Charter school opponents are gearing up for multiple protests—including an overnight vigil Tuesday sponsored by the Chicago Teachers Union—as Chicago’s school board considers adding more charter schools to its portfolio.

The board’s scheduled vote Wednesday on whether to add up to 17 more schools to the system comes just eight months after Chicago closed a historic 50 schools. Another 10 charter campuses already have permission to open in fall of 2014.

Charter protesters cite varying reasons for their opposition: some are union supporters, and most charters aren’t union.

Others, like Prosser Career Academy ninth-grader Lizette Lopez, think money and improvement efforts should be put into existing schools.  She spoke Monday from the site of one of the proposed charters, which is directly across the street from her high school.

“My school is a great school, and it would be even better if they actually started investing in it, instead of spending …on unnecessary schools in my community.  How does even making a new school even make sense?” she asked Monday afternoon at a protest organized by students and community groups, among them Citizens United for Quality Education.

Zerlina Smith is mad her tax dollars could go to politically connected landlords, who plan to rent space to charters.

And Darryl Truss of the group Raise Your Hand questioned why a church group with no experience running a school would be tapped to open a charter in Austin, where four schools were closed in Chicago’s massive school closure.

Behind the protesters, bulldozers rumbled through the Rubenstein Lumber site where Noble Street Charter Network is proposing to locate its 15th campus. (The board will consider a 16th Noble Street campus to be located temporarily in the Loop.) Protesters blasted the charter school network and CPS for moving ahead with demolition at the site even before the school board votes.

In May, CPS closed 50 schools on grounds of declining enrollment. But in a Request for Proposals issued in August, officials invited charter schools to submit proposals for new schools to help relieve longtime school overcrowding on the Northwest and Southwest sides. In the past, the district had prioritized charter schools locating in areas that lacked “quality” school options. Those were often areas where enrollment was declining as well. 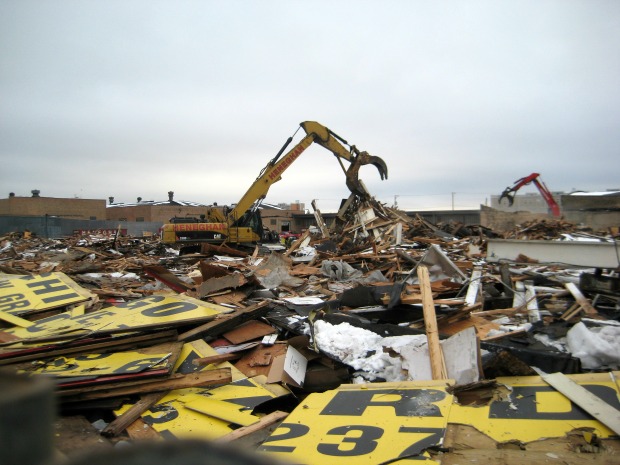 The activists protesting Monday said based on the school board agenda and the charter schools’ proposals, they could find only two schools that fell within the wide swaths the district identified as priority areas.

The Noble Street campus to be located at 5321 W. Grand Ave., for instance, is technically about a half mile outside the priority-area boundaries identified on a map in the RFP.

But Noble Street spokeswoman Angela Montagna says her organization has always considered that site part of the Belmont-Cragin neighborhood, identified as overcrowded. Montagna said about 400 students from the neighborhood are enrolled at other Noble Street schools, showing “there’s demand there for a Noble education,” she said. Montagna also said construction on the site would stop if the board votes down the Noble campus, but she said in order to get a school up and running by the fall, demolition needed to begin. The school’s construction will be privately funded.

Noble Street high schools—where students apply and are selected by lottery—post strong ACT scores in the city, though officials admit about 35 percent of Noble students don’t make it to senior year. They transfer to other high schools or drop out before then.

Chicago Public Schools has been unclear about the actual number of charter schools the school board will consider Monday—saying as recently as last week the board would vote on 21 proposed schools. CPS spokesman Joel Hood now says the district received proposals from nine organizations hoping to open 22 campuses. He says four of the proposals were withdrawn by the operators. The district now counts 17 schools up for Wednesday’s vote, but five of them would service dropouts, a separate type of charter school.

Hood says by CPS’s count, five proposed campuses serve the prioritized Northwest and Southwest sides, including the Noble campus. He says ultimately it comes down to this: Who would argue with having another really high performing school in the neighborhood?

Normally by this time, district administrators would have made public which charter schools they think should be approved by the school board. But this year, for reasons it has not explained, the district is not making public its recommendations until the morning of the vote.

School districts in Illinois are required to consider charter proposals annually. Any denied charter can appeal to a state charter commission, which can overrule the district and order the school be opened.

Charter campuses to be considered by the school board Wednesday:

Linda Lutton is a WBEZ education reporter. Follow her @WBEZeducation.