Lisa Doi grew up on the North Shore and went to North Shore Country Day School, a long way from the University of Pennsylvania, where she now studies anthropology and urban studies. The distance didn’t stop her from thinking of home when she posed this question:

At Curious City we often track down the most learned experts we can find to answer questions, but at Lisa’s request we didn’t turn to academia, interest groups or City Hall. And in lieu of precise surveys conducted in and limited to our region, we’re betting that people across the region are themselves equipped to take on this question.

We used data from the 2010 American Community Survey to identify places that showed radical differences in income and education. Then we took a road trip — microphones in hand — to hear what the American Dream means to residents in each area. Unscientific? Obviously. But, again, we’re hoping these accounts can spark a conversation on this question … and maybe that will lead to a solid answer. Of course, it becomes more so as we hear more voices, so feel free to sound off in the comments section or on Facebook or Twitter.

Below, you hear accounts gathered from areas that match Lisa Doi’s criteria of parts of our region that “differ across socio-economic class.” We now turn to you: Do you hear a difference? 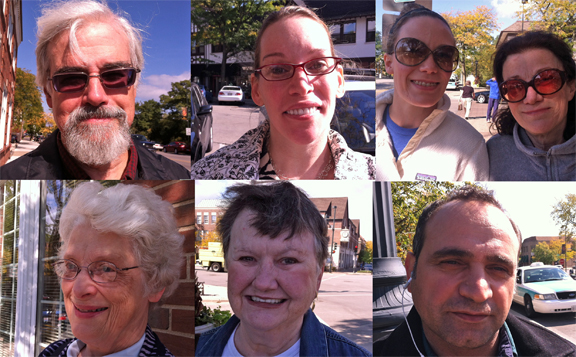 Driving through North Shore Winnetka feels a little more like driving through an outdoor museum than it does a neighborhood. The streets wind between trim and spacious front yards, dotted with maple and ash trees. Most of the houses are two or three stories high, filled with families and maybe a dog or two. We found landscaping crews mowing lawns and blowing leaves off of upscale cars — often, two or three are in each driveway. Downtown Winnetka features a cobbled street with intricate light fixtures and a handful of boutiques and cozy brunch spots.

The folks we spoke with weren’t all from Winnetka, but were from suburbs along the North Shore. They mentioned family, education and home ownership when talking about the American Dream. There is an expectation to own — not rent — your own house, though people may hide their mortgage situations from each other, as one resident explains.

“I know on our street there were husbands who hadn’t been able to find a job in five years,” she said. “There were wives that were making two and three jobs because the husband has been cut back on hours. They just don’t talk about it.” 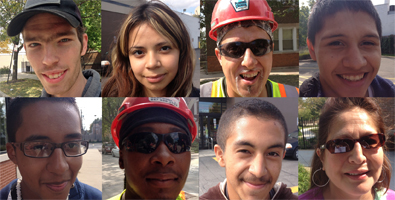 On the surface of this South Side neighborhood that’s dotted with small bungalows and tiny, fenced-in yards, things look fine. On the Tuesday we visited, people were out and about, running errands or coming home from school. But a few folks said the neighborhood was dangerous and getting more so. In particular, they cited an increase in gang violence.

In Mckinley Park we met Martin Salgado and Raymundo Menendez, two undocumented immigrants who are attending high school and hope to become U.S. citizens. Both said their American Dream is to finish school, get jobs and help out their families. They both said that’s achievable: All they have to do is work hard.

We also meet Rochelle Santiago, who takes pride in having a stable place to call home. She said a lot of people don’t even have a roof over their heads.

“So, I’ve accomplished something,” she said.

Another man, John, told us the American Dream isn’t about having “a million dollars” — it’s about working hard.

People we met in McKinley Park seem to relish in modest victories, taking their American Dream step by step. We didn’t talk to anyone who equated the American Dream with luxury or money alone. We did hear a lot of people say their dream and goal is to just be comfortable.

On a single street on the North Side’s Albany Park neighborhood, we found an Israeli-owned body shop, a Cambodian museum, a Mexican grocery store and lots of Middle-Eastern restaurants. We found people working and heard many different languages being spoken. The area has lots of apartment buildings, a handful of which are landscaped, and city buses are packed with people commuting in either direction.

We found Brenda Gucman doing laundry at Rags to Riches Laundromat. She told us she’s starting her own business selling things online. She added that starting something new is always a little nerve-wracking, but she’s sure something good will come of it. Her goal is to make more money than she does now.

We met several people like Brenda when we visited Albany Park. Many expressed confidence in entrepreneurship and resourcefulness, in other words, people hopeful in refitting the American Dream.

Just over the Indiana state border lies East Chicago, where we found people talking about “making it” in the world. A lot of people told us about living on government benefits and “waiting for their checks to come,” as Salena Colon, who lives there, explained. She said she knows people in town who have jobs at K Mart or McDonalds, but that’s about it.

We found two crossing guards (both women) who were sitting on a lopsided bench in a razed residential field between a nearby elementary school and the city’s main street. That’s where we asked them about the American Dream.

“It’s hard when all you know is the area you grew up in,” one of the women, Tamika, said, while tucking her arms inside a gray hoodie. Tears filled her eyes when we asked if she could imagine something better. She shook her head no.

The other crossing guard, Iesha, jumped in to tell us the American Dream is “anywhere but here.” 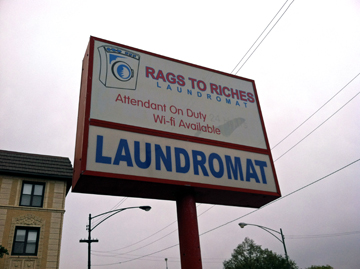 This question was reported collaboration with WBEZ’s Front and Center series. This month they’re reporting on economic mobility in the region. For more stories, click here.