The Chicago Democrat said Wednesday the timing will depend on an event involving activists and advocates in support the measure, saying he hopes to include everyone who fought to pass it.

When Quinn signed Illinois' civil union bill in January 2011, about 1,000 people attended the event at the Chicago Cultural Center.

Just hours after the state Legislature approved the bill Tuesday, State Rep. Sam Yingling of Round Lake Beach proposed to his partner at a celebration at the Governor's Mansion.

The Democrat says he's been carrying a ring back and forth to Springfield for about a year, waiting for the chance to propose. The couple, who have been together three years and have three children, plan to get a marriage license as soon as the law goes into effect in June.

Illinois will be the 15th state along with the District of Columbia to allow same-sex couples to wed. It is also the third state in the Midwest to do so, following Minnesota and Iowa.

'America is a Journey'

The state House of Representatives approved the bill Tuesday by a vote of 61-54 with two voting present. The state Senate approved the measure in February, but for procedural reasons it was voted on and passed there again.

“At the end of the day, this bill is about the vision that the founders of our country had and wrote into our constitution,” said the bill's sponsor, Chicago Democratic Rep. Greg Harris. “They said America is not a destination. America is a journey.”

The nearly three hours-long debate on the House floor Tuesday proved how divisive same-sex marriage remains — even though Democrats maintain a supermajority.

“You already have civil unions,” Rep. David Reis (R-Olney) said on the floor Tuesday. “You admitted two years ago that’s all you wanted. Let’s just leave it at that and honor the most basic tenet of our state and federal constitution: religious freedom.” 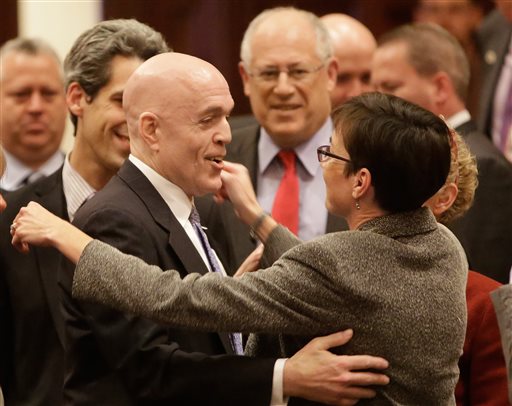 Earlier this year, lobbyists in favor of gay marriage pushed hard for a vote before lawmakers adjourned from the spring session, which ended in May.

Instead, Harris gave a tearful speech from the House floor, saying he simply didn’t have the required support to call for a vote.

With the bill stalled, leaders of several black mega-churches organized aggressive robocalls in the districts of black House members for months, placing the mostly Democratic black caucus in the spotlight. Many of those caucus members remained undecided until the last minute.

Meanwhile, supporters of the bill tried to woo Republicans with fundraisers for those who would vote in favor of it.

Advocates credit final passage to House Speaker Michael Madigan, who called for on-the-fence lawmakers to vote in favor of the bill.

“For those that just happen to be gay living in a very harmonious productive relationship ... who am I to judge that they should be illegal?” Madigan said. “Who is the government to judge?”

“This is a deeply personal and emotional issue for individuals on both sides," Durkin said in a statement to WBEZ Thursday. "I’ve said all along that the individual members of my caucus must each vote for their own district, and conscious, and be prepared to go home and answer their constituents."

State lawsuits to be withdrawn

Advocates have also been pushing for gay marriage through the legal system.

If and when Gov. Quinn signs the bill, those lawsuits will likely be withdrawn, said Camilla Taylor, a lawyer for Lambda Legal, one of the groups that challenged the state law.

But with an effective date of June 2014, the issue is still expected to be a factor in the race for Illinois governor — especially in the competitive Republican primary.

Listen back: Stories and conversations leading up to SCOTUS' gay marriage decision

Note: This story has been updated to include a statement from House Republican Leader Jim Durkin.