As Americans become more discriminating about the provenance, treatment and sustainability of the animals they eat, the market has brought them pastured pork, heritage chicken and grass-fed beef.

But one of the most sustainable meats of all may still prove too cute for many consumers.

It’s rabbit--and Kankakee County farmer Kim Snyder has recently joined the ranks of the more than 27,000 American farmers who raise them (up from just 4,300 in 2002).

But unlike most rabbit farmers, Snyder (who also raises pastured Berkshire hogs and Belted Galloway cows) is raising these lagomorphs on free range.

“I’ve been training them to range outdoors and it’s been fairly successful,” said Snyder who owns Faith’s Farm. “I have 32 acres and I’ve seen them range off my acreage but they still tend to home in on my pond because I am their only continuous water source.”

Snyder’s target breed is the heritage Silver Fox a rabbit on the critically endangered list, which is why she chose them.

“If people taste this meat, which I think is superior to hybrid animals, then farmers will raise it,” she explained. “So it’s truly conservation through consumption. You can see some breeds go from critically endangered ... to threatened ... to not being on the list at all."

So what does it taste like? Snyder invited a bunch of Midwest chefs out to her farm to help process them, cook them and taste for themselves.

“I would say the meat is milder [than standard rabbit meat which tastes like slightly gamey chicken meat] because it’s not been raised on pellets,” she says. “These rabbits eat hay and grass.”

Letting rabbits roam around 32 acres and then trapping them when it’s time to go to the butcher is not the most efficient way to produce meat. Some rabbits will inevitably be picked off by coyotes, minks and other predators. And others may avoid the traps. But Snyder--whom I’ve known for five years and (full disclosure) now consider a friend--says she’s committed to letting the animals lead normal lives for as long as possible.

As she prepares to start offering them to Midwest chefs, the farmer says she plans to charge about $10 a pound for her rabbits. And they’ll arrive on a restaurant scene that’s already hopping with rabbit dishes.

At Chicago’s six-month-old Osteria Langhe, in Logan Square, braised rabbit or “coniglio” has emerged as one of chef Cameron Grant’s signature dishes. He says customers order about 100 servings of it a week.

“They love it,” he said. “We wrap it in pancetta and then slow cook it for about four hours and it just becomes incredibly moist. Then we sear it off to order and then cut it and put it on the plate with a sauce of sweet red and yellow peppers.”

Grant lived and cooked in the Piedmont region of Italy, which is the inspiration for the menu at Langhe. There, he says “they don’t use chicken. So rabbit really is the chicken of Piemonte.” 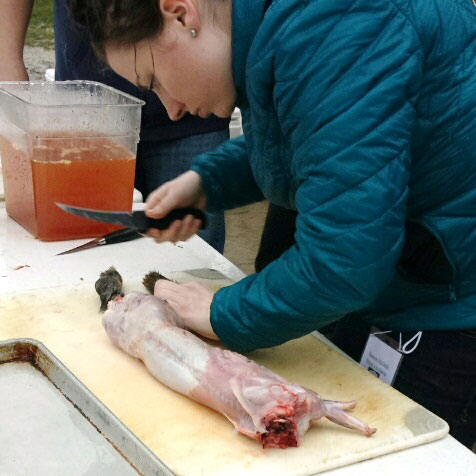 Rabbit has also leapt on to the menu at Table, Donkey and Stick in Logan Square. There, chef Scott Manley offers rabbit liver mousseline with sweetbreads but also a popular whole deboned rabbit cooked sous vide and then quick roasted to order.

“So it comes out and it’s sort of like a rabbit steak almost,” he says.

The meat shows up in three dishes at Mercat A La Planxa downtown and even barbecued at Frontier in West Town. And at Glasserie in Brooklyn, a $76 rabbit entree has become one of the hottest meals in New York.

As more consumers seek out sustainable meat this fast growing lagomorph--no, rabbits are not rodents--fills the bill quite nicely. In fact, according to the United Nation’s food organization you can produce more than four pounds of rabbit meat with the same amount of feed it takes to produce just one pound of beef. Additionally, rabbits can start reproducing at just 6 months old.

“I think our customers will be OK with it,” says Latimer. “But I think the mass market will be harder to crack--mostly because of the adorability problem.”

Indeed, the adorability problem remains a hurdle--even for some who don’t mind eating other animals. Whole Foods Market learned this last month when rabbit lovers protested the store’s pilot program to introduce rabbit to its meat counters. They argued that rabbits are pets, not meat.

Ironically, before introducing rabbit to select stores, Whole Foods spent years developing better animal welfare standards for farms that raised rabbits. But, for many in the US, the meat is still too closely connected with pets, the Easter Bunny and even Bugs Bunny whose cartoons--think the Hasenfeffer episode-- didn’t do much for the image of rabbit eaters.

Even if American rabbit consumption never reaches World War II levels (when rabbits were considered a patriotic meat animal to raise in homes) or even to European levels, Grant and others think acceptance will only continue to grow.

“I think it will,” he says, “It’s a great, versatile protein that offers intrigue and excitement.”