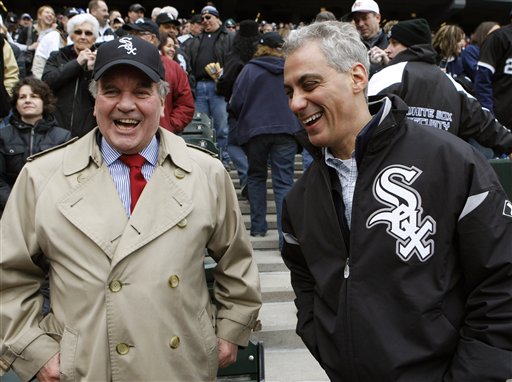 Lead story: Mayor Daley was the Honey Badger of politics: He took what he wanted and didn’t care. And yesterday Mayor Rahm Emanuel endorsed one of Daley’s most controversial acts as mayor: the midnight bulldozing of Meigs Field. While Rahm didn’t come right out and say, “Yeah, I’m glad he bulldozed that place,” he didn’t really do much to say how it should have been done differently. When asked about the controversial way Daley went about claiming the airport, Rahm hemmed and hawed before voicing vocal support for turning the airport into a park. “The plan developed for this was the right thing to do,” he said. Rahm made the comments at a press conference announcing future developments to the now-a-park area, including a new expanded camping program for inner-city kids.

Also: Speaking of Daley and Rahm, there’s a new controversy surrounding some security guards let go in the transition from one mayor to the other. Eleven Chicago Police officers have filed a federal lawsuit claiming they were dismissed for political reasons, alleging Rahm replaced them with officers who had worked his campaign detail. There’s also a discrimination element to the story; the officers, who are white and Latino, claim lower-ranking African-American officers were kept on and not demoted. Attorneys for the former security guards claim the dismissed officers should have been protected by the city’s Shakman decree, which is supposed to prevent politically-motivated hirings, firings, demotions or dismissals. The first two stories this morning are another reminder that the more things change…

And then: To new residents and tourists: It’s not Red Dawn, it’s just the annual Air and Water Show. Thousands of people will flock to beaches and rooftops this weekend to check out the loudest spectacle of Chicago’s summer, complete with the Blue Angels. Residents like to complain about how disruptive the noise is, particularly the practice runs on Thursday and Friday. Still, it’s part of summer in Chicago, as much as the thousands of dirt-caked hipsters who trample through the Loop after Lollapalooza lets out, or the unending fireworks displays throughout city neighborhoods on the Fourth of July. If you don’t like the noise and haven’t figured out by now that this is the weekend to schedule your trip to Lake Geneva, I don’t know what to tell you. Enjoy seeing fighter jets cross the sky and embrace the gorgeous weather.

Anniversary: Fifty-three years ago today Miles Davis’ Kind of Blue, one of the greatest jazz albums ever made, was released. And that, frankly, is as good a reason as any to listen to it, a smooth ride on a Friday morning before the jet engines settle in. Listen to it on Spotify or on MySpace (no, really).

Elsewhere: The three members of the band Pussy Riot on trial in Russia were found guilty of “hooliganism motivated by religious hatred” … Life imitates art … Ted Nugent and Dave Mustaine are idiots … Even right this second, you are consuming a ridiculous number of words every day … A Texas pee-wee football league does a big kid wrong … OK, this is a little ridiculous, even by Chicagobama standards … The Onion tags HuffPo pretty well.

Looking ahead: Musician Tom Schraeder is throwing a month-long celebration of Chicago’s arts scene and it’s going to be awesome … The Annoyance Theater continues celebrating 25 years so here’s a nifty feature … Apparently the post-Lollapalooza repairs at Grant Park aren’t going as swimmingly as first thought, so you know our guy DeRo is all over it … StoryCorps is in town through mid-September at Millennium Park and our South Side bureau … More on the ongoing battle for an elected school board … Our crazy uncle Rep. Joe Walsh still doesn’t get it … The ward remapping cost us (taxpayers) over $1 million.

Sports: Truly, the worst Urlacher news this week … Derrick Rose is two to three weeks ahead of his rehab schedule but given the vague eight-to-twelve-month window for his recovery, pinpointing a return date is still impossible … The new Notre Dame uniforms are ridiculous in all the wrong ways … Steve “Mongo” McMichael is eyeing a mayorship in the burbs but he’ll always be one of the latter day Four Horsemen to me … The WNBA, where a match-up doubles as a declarative sentence.

Finally: Guys, can we talk about the Mars Curiosity rover for a second? I’ve had a lot of free time this summer so I’ve been watching episodes of science shows like The Universe and How The Universe Works because I’m a nerd like that. I’m continually mystified by the wonders that surround us beyond our atmosphere and, by the way, we landed a vehicle the size of an SUV on Mars. You guys, seriously, how crazy is this?! Mars! I can’t for the life of me get a decent 3G signal on my phone in this town but that’s irrelevant because we just put a vehicle on Mars like it’s no big deal. And this is hardly the first time. Here’s a video that reiterates the fact that we just landed a vehicle on Mars. [via The Aggregate]