The ad appeared in the Tribune on January 29, 1857. James Hollingworth was prepared to move or raise your building. In 1857 Chicago, that was a booming business.

The city had been built on marshy ground near the lake. As the population grew, this became a public health problem. Cholera outbreaks were frequent. In 1854 alone, the disease wiped out 1 in 20 Chicagoans.

City officials decided to construct a sewer system–that would take care of the deadly waste. Drainage would be difficult, since Chicago sat only a few feet above Lake Michigan. There were two options: (A) abandon all of downtown and start over on higher ground, or (B) jack up all the buildings where they were.
The city chose ”B”.
Starting in 1856, Chicago raised itself out of the mud. Buildings were jacked up as much as fourteen feet, and new foundations put under them. Then the sewers were constructed on top of the old street level. When the sewers were completed, they were covered over and the land filled in to meet the new level of the buildings. The last step was paving new streets on top of the fill.
As mentioned, many people went into the building-raising business. One of the most successful entrepreneurs was a young cabinet maker named George Pullman.
Pullman contracted to raise an entire block on Lake Street at the same time. He had 6,000 jackscrews put under the buildings, and hired 600 men to take charge of ten jacks each. On the signal, each man turned the screws on his ten jacks one notch. The buildings went up a fraction of an inch. 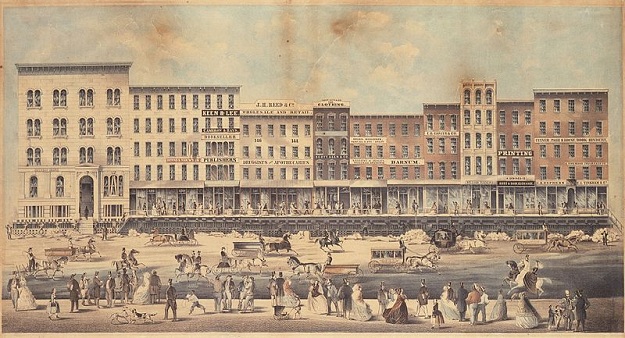 This process was repeated again and again over four days. Meanwhile, temporary timbers were placed under the buildings and new foundations constructed. Then the buildings were lowered into place. All this was smoothly done, while business inside the buildings went on as usual.
Sometimes putting a new foundation under a building wasn’t practical. In that case, you hired a moving company. They would put wooden logs under your structure and roll it to a new lot. Chicagoans got used to the sight of buildings slowly advancing down the middle of the street.
Raising the city took nearly twenty years. In the end, Chicago had the most modern sewer system in the world, and public health was much better.