Visitation and funeral arrangements are at the bottom of the story

Chicago’s Cardinal Francis George is being remembered as a kind, devout man whose strict view of church teachings was applauded by some and called rigid by others.

George, who stepped down from his post late last year to fight cancer for the third time, died at home on Friday. He was 78.

He  was the leader of 2.2 million Roman Catholics in Lake and Cook Counties for more than 17 years. He retired in November 2014 due to his health.

When asked at the time about his legacy, George told WBEZ:

“I just hope people remember I tried to be a good bishop. It is administrative. You have to take care of the institutions that protect the mission. What I discover now in many letters is truly touching because people write and tell me, ‘You don’t remember me, but 10 years ago or five years ago, I was transformed (or helped anyway spiritually) by something you said or you did.’ And when I hear that, I realize the Holy Spirit is making use of me to make his people holy. And that’s all the legacy I want. It’s an unknown legacy. It has to be because it’s invisible. But if you touch people, your work lasts forever.”

George was the first Chicago native to become archbishop here. But he gained renown far beyond the Chicago region.

As former president of the U.S. Conference of Catholic Bishops, the cardinal led high-profile fights against same-sex marriage and the Obamacare contraception mandate. He was internationally known as an advocate for religious liberty.

“We’ve always been able to fall back on the law to protect us,” George said. “Now we feel it’s the law that’s writing us out of the American consensus, and it’s a huge cultural problem.”

He often said he viewed things as either gospel truth, or not: “Jesus didn’t die on the cross so you could believe anything you want to. There is a faith. You can say, ‘I’m Catholic but I don’t believe this, I don’t believe that.’ Well, you’ve created your own church."

That stance won him many fans, including Mary Anne Hackett, who heads the conservative Catholic Citizens of Illinois.

But George’s tenure wasn’t without controversy. Supporters and critics alike described him as a reserved but kind man with keen intelligence and a quick wit.

They shared Hackett’s respect for how he publicly endured both cancer and complications from polio, which he’d contracted as a teen.

“I was impressed that during all the time that he’s been fighting these cancers, he’s had an unbelievably busy schedule,” Hackett said. “It’s really been admirable, and it’s been a wonderful example to all of us how he has withstood this suffering and done his duty.”

While George’s strict interpretation of church doctrine won praise from many, it drew criticism from others.

“Certainly if you’re a progressive Catholic, your view of him was tainted by his stance on things,” said Linda Pieczynski. She’s the long-time former spokesperson and president of Call to Action, a national group of progressive Catholics based in Chicago. She’s active in Dignity USA, which supports LGBT rights in the church.

“But I do think he was a good man,” Pieczynski said. “I don't think we harbor any anger toward him as an individual. I think we recognize he was a product of his time and upbringing and being in a very isolated clerical culture. It would be surprising if he had been more open about dialoguing with people.”

She lauded George’s stances on immigration reform and helping the poor. But she said his opposition to same-sex marriage and women in church leadership could be “tone-deaf.”

“He just did not seem to want to engage in a dialogue about these types of issues,” Pieczynski said. “It was very dogmatic — this is what the church said, this is what it’s always going to say and it’s going to be that way forever. And of course, that’s not true. Church teachings evolve.”

The cardinal asked some priests who openly supported women’s ordination - a stance against church teachings — to apologize.

In 2011, he likened gay Pride Parade organizers to “something like the Ku Klux Klan” when he feared the parade route would disrupt mass at a local church. He later apologized for the remark.

Dignity Chicago spokesperson Chris Pett said those remarks were hurtful and alienating for LGBT people and their families.

“In some ways he tried to provide ministries to LGBT Catholics. Leadership from Dignity met with him, and we were always treated with respect and enjoyed his intelligence and wit,” Pett said. “But like many church leaders, his opposition to marriage equality put the church on the wrong side of history, and he made many Catholics, straight and gay, question whether they were really welcome in the church.”

Pieczynski reserved her sharpest criticism for the cardinal's handling of the priest sex abuse crisis.

On the one hand, the cardinal was credited with leading a delegation to press the Vatican on a zero tolerance policy for priest sex abuse, which led to a series of reforms in 2002. And a review of thousands of pages of church records showed he did more than his predecessors to help victims and report abusers to police and prosecutors, rather than just moving credibly accused priests around to different parishes. After the 2002 reforms passed, George moved to pull numerous priests from active ministry and to defrock some of them.

But he still let some priests stay in their positions despite abuse allegations, and sometimes even after the church review board recommended their removal. Most notably, Pieczynski said, he didn’t act quickly enough to get rid of Daniel McCormack, who molested numerous boys before being arrested and defrocked.

“I really thought he got it, which is why is was such a disappointment when he didn’t follow his own rules in terms of removing Father McCormack,” Pieczynski said. “And that was a real tragedy, a Shakespearean tragedy, in terms of here was a person who knew better.”

George said he was “saddened by my own failure, very much so."

“Oh, by far, the most difficult challenge has been the terrible fallout from the sexual abuse of children by some priests,” he said. “I pray for victims, I’m concerned as we try to accommodate victims and help them. That’s been the overwhelming weight in a sense that has stayed with me.” 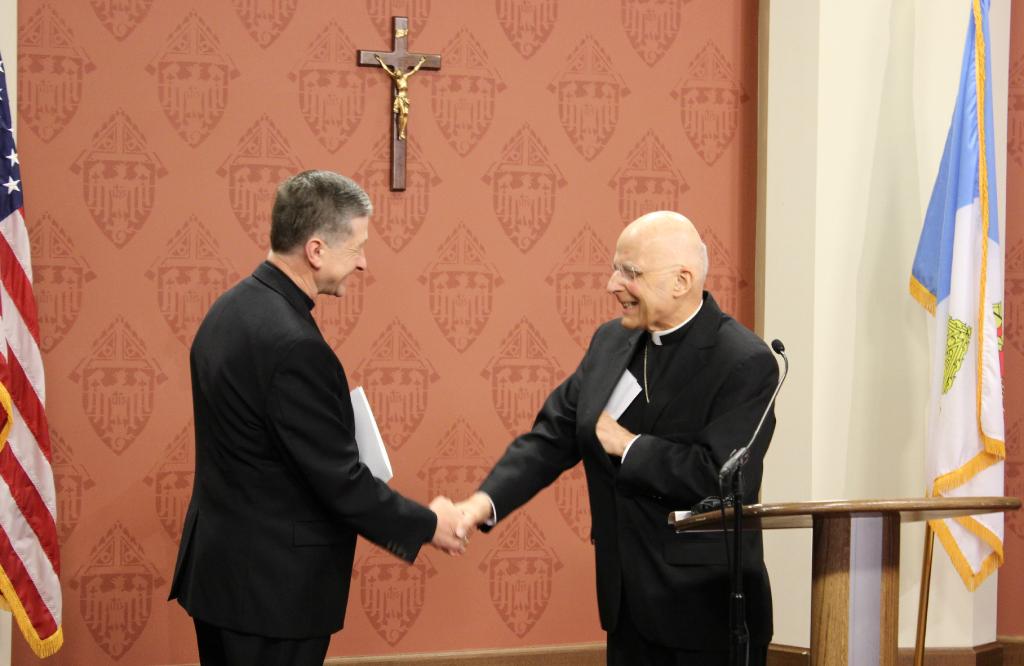 Near the end of his tenure, the cardinal reflected on his accomplishments and his regrets.

“I regret very much mistakes that were made, particularly if people were hurt. I regret that I tried sometimes to listen but didn’t succeed either in understanding or agreeing, and I couldn’t, I didn’t think sometimes. I regret a certain bitterness that you find occasionally in people,” he said, adding he also was encouraged by all the good and holy people he met at various parishes.

George gained national and international prominence for his defense of religious liberty and his warnings about the dangers of growing secularism.

Locally, he steered the Archdiocese through the Recession, was a staunch supporter of Catholic schools, and worked to improve the seminary, lay ministry and catechismal programs — anything, he said, that affected people.

George was honored by the Jewish and Muslim communities for working to improve dialogue with them.

He also served as chancellor of Catholic Extension, a national group that sends funds and other resources to poor Catholic communities.

Catholic Extension President Father Jack Wall, the longtime former pastor of Old St. Patrick’s Church, called George a “man of deep faith, of great wisdom,” with a “missionary heart” in his desire to help the poor.

“Cardinal George was not a very demonstrative person in terms of his emotions but at the level of conviction he was very, very strong,” Wall said, pointing to George’s correspondence and meetings with many of his fellow cancer patients. “Many of (his) acts of kindness and compassion were felt on a really very personal level.”

“Something I admired greatly in him, he was very direct. What you saw was what you got,” Father Senior said. Even though some found that trait difficult, Senior said, that clarity of view made the cardinal a touchstone for Catholics. He said George's deep religious belief was the key to the man.

The cardinal himself said he never expected to become a bishop.

George first felt a pull toward the priesthood while receiving his first communion. Then polio struck when he was 13, and Quigley Preparatory Seminary turned him away. He found another religious school downstate and later joined that order, the Missionary Oblates of Mary Immaculate.

He started as a theologian, earning master’s and doctorates in both philosophy and theology. He quickly rose through the ranks of his order before being appointed bishop of Yakima, Wash., and then Portland, Oregon. Then he returned home to Chicago as archbishop. He described his path as one of obedience.

“Many times I heard Cardinal George say he wanted to be a pastor, but his job prevented it, and I think that with all the administrative things at times kept him from being just a priest and the pastor that he sort of yearned to be,” Father Senior said.

The cardinal had hoped to spend his retirement speaking and writing, but mostly focusing on doing pastoral work at local parishes like hearing confessions.

But the cancer didn’t leave him much time.

“The skill of living is to live as if you’re going to die tomorrow and still do your job,” the cardinal said. “In a sense prayer does that. You live for a while in a moment where you’re not in charge, you’re just at God’s disposition. And as long as that’s the case, then, well, I don’t want to die tomorrow, but if I did, I’m sure the Lord would still be providential in his care of the Earth. It doesn’t depend on me.”

Schedule of Services and Public Visitation
All services, including public visitation and the Funeral Mass, will take place at Holy Name Cathedral (http://holynamecathedral.org/), State and Superior Streets in Chicago. Immediately following the Funeral Mass, the Committal Service will take place at All Saints Cemetery, 700 North River Road in Des Plaines. (http://www.catholiccemeterieschicago.org/locations.php?cem=2). Per the Cardinal’s wishes, he will be buried in the George family plot. (Open to the Public)

In lieu of flowers, donations to the Cardinal’s favorite charities will be appreciated -- Priests Retirement and Mutual Aid Association (PRMAA) (https://www.givecentral.org/location/91) or To Teach Who Christ Is (https://givecentral.org/ttwci/), a campaign to support scholarships for students in Catholic Schools.