In most Chicago neighborhoods, the local high school is seen as a last resort.

Students are scattering across the city to more than 120 schools – with most bypassing the school down the block in favor of test-based schools, specialty programs or even a neighborhood school in a different community. Nearly 76 percent last year opted against their assigned neighborhood schools, according to data from Chicago Public Schools.

An effort is underway to revive these neighborhood institutions, with the goal of giving students more options close to home and reducing the pressure many middle schoolers face to earn top marks in order to win coveted high school seats. It’s been a challenge across the city but in a few schools – mostly on the North Side – there are glimmers of reinvestment in the local public high school.

For years, where Chicago eighth-graders have landed for high school has tracked closely with how well he or she scores on middle school standardized tests.

“Everyone was saying, ‘You should go here. No, go here. Oh, that place is absolute trash, you should go to this place, it’s so much better than the rest,’” Prendiville said.

Admission to one of the city’s top schools requires straight A’s in seventh grade and a near-perfect score on a standardized test. Though Prendiville is in a gifted program at Coonley and probably could have qualified, she wasn’t interested. For one, the closest selective school to her house – Lane Tech College Prep – is a big school.

“It’s monstrous,” she said. “I know people who actually call it the Hogwarts of Chicago.”

For next year, Prendiville opted for her local neighborhood high school, Amundsen. She enrolled in the school’s International Baccalaureate program and hopes the school will help her develop her skills as an artist. She said the school felt like a better fit. 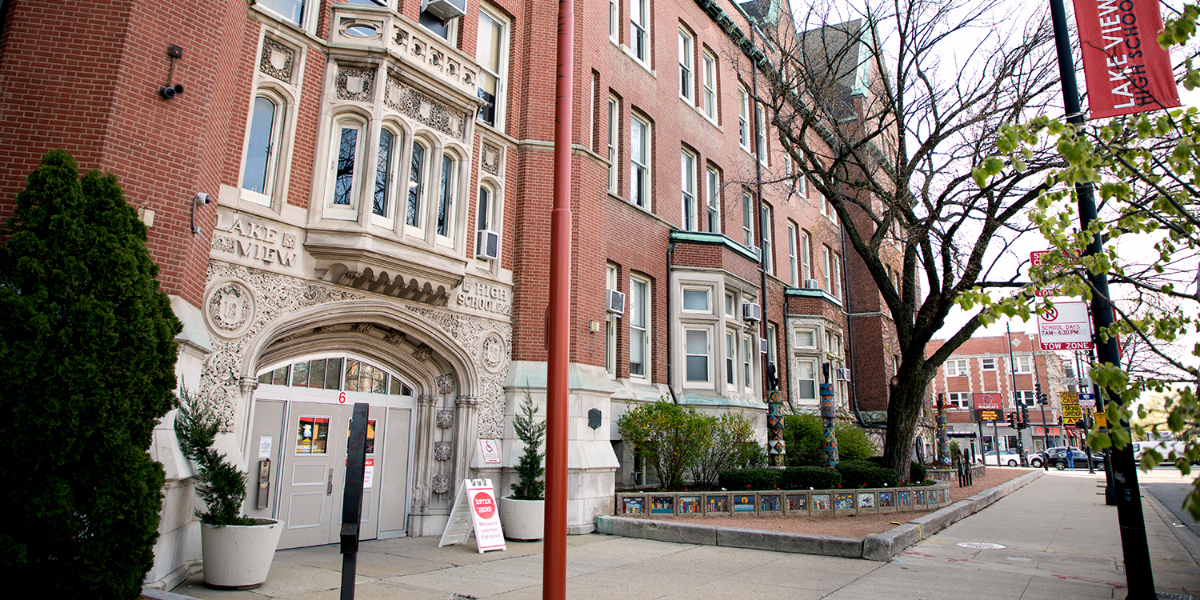 ‘A waiting room for the suburbs’

The areas around Amundsen High School and nearby Lake View High School are home to many middle-class and affluent families. But the schools have long been dismissed by most local residents. Data show less than a third of the students enrolled live within the schools’ boundaries.

Ald. Ameya Pawar (47th Ward), who has worked with neighboring Ald. Patrick O’Connor (40th Ward) to renovate parts of Lake View and Amundsen, said he could see the trend just by looking at how the size of a class declines as students move into the upper grades of the local elementary schools.

“Parents start making decisions about where they’re going to live based on whether they think their child is going to get into selective enrollment or not and that is a problem for the city,” he said.

Pawar, who is a Democratic candidate for governor, said neighborhoods like his are considered by many to be a “waiting room for the suburbs.”

“But imagine if you could keep those 90 kids or 100 kids that started kindergarten... all the way through high school and then you get another group of 90 kids behind them,” Pawar said. “You would start to see real population growth in Chicago.”

Pawar helped launch a local nonprofit called GROW Community. The group works to connect area elementary schools with the two local high schools to show parents there’s an option nearby where their children are guaranteed a spot.

Every time a student enrolls at Lake View or Amundsen, the school gets a boost. Extra public money comes with every child, opening the door for new or expanded programs. That attracts more students and so on. 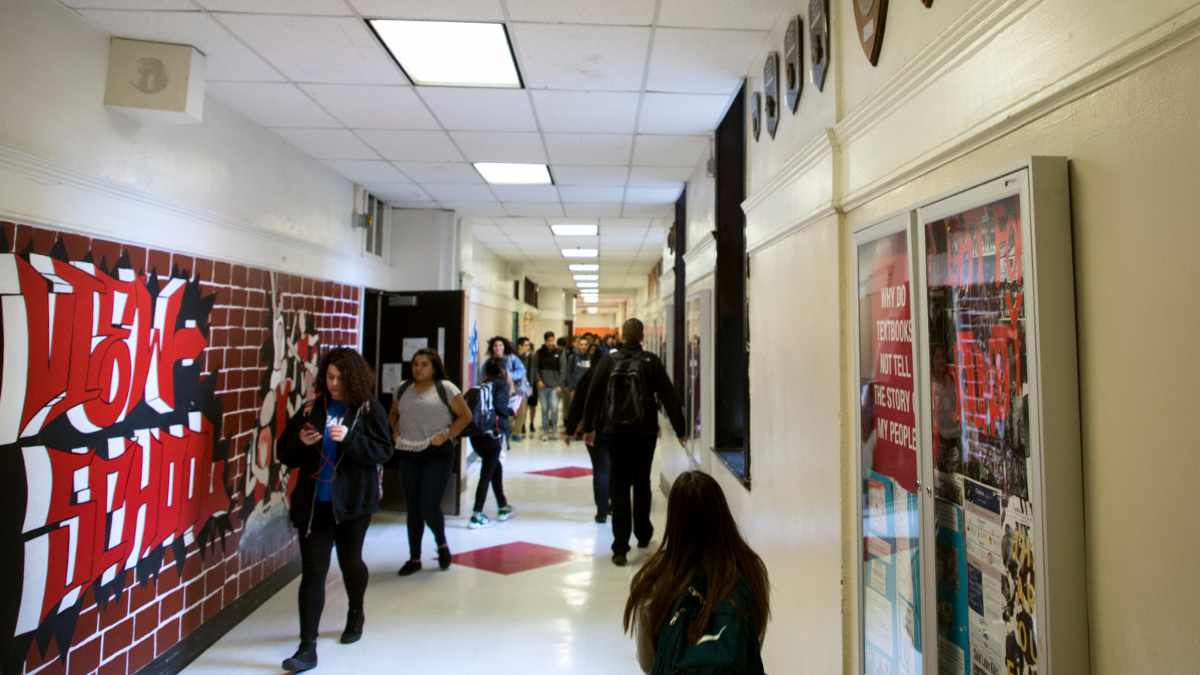 Beneen Prendiville, Yasmine’s mom, helped launch and now leads Friends of Amundsen, a nonprofit marketing and fundraising group for the school. She said many of the middle class and affluent families in the area harbor powerful misconceptions about the schools.

“The first things people would ask me about is safety,” Prendiville said. “You know, ‘I hear this, I hear that, I see there’s a police officer out there, I hear about violence and this and that.’ And I’m like, none of that’s true.”

CPS parent Amy Smolensky heard the same thing a decade ago when she sent her son, Nathan, to kindergarten at her local public grammar school, Burley Elementary.

“People were leery of their neighborhood elementary schools or felt that they had to move to the suburbs or go to a private school or find another option,” said Smolensky, who lives in Roscoe Village. “This kind of huge shift has happened in elementary school and now that’s sort of bubbling up to the high schools.”

“The neighborhood schools around the city, you know there’s great things happening at them and that’s been happening for many, many years,” Smolensky said. “It’s just that the perceptions – for some deserved and a lot of undeserved reasons because of incidences that maybe happened 20 or 30 years ago – just stuck and that’s not what’s happening. These are really great environments for learning.”

Paul Karafiol, the principal at Lake View, said it’s important to just get people in the building to see the kind of teaching and learning going on at the school. They hold tours and open houses on an ongoing basis.

Also this year, Lake View started offering to have small groups of eighth-graders from two nearby grammar schools – Blaine and Ravenswood – attend geometry class at the school.

CPS data shows a small bump in freshmen at both schools this year. But the number of kids from the immediate area remains flat. Numbers for next fall’s freshman enrollment are not yet available. 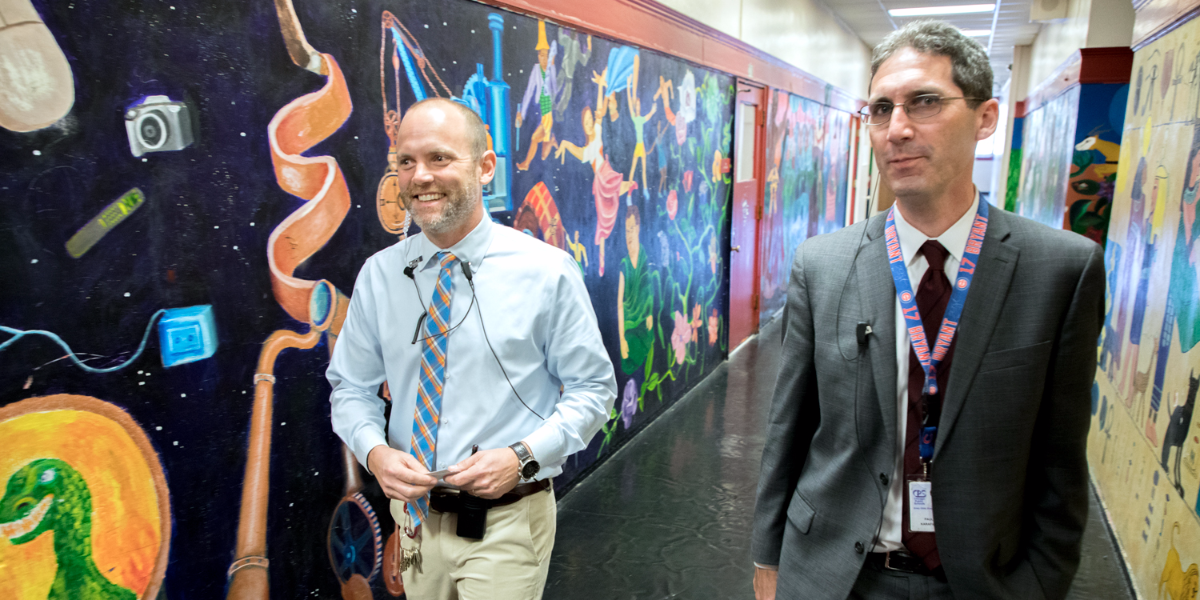 Amundsen and Lake View have seen relatively stable enrollment in recent years. Students from across the city attend both schools. About 60 to 70 percent of the students are Latino, with the rest roughly split between white, Asian and black students.

Neither school has struggled with enrollment like many neighborhood high schools on the South and West sides, where enrollment is so low, many question if they’ll eventually be closed.

Karafiol, the Lake View principal, said he sees his school’s diversity as a major selling point. He is white and grew up in Chicago, but he went to high school at Kenwood Academy, a mostly black school in Hyde Park.

“It was not like paradise at Kenwood, but there was a lot of great teaching and it was a great school,” Karafiol said. After graduating, he realized he “was one of the only white students in college who had the experience of being in a minority in high school. That was a really powerful experience for me. And not just the racial diversity, there was the economic diversity, the social diversity, and that was an unbelieveable experience to take with me everywhere I went after that.”

Smolensky said parents worry that if more white, middle-class local students enroll, it could push out or leave less room for low-income students of color from across the city. That’s happened in recent years in many of the North Side elementary schools that boosted enrollment from their surrounding neighborhoods.

Karafiol said he doesn’t see that happening to the high schools any time soon.

“If it comes to that, we’ll talk about that,” he said. “Right now I think we can comfortably accommodate a lot of kids in the neighborhood and still be just as diverse as we are now.”

Lake View staff said the increased interest alone helps bring resources to the school. CPS is spending $20 million to fix the building and outside space.

“I can’t even compare it to 16 years ago – outside groups coming in, parents chaperoning field trips, coming in and painting,” said Kate Sanford-Garcia, a veteran art teacher at the school. “I feel like the neighborhood is starting to take more ownership of the school even if their students don’t go here.”

Supporters of neighborhood high schools across the city hope Lake View and Amundsen can serve as an example for other communities looking to reinvest in their local high schools.

One day soon, they hope, neighborhood schools will shed their image as schools of last resort and will instead become the top choice for local students.

Becky Vevea covers education for WBEZ. Follow her at @WBEZeducation.