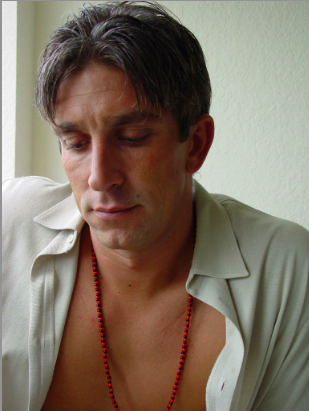 For years, whenever I visited my mom in Miami, she’d casually mention a friend she ran into now and then whom, she said, also had a child who’s a poet. I don’t actually identify much as a poet -- I’m much too in awe of real poets to do more than dip a toe in -- but I didn’t go out of my way to mention this. What I soon realized was that her friend’s offspring and I shared several attributes not often sources of pride in our families, and what she and her friend shared, I think, was a way of being relaxed and happy about their queer Cuban children and their writing -- in both cases, in a language different than theirs.

Several years ago, long after we’d met -- though I don’t remember where we met, exactly, somewhere writerly or Cuban or both -- Richard Blanco and I were at a bar here in Chicago during an AWP event and he said, “You know your mom’s friendis my mom, right?”

So when I heard today’s news -- that this sweet, kind, talented, gorgeous and big-hearted Cuban gay man had been tapped as President Barack Obama’s inaugural poet for his second swearing in -- I had to take a breath and hold my heart.

You’d think at my age, after the moon landing and the first black president and nanotechnology and being a first time mom in my 50s and seeing my own mom light up with joy over her lesbian-mommed grandson, that I couldn’t possibly be swept away with any kind of identity-politics related firsts.

And when my wife first mentioned Richard’s appointment this morning, I was happy and surprised. But as it sunk in -- a Cuban gay man is the inaugural poet! -- I just broke down and cried. My keyboard is drenched as I write. I can't even imagine what our moms must be yakking about, how the giddy they must be, and how amazed -- how utterly amazed they must be because, frankly, I am too.

Change is slow, it’s glacial. And then one day you wake up and you realize you haven’t had to come out to anybody in ages, and when you do, nobody cares. You have in-laws, not “in-laws,” and there’s nothing remarkable about your family structure when you take your son to Spanish Wiggleworms at the Old Town School (and there's Spanish Wiggleworms!). You log in to Facebook and the President of the United States, the most powerful man on earth, has chosen a guy you know -- a fag, a cubiche who likes to joke that he was made in the U.S. with Cuban parts, with whom you codeswitch about Miyami and lechón and our mamis -- to consecrate this moment in history with his -- our -- words.

And you nod and grin through your stupid tears because you know -- you really know -- that damn arch really does bend, it really does indeed point to a shinier day.

If you have want a preview, if you want to hear Richard read from “América,” a poem from his book, City of a Hundred Fires, click here. He will, of course, write something new for the inauguration.