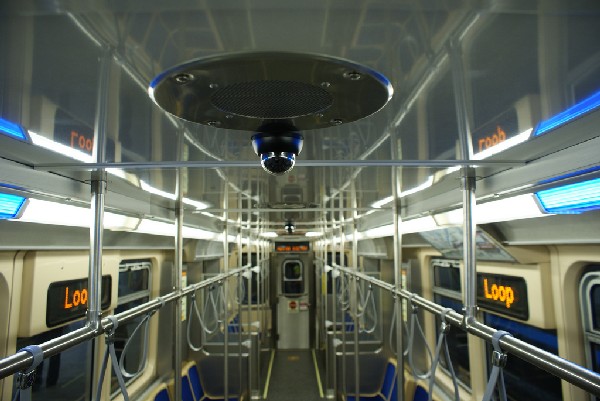 Lead story: Last week I complained that the CTA’s proposed crowd reduction plan isn’t all it's cracked up to be. While the backlash against that plan hasn’t been too bad, the agency is starting to hear complaints about something else: those posh new train cars they just bought. Initial feedback was positive when riders got a peek at them two years ago; but as they’ve been rolled out, mainly on the Pink and Green Lines, riders have already found things to complain about, according to the Tribune’s John Hilkevitch. Those side-by-side seats are pretty darn uncomfortable at times, and apparently, the CTA forgot that America is getting fatter.

As much as I love to complain about the CTA, even I will draw the line at some of the complaints: I’ve ridden on the cars a few times now and they’re pretty damn nice, especially compared to the old, hobo pee-soaked cars; I'm jealous the Brown Line won't get these new cars when the Red Line does. I'm reminded of Louis CK’s classic “everything’s amazing and nobody’s happy” bit, here (even though the cars were recalled for defects that greatly upped the prospect of derailment). The CTA agrees and said the new cars are still coming, despite complaints.

Also: Things are getting weirder at the Drew Peterson trial. Forget the mistrial motions, the judge's lectures to prosecutors and the possibility that the state's best evidence against Peterson is borderline unconstitutional. Jurors dressed all alike yesterday, for the second time during the trial. This time their fashion of choice was sports jerseys. The presiding judge offered a zinger about why no one was wearing a Cubs jersey, but hasn’t otherwise admonished them. Indeed, there’s nothing against the law about what jurors doing. It’s just another weird layer to an already whackadoo case.

And then: History buffs may take advantage of convention season to point out that Tuesday marks the 44th anniversary of the big outbreak of violence between Chicago Police and protesters at the 1968 Democratic National Convention. It’s also another important anniversary, though: the 57th anniversary of Emmett Till's death. The 14-year-old Chicagoan was visiting family in Mississippi when he was beaten to death for allegedly flirting with a white woman. The ensuing outrage helped spur the ongoing Civil Rights movement, especially after Till’s mother insisted on glass-topped casket so mourners could see the boy's fatal wounds. Till made headlines again thanks to the Burr Oak Cemetery scandal: While his body, which was buried at the cemetery, wasn’t disturbed, his original glass-topped casket was found neglected and rusting in storage. It was later cleaned, though, and wound up at the Smithsonian's National Museum of African American History and Culture, scheduled to open in Washington, D.C. in 2015.

RIP: Tomáš Sedláček, a Czech general who fought the Nazis and, later, the Communist regime that overtook the country after World War II. Jailed for life in 1951 for anti-Communist activities, he was freed in 1960 and later exonerated. He was 94.

Finally
What if you really could dig a hole to China, straight through the middle of the Earth? Science explains what would happen. Huzzah, science!