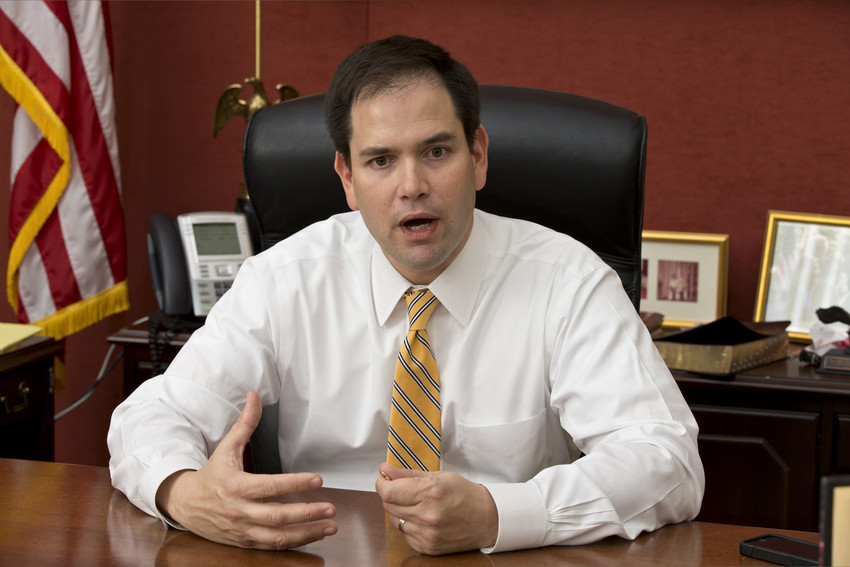 You might have thought that after the AFL-CIO and the U.S. Chamber of Commerce came to an agreement over the weekend on guest workers – historically the trickiest part of immigration reform for unions – that the immigration bill the senatorial Gang of Eight has been working on would find the road a little smoother. Sen. Charles Schumer (D-NY) even went on the Sunday shows this week and crowed about a “substantial” agreement moving forward with both Democratic and Republican support.

Except that the Republican most identified with the bill put the brakes on it. On Saturday, Sen. Marco Rubio (R-FL) fired off a letter to Senate Judiciary Committee chair Patrick Leahy (D-VT) asking him to slow down the possible legislation.

“I am aware that the Judiciary Committee, both under your leadership and under the leadership of your predecessors, has conducted a number of hearings related to immigration reform,” wrote Rubio. “But they cannot be a substitute for fresh hearings to consider specific legislation as part of a national conversation.”

A letter like that from most senators wouldn't make much of a ripple, but because Rubio is the GOP's point man (however reluctantly) on immigration, and because of his national profile, he's not that easy to dismiss. Rubio can kill the bill, and everybody knows that.

Rubio’s dilemma is not actually based on immigration concerns, or even party concerns. While he was busy trying to get the Senate to slow down, fellow senator Lindsey Graham (R-SC) was busy touting the bill on the news shows.

“We haven’t signed off. There are a few details yet,” Graham said. “But conceptually, we have an agreement between business and labor, between ourselves, that has to be drafted. It will be rolled out next week. Yes, I believe it will pass the House because it secures our borders, it controls who gets a job.”

What’s the difference between Rubio and Graham? Besides, of course, that Graham comes from a state much less likely to be open to immigration than Rubio’s Florida, or that Graham is up for re-election in 2014 and Rubio not until 2016? Why, exactly, is the white dude from the South so much more optimistic than the Son of Immigrants?

In a word: cowardice.

In another word: ambition.

Graham isn’t going anywhere but the senate seat for South Carolina, but Rubio’s every move these days is calculated with a shot at the White House.

And here’s Rubio’s dilemma: The country seems to be moving in favor of immigration reform, but the hardcore Tea Partiers – his core constituency, the people who elected him – are still staunchly against anything that smells of a path to citizenship. They're just not too excited about immigration in general, reformed or otherwise.

But that’s not all. The Republican Party desperately needs to attract, or at least neutralize, the Latino vote – the ever growing Latino vote, especially in the South, in places like, say, South Carolina, where the Latino population grew 148 percent in the last ten years compared to about 13 percent for the general population.

That should make Rubio, the senior Latino in the GOP ranks, a Very Important Guy. Rubio, the thinking goes, should be able to talk to his people, explain the goodness of the GOP, and bring them over. He’s good looking, bilingual, and his family has experienced immigration up close and personal.

The problem is that Rubio, not unlike the GOP’s other Latino star, Ted Cruz, has never been on the compassionate side of immigration. He’s not as much of an extremist as Cruz, who uses the term "illegals," and who’d like a bigger fence, more boots on the ground, and absolutely zero chance at citizenship. Truth is, Rubio wants all that, too, except for maybe the path to citizenship, which he's surrendered to.

Sure, Rubio could walk away. But if he wants to run for president in 2016 (which he very clearly does), he needs to show some balls somewhere, sometime, and pass a bill of some sort. (So far, the only senate bill he’s sponsored on his own was a resolution to honor Vaclav Havel. I kid you not.)

But what if Rubio passes the wrong bill? A bill that pisses off the Tea Party, or one that alienates Latinos even more, could mean that even if Rubio gets on the GOP ticket, Latinos may reject him with even greater vitriol for being a traitor than they would some meaningless non-Latino.

Actually, I’m probably getting ahead of myself here. I don’t think Rubio actually gives a crap what other Latinos think of him, just so long as there are enough votes from wherever to keep him in power. And if he has to kill this once in a lifetime chance at immigration reform to keep his sure Tea Party votes in line, then so be it.