As we've pointed out in the past few days, there has been confusion over just how deadly this attack was. Amnesty International has consistently said that the Islamic militants tore through the towns, burning buildings and killing as many as 2,000 people. The government, however, has denied those claims, saying the death toll is closer to 150.

"Up until now, the isolation of the Baga combined with the fact that Boko Haram remains in control of the area has meant that it has been very difficult to verify what happened there," said Daniel Eyre, Amnesty Nigeria researcher said in a statement. "Residents have not been able to return to bury the dead, let alone count their number. But through these satellite images combined with graphic testimonies a picture of what is likely to be Boko Haram's deadliest attack ever is becoming clearer."

Here are two relevant photographs from the town of Doron Baga. The first was taken on January 2. The red represents healthy vegetation: 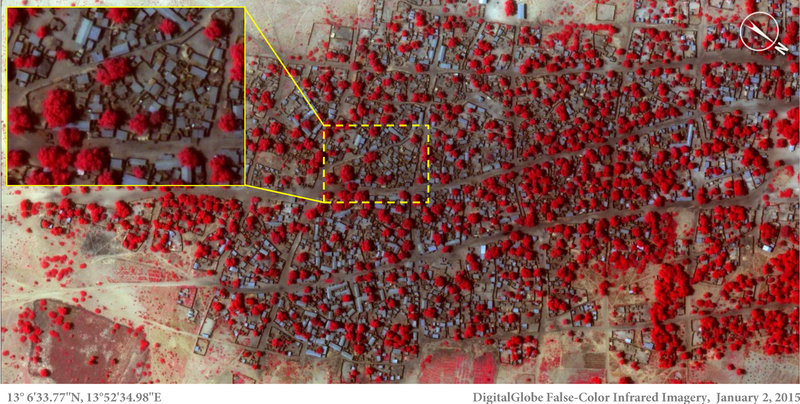 The second image was taken January 7: 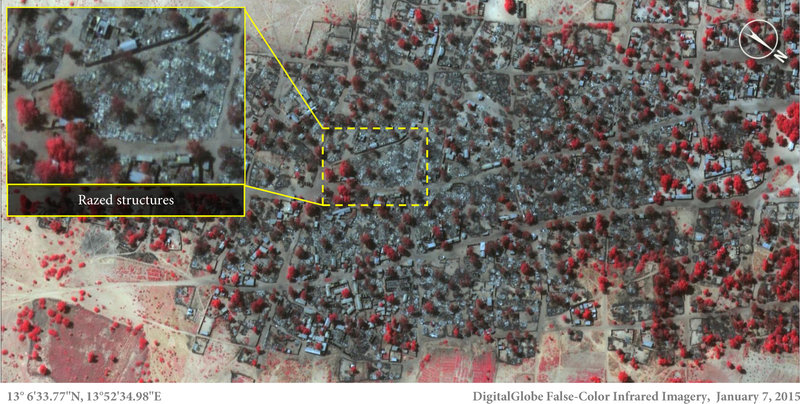 According to Amnesty, those pictures show that more than 3,100 structures were damaged or destroyed by fire, "affecting most of the 4 square kilometer town."

"In August, Boko Haram leader Abubakar Shekau announced the establishment of his 'Islamic Caliphate,' quickly taking over every corner of Borno State in northeast Nigeria. But one town called Baga, populated by thousands of Nigerians along the western shores of Lake Chad, held out. Anchored by a multinational military base manned by troops from Niger to Chad, it was the last place in Borno under the national government's control. Over the weekend, that changed."

Boko Haram has been in the news lately, because the Islamic extremists took responsibility for the mass kidnapping of schoolgirls from the town of Chibok in Borno last April.