O’Toole Elementary School sits on a quiet, sun-drenched block in Englewood on the first day of Chicago's teachers strike. Little tufts of grass poke through the concrete lots on which cars and kids are usually found. On the drive up Seely Avenue, maybe one-third of the houses are boarded up. In one abandoned apartment building a couple of blocks away, the boards are torn from the windows, the lock on a door is gone. A can of Coke rests on a window sill. 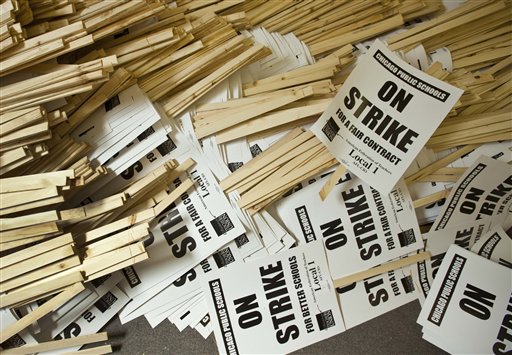 More than 400 kids go to O’Toole, almost all of them black, almost all of them low-income; about ten percent are special education students. O'Toole is a neighborhood Math & Science Initiative School but it’s also on probation. For all the lead-up to Mayor Rahm Emanuel’s new recess initiative, O’Toole is woefully and clearly unprepared.

The playground equipment was removed by a former principal, explains another teacher, because neighborhood men would gather on it at night and drink.

“Now they just sit and drink on the concrete,” she said.

Had the kids come back to school on time, they would have spent their recess under the watchful eye of school staff milling around outside.

And this spare scene — the empty school, the bare ungated yard, the red-eyed neighborhood man warily watching the teachers and sipping from a bottle in a bag at 10:30 in the morning — is the great disconnect between downtown, where the policies are dreamed up, and down on the ground, where they have to be implemented.

Something, you know, as simple as recess.