One morning in March, Sheila and Stephen Grayson walked out the door of their Englewood home to find a bulldozer alongside a bit of pomp and circumstance.

A group of Chicago city officials — including now-Chicago Police Superintendent Eddie Johnson — were just down the block. And out came an official City of Chicago podium with microphones jutting out the top.

The couple had no idea what was about to happen.

“Not until that day”, Sheila Grayson said. “Everyone was coming out, wondering what was going on.”

It was for an event kicking off the latest city initiative to tear down vacant buildings in high-crime police districts.

The Graysons and other residents who had gathered to to watch the festivities were ushered behind the city officials as the press took photos and video.

“When buildings are left vacant, they are used by gangs as gathering places and for illegal activity,” Johnson said. “The demolition of these buildings are part of our overall efforts to keep our residents safe, protect our community, and invest in the future of our neighborhoods.” 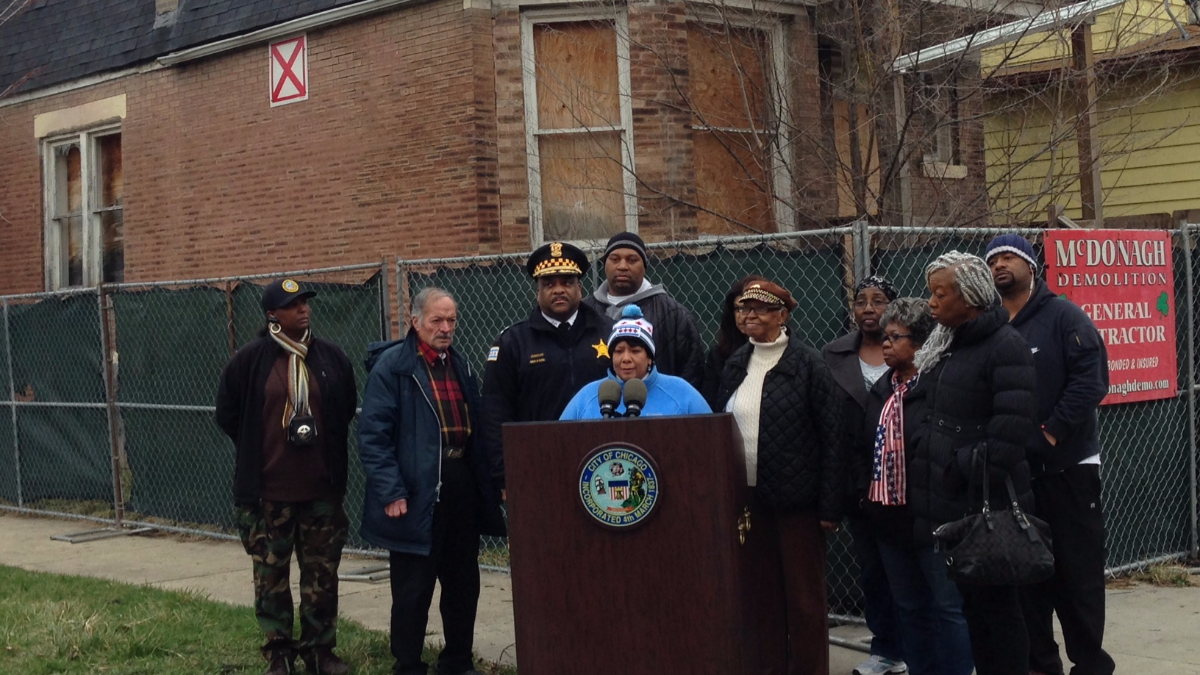 Like many residents in the area, the couple was glad to see the city tear the building down. While they’re not sure it will deter crime, they’re happy to see the city do anything.

“Every person has a different opinion, but it feels cleaner,” said Sheila Grayson, a few weeks after the tear-down. “We’ll see how many people drop trash in there, but so far they’re keeping it clean.”

Just a few months later, the city announced its 100th demolition under the program.

But if you look back to 2008, the earliest the city tracks its own demolitions, this is just the latest in a long line of initiatives aimed at removing vacant buildings.

Since 2008, the city tore down more than 3,100 buildings — the equivalent, on average, of more than a building a day. The majority of those demolitions happen in some areas on the South and West Sides.

Despite the city being the biggest player in rehabbing these areas, it’s often unclear what will come next.

Where a city demolition happens

In North Side neighborhoods, with stronger housing markets, buildings are usually torn down by private developers with new construction lined up.

In some neighborhoods on the South and West sides, demolitions still happen. They’re just done by the city, and often without another project waiting for the vacant lot. 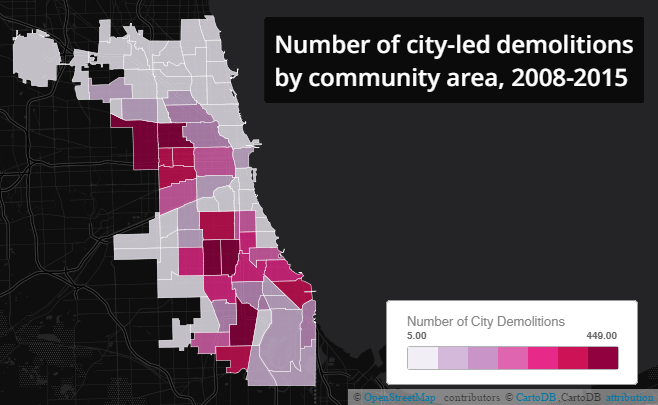 Still curious about Chicago Building patterns? See an interactive look at Chicago's building trends over the past decade.

The city is involved in more constructive efforts when it comes to troublesome buildings, but it’s nothing on the scale of its demolition activity. It’s started a handful of programs to rehab some of those properties, including leasing or transferring land to the Chicago Park District. It also started the Large Lots program, which sells property to residents for $1.

The city also operates a Troubled Building Initiative and a number of other programs to intervene with buildings before they’re demolished.

There’s also a forfeiture program Commissioner Frydland started while with the city Law Department, in which the city petitions Cook County Circuit Court to allow a third party to buy a vacant building. Around 60 properties have gone through that process, which involves buyers paying delinquent property taxes and agreeing to either rehab the property or demolish it.

Despite these efforts, the city currently owns around 15,000 vacant lots.

“Say, for example, if on one block where there are several vacant buildings that have been taken over by gangs, maybe that block we would target, but not the neighborhood,” she said.

Frydland said these are the principal reasons the city wrecks a vacant building:

Recently, most city demolitions are carried out for crime prevention, including multiple events this year like the one the Graysons participated in.

Beyond fighting crime, the city hopes demolitions can make a neighborhood more appealing for reinvestment.

“I pick up people from the Midway airport on a regular basis that want to invest in the community,” Fulton said. “When they drive down the street and they see all of these boarded up houses, boarded up buildings, they get kind of a negative effect.”

Fulton hopes removing the worst properties will help change perceptions of Englewood and bring new residents and businesses. He points to projects like the Whole Foods store being built across from his office.

“Forty years. It took time for that to come to fruition. So the housing strategy is something that will happen,” he said. “It’s just going to take time.” 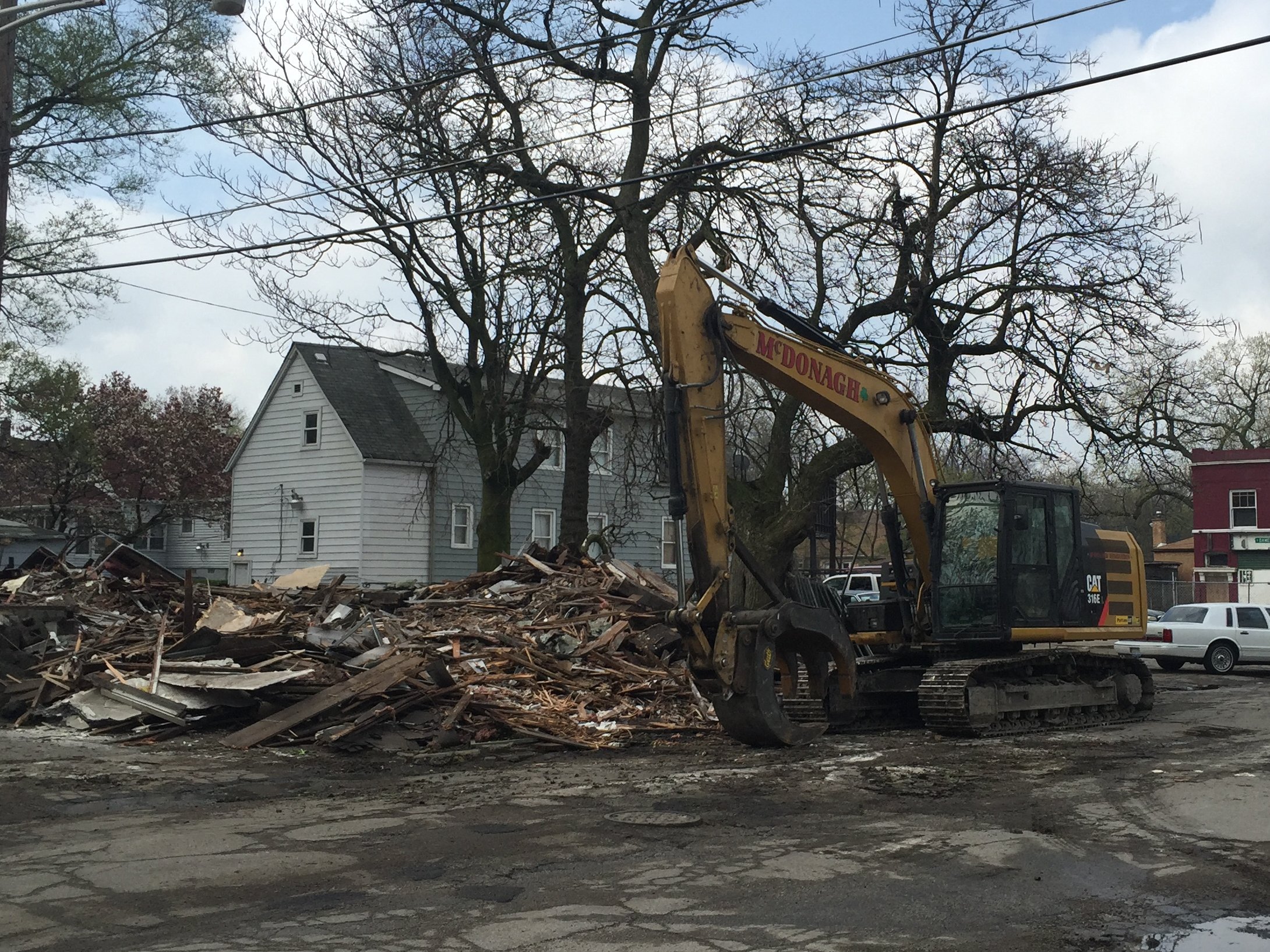 Asiaha Butler, President of the Residents Association of Greater Englewood, isn’t as sure. She’s seen a half dozen homes come down on her block.

“It feels isolated when you have no possibility of a neighbor or someone moving in,” Butler said. “Now it’s just these vacant places.”

She’s skeptical that current residents will be the ones who see what replaces the vacant lots created by the city in Englewood.

“We know some of this housing stock should be torn down, ones that are burnt out, have been vandalized,” Butler said. “But hitting a neighborhood like Englewood, it’s more people thinking the neighborhood is being cleaned out and people who are here may not be the people reaping those benefits.”

Frydland said that’s definitely not the case, that there is no overall plan to target specific areas. Broadly speaking, the city doesn’t plan when it comes to the vast majority of its demolitions at all — the thousands the city’s racked up since 2008 are prioritized by specific requests from residents, aldermen, police and other stakeholders to remove a single building.

“I think the way we’re handling it is just right,” Frydland said. “We’re responding to neighborhoods, CPD, by doing this prioritization we’re allowing buildings that aren’t causing as much blight to get saved.”

Some urban planners argue, though, that city-led demolition can and should be coordinated and not just for the sake of possible future development.

Alan Mallach, a senior fellow with the center for community progress and author of Bringing Buildings Back, has studied the effect of vacant buildings and attempts to address it.

He said research shows vacant buildings do have more problems than vacant lots, from increased crime to reduced property values, often making it a good idea in many cases to remove them.

“A lot of times a city which is not growing very fast or has very low value areas like Chicago does is faced with a very difficult choice,” Mallach said. “You can let the property sit there and continue to do harm to the neighbors and their quality of life or you knock it down.”

While he said no city has demolition nailed, he likes the way Baltimore in particular plans for vacant lots, setting aside part of the cost for every demolition to the city greening program. Philadelphia runs a program with the Pennsylvania Horticulture Society to beautify vacant lots.

He argues that in cities like Chicago, planners need to start looking at where vacant lots should be converted to other long-term uses.

“I sometimes find myself in really heated arguments with some local officials who simply don't want to think about this,” Mallach said.

Chris Hagan is web producer with WBEZ. Follow him @chrishagan.