On Friday, while perusing Facebook, I saw that my friend Bex Schwartz had posted this photo from her childhood with the caption “This photo from when I was three explains a lot:”

Something about that photo rang a bell for me. It wasn’t the bangs or the couch or the baby brother (although those were recognizable to me, too). It was those Underoos. Was it possible that I wore the same underpants as did a friend of mine (whom I’ve never met in person) and who lives 800 miles away? I did a little search through my parents’ slides on Flickr and realized that I too was rocking Wonder Woman Underoos in my youth: 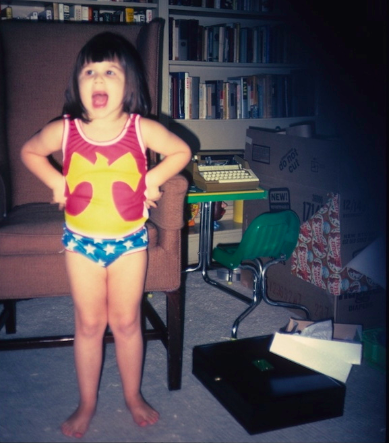 I’d all but forgotten about those Underoos. What a funny coincidence. Was it possible that Bex and I were just sisters from another mister, or were there more of us secret Wonder Women from across the country? We put out a call on Facebook and Twitter and quickly found that we were not alone:

Thanks to Carrie, Deb, Jen and Stacey, Nellie and Rusty for those pics.

Obviously, something about those superheroine-themed underpants must have been meaningful to all of us girls, or else we wouldn’t have posed for photos in them. Look at how proud we all are, as we should have been, because we were incredibly awesome. Little did our parents know when buying us those red, blue and gold undergarments that they were raising a secret generation of incognito superhero girls. (Or maybe they did!) I had all but forgotten that I was once Wonder Woman. But now I’m glad that I was, and that I was not alone.

We want to find more of you out there. Bex and I have started a Tumblr called Small Wonderoos collecting these old photos. If you are a member of the sisterhood, please check us out and submit your own. And think about how wonderful we all are.