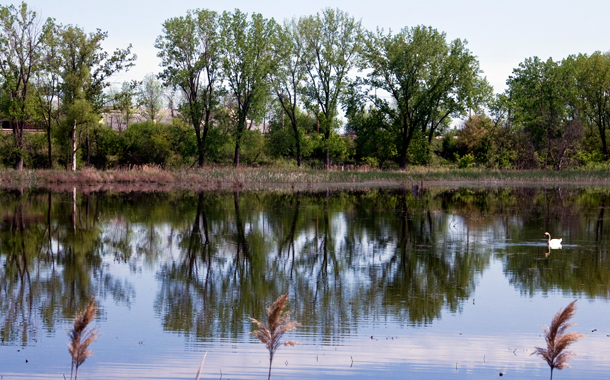 Although Chicago was built from a swamp, wetlands remain only in the city's most remote corners. Hegewisch Marsh is a prime example of a hemi-marsh, a mix of open water and stands of vegetation.

“A lot of the Calumet area used to be hemi-marshes, and there’s not much of that habitat left,” said Zhanna Yermakov, natural areas manager for the Chicago Park District, which acquired the 100-acre site from the Department of Environment when the city dissolved that department in 2011.

The Park District also found itself in control of a solar-powered pump that can draw water from the Little Calumet River to replenish a parched marsh during droughts. Though it was installed in 2008, the pump hadn’t been turned on until this year. Now it could be part of a five-year restoration plan for this rare bird breeding ground. 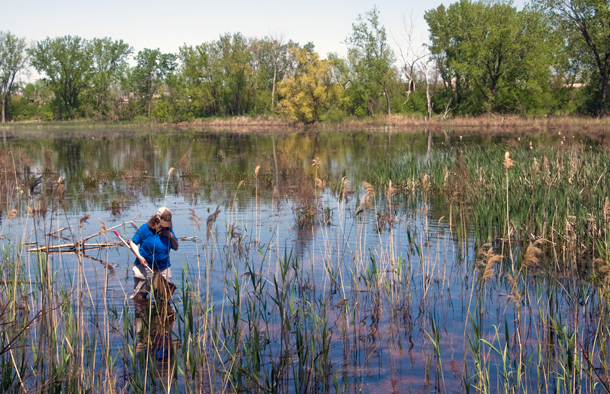 The ebb and flow of marsh water gives life to a unique ecosystem favored by migratory birds. During the late 1980s, a suite of rare birds — yellowheaded blackbirds, black terns, common gallinules and others — frequented northeastern Illinois marshes. Since then there have generally been declines in those species, while others that prefer open water or shallow wetlands, like pied-billed grebes and sandhill cranes, have increased.

Arriving on the sodden edge of the 29-acre marsh itself, U.S. Fish & Wildlife Service Biologist Mike Redmer is visibly impressed.

“The last time I saw the marsh with this much water was probably 1999,” he said.

Redmer is leading a small group through the wetland in search of frogs for Urban Biodiversity Week. They turn up empty-handed but for some tadpoles and a hatchling painted turtle, no bigger than a half-dollar when it retracts its limbs into its shell.

The pumps appear to have worked, but Yermakov cautions it’s hard to know how much of the water is runoff.

“We weren’t even sure the pumps were going to be operational,” she said.

And fine-tuning a natural area is no easy task.

“Figuring out how to manage the system is not simple," Yerkakov said. "These sites don’t come with owner’s manuals.”

Several frog species were once abundant in Hegewisch Marsh. While they remain, all have become more difficult to find. Invasive species have ravaged habitat once home to uncommon amphibian species like wood frogs and spotted salamanders. One prevalent invader, buckthorn, even cripples developing frogs with a chemical it uses to set the table for its advance.

As with many urban natural areas, Hegewisch Marsh also has its issues with off-road vehicles and dirt bikes. Deep cuts from what look like either trucks or years of ATV traffic scar the marsh with bare beds in spots. But ongoing restoration efforts have used federal dollars to convert the treaded ruts into corridors for amphibian habitat.

Yellowheaded blackbirds and spotted salamanders may make for rare sightings in Hegewisch Marsh these days, but the urban wetland is still a refuge for threatened species, thanks to ongoing management. Time will tell if the Park District’s restoration plan — an effort of the Army Corps of Engineers, the state Department of Natural Resources, and the Chicago-based nonprofit Wetlands Initiative — will strike the right balance. But if last week’s dewy hemi-marsh is any indication, the new pump may be a valuable tool in their fight.