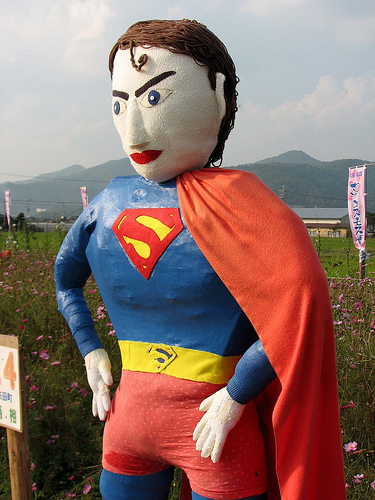 Superman is boring. What’s interesting about a guy who can do everything? Why don’t you just make a movie about God or something, only one that isn’t made by Mel Gibson or features God doing shenanigans like making newscasters talk funny. But seriously, a guy who can do everything is boring, especially if he always could do everything and it’s nothing new. If you just want a movie with a handsome guy in tight underwear, that’s fine, but have him be someone other than Superman.

And he’s from outer space? Ugh. Nothing (and I mean nothing—particularly no good movies) ever came from outer space. Do you know why the movie Inner Space was so good? Because it looked inward, not out into boring old space.

Perhaps you had to be there.

His outfit will never be cool, no matter how many textures they put on it.

How much money does Superman make? Because Bruce Wayne, when he’s not being Batman, is a rich playboy. Which is pretty cool.

At least Batman has the decency to cover half of his face to hide his true identity. People just seem dumb in Superman movies, not being able to figure out something so obvious.

Also, why does Superman need to wear an “S” on his chest? So people don’t forget who the immortal man who flies around their city is? Is there a danger with confusing him with someone else?

I also find the legend of how his outfit got made problematic. Who made it for him? Who is his tailor? Or did he make it himself, thereby giving himself the name and making a monogrammed outfit? Even I know his parents did not name him “Superman” at birth. Again: problems.

If Superman is so great, why can’t Clark Kent do something to save the dying newspaper industry?

In case you couldn’t tell, I like Batman more than I like Superman. I don’t consider Robin to be a real superhero, even when played by Joseph Gordon-Levitt. Spider-Man is just a kid. All the other superheroes are tedious at this point because they have had too many movies made about them or their movies were unnecessary to begin with. Don’t even get me started on whatever happened to Jean Grey in the third X-Men movie.

“Super” is a lame adjective. Would you trust someone who used the phrase “Super!” to describe any aspect of his or her life?

None of these points is arguable as they are all based in fact. If you enjoyed this piece, then you probably loved the Batman review I ran a few years ago. If not, don’t worry, I’m sure I will win you over at a future date.