The domination of the Scripps National Spelling Bee by Indian-Americans has gone on long enough that a second generation has emerged.

Last year, Mira Dedhia, whose mother competed in the bee three times, finished third. This year, the first child of a former champion is competing.

Dr. Balu Natarajan, a physician from Hinsdale, Illinois, won in 1985 by spelling "milieu," a word that almost certainly wouldn't be used beyond preliminary rounds today. His 12-year-old son, Atman Balakrishnan, is making his debut this year, and his ultimate goal is to equal his father's achievement.

"He does help me and try to make me work harder, because he knows that I want this," Atman said. "If he knew that I did not want this, he would not push me."

The bee began Tuesday with 516 spellers, by far the most in its history. The expanded field means three full days of spelling instead of two. The 50 or so spellers who make the finals will be announced Wednesday, then compete Thursday until a champion is crowned. As usual, most of the presumed favorites are Indian-American.

Natarajan was the first Indian-American to win. Another followed in 1988. Eighteen of the past 22 champions have been Indian-American, including three years when there were co-champions.

Natarajan is on the board of the North South Foundation, a nonprofit that hosts national competitions in spelling and other subjects and has served as a training ground for nearly all the recent champions. That's just one reason among many for the success of Indian-Americans.

"It's become now kind of a good cycle where certain Indian-Americans succeed, and I think they've inspired others to do the same," Natarajan said. "I have no idea what my part is in that, if any."

This year's bee has 516 spellers, roughly a fourfold increase over Natarajan's first bee. That's not the only thing that has changed.

"The word bank of most of the spellers or many of the spellers has just gone up dramatically," he said. "I think you could win the spelling bee back then by knowing maybe 10,000 words, and now the kids who win have to know somewhere between 40-and-80,000 words."

Here are some other things to know about Tuesday's first day of spelling: 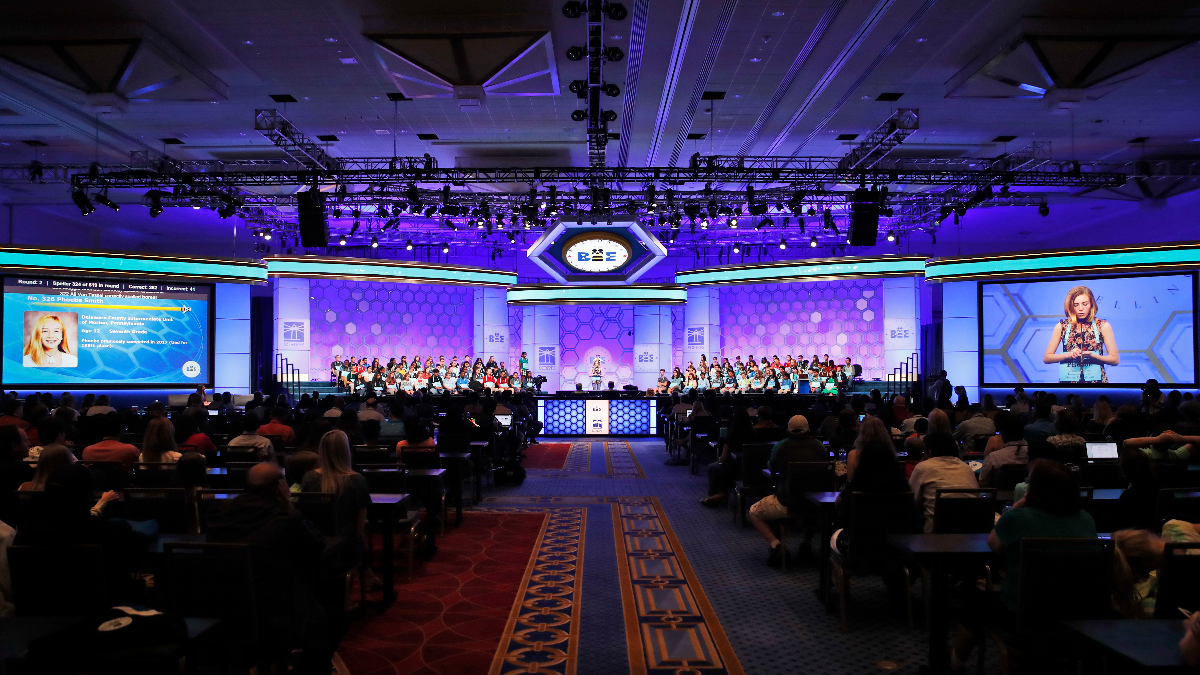 The bee begins with a written spelling and vocabulary test. It's the biggest factor in determining the roughly 50 spellers who will advance to Thursday's finals, and the consensus was that it was very difficult.

The field of spellers expanded by more than 200 this year because Scripps started a wild-card program to give opportunities to more kids from highly competitive regions. As a result, Scripps had to craft a test that would separate the most skilled and prepared spellers.

"They made it hard on purpose," said Jacob Williamson, a former speller and a student at Georgetown University who is coaching five spellers this year.

The moments after the test are among the most nerve-wracking for spellers, who spill out into the halls outside the bee stage and frantically Google the answers.

"The vocab was kinda hard this year," said 11-year-old Ashrita Gandhari, who made last year's finals. "It was definitely harder than last year."

Even some of the most accomplished spellers said they missed a few of the vocabulary words, but they were still reasonably confident they'd get through to the finals.

"It was fine, actually. I didn't expect it to be fine," said 13-year-old Erin Howard of Huntsville, Alabama, who finished seventh last year. "I think at worst I missed five."

Longtime bee pronouncer Jacques Bailly, revered by spellers for his gentle manner and meticulous accuracy, had a rare slip-up.

Thirteen-year-old Tara Singh of Louisville, Kentucky, got "Diplodocus" — a massive, herbivorous dinosaur — and when she asked Bailly for the language of origin, he said, "dioecious is made up of Greek elements," using the word that the previous speller had missed.

Spellers know what questions they can ask Bailly and expect to get useful information in response. That doesn't stop some from trying to get more.

"Can you, like, repeat it slowly?" asked Annie Huang of Surrey, British Columbia, Canada, when she got "menehune," a Hawaiian-derived word for mythological, forest-dwelling dwarves.

"Is there, like, a root word or something?" she asked, only to be reminded that spellers have to ask for a specific root and define it to receive that information.

Annie gave it one more shot before she misspelled the word.

"That depends on your intuition," Bailly replied.