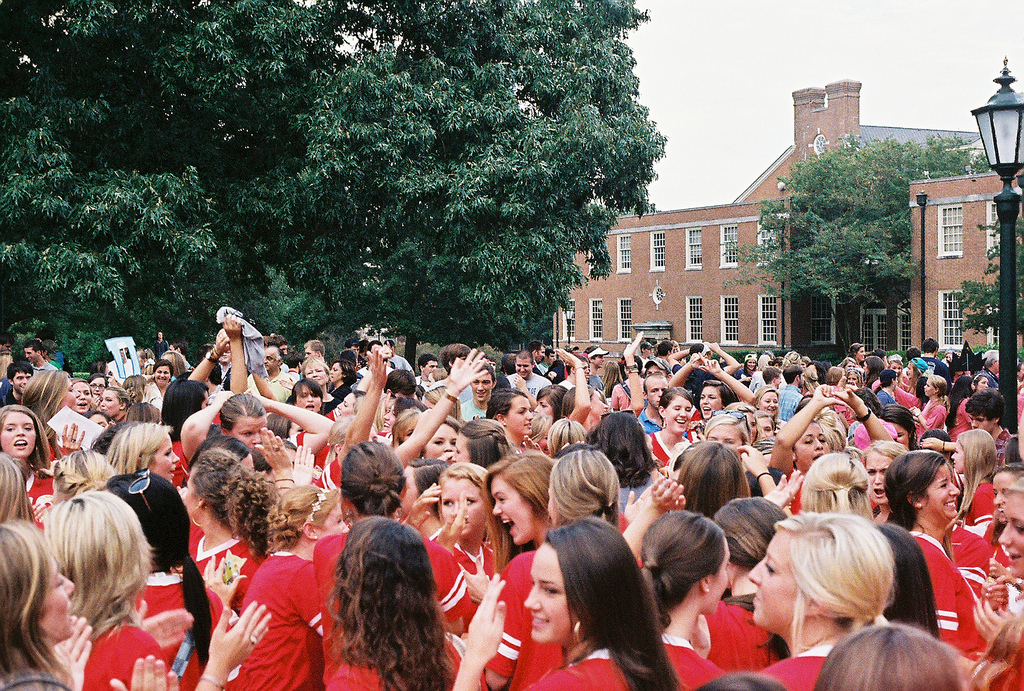 Last week, the University of Alabama's student newspaper The Crimson White published a lightning rod of an exposé on racial discrimination during sorority rush. The allegations—that two black women were rejected from four traditionally white sororities this rush season because of pressure from racist alumnae—were based on the account of Melanie Gotz, a member of Alpha Gamma Delta, and several other UA sorority members who wished to remain anonymous.
This news does not surprise me. First of all, Birmingham, Ala. is the site of one of the most heinous hate crimes ever committed. On September 15, 1963, a group of white supremicists bombed 16th Street Baptist Church, injuring two dozen black churchgoers and killing four little girls: Addie Mae Collins, Cynthia Wesley, Carole Robertson and Denise McNair. This year marks the 50th anniversary of their deaths.
Many of the white alumnae urging sorority members not to pledge black women in 2013 may be old enough to remember this tragedy, or perhaps their parents witnessed it firsthand. Most likely, these women came of age in a place and time when violent racism was not only out in the open, but also publicly encouraged.
I was raised in the South and saw institutional racism almost everywhere I turned; although sadly, I didn't see it for what it was at the time. I joined a prestigious (read: overwhelmingly white) Southern sorority, as did my mother and older sister before me. The university that I attended for two years was not what one might call a shining bastion of racial diversity. My youngest sister rushed at the University of Alabama this fall, and was selected by one of the sororities at the heart of the current controversy, Alpha Gamma Delta.
I know how rush works. The pressure from alumni is intense. I know that most white women who enter into sorority rush, often at the behest of their female relatives, are either blissfully unaware that their "sisters" look just like them, or prefer (secretly or overtly) to keep it that way.
Still, I believe that in the vast majority of cases, it is the sorority system, not the sorority members themselves, perpetuating the age-old practices of elitism, segregation and thinly-veiled prejudice. Tradition is worshipped in sorority life, upheld as holy doctrine by the alumnae determined to keep their sisterhoods frozen in time.  However, the new pledges are the ones to raise their hands and ask why. After all, when a perfectly qualified candidate is rejected for no other reason than the color of her skin, what does standing by "tradition" really mean?
My sister, raised in a city by an open-minded family, goes to parties in Birmingham and is shocked to hear students casually spewing racial epithets. She and her more progressive friends leave.
Members of Alpha Gamma Delta and several other sororities on the UA campus have spoken out against their Panhellenic legacy of systemic racism, and I commend them for doing so. Still, the system needs to change from the inside out, with the younger generations leading the way to bridge the divides.
Anyone who followed the Trayvon Martin trial or saw the hate roll in on Twitter for the new, non-white Miss America knows that we don't live in a post-racial world. Not yet. But as long we continue to speak out against injustice, much like sororities all over the country are beginning to do in the wake of this report, then bigotry won't win.
Leah Pickett is a pop culture writer and co-host of WBEZ's Changing Channels, a podcast about the future of television. Follow Leah on Facebook, Twitter and Tumblr.