Millions of birds have been soaring over Chicago on their annual spring migration from Central and South America to Canada. And every migration season, thousands of them collide with the city’s skyscrapers, injuring or killing themselves on their long journey.

The all-volunteer group Chicago Bird Collision Monitors collects injured and dead birds every spring and fall migration — March 15 to June 15, and August 15 to November 15, respectively. In recent days, as the spring migration has been peaking, volunteers have been coming to downtown Chicago at 5 a.m. seven days a week to search streets and sidewalks for dead or injured birds.

The group collects about 5,000 birds each year, said Annette Prince, director of Chicago Bird Collision Monitors. About 2,000 of them are injured and are taken to Willowbrook Wildlife Center, where more than half of them recover and are released the same day. The dead remaining birds are given to the Field Museum for research.

Prince said that toll from bird-and-building collisions only represents what volunteers find. She said many more birds are never discovered because they’re in out-of-reach spaces such as awnings.

Prince said the nighttime lights and glass of Chicago’s skyscrapers are huge problems for birds, in addition to the predators and bad weather they face as they migrate along what’s known as the Mississippi Flyway.

“This used to be a safe path for them to travel … and then kind of in a blink of their evolutionary eye, we’ve erected tall buildings with glass and lights,” Prince said.

From warblers to thrashers, cat birds to tanagers, more than 200 species join the migrations through Chicago’s skies.

It isn’t fully understood why, but, like insects, birds are drawn to bright lights. Some birds circle around light until they ultimately collide with its source or drop from exhaustion. 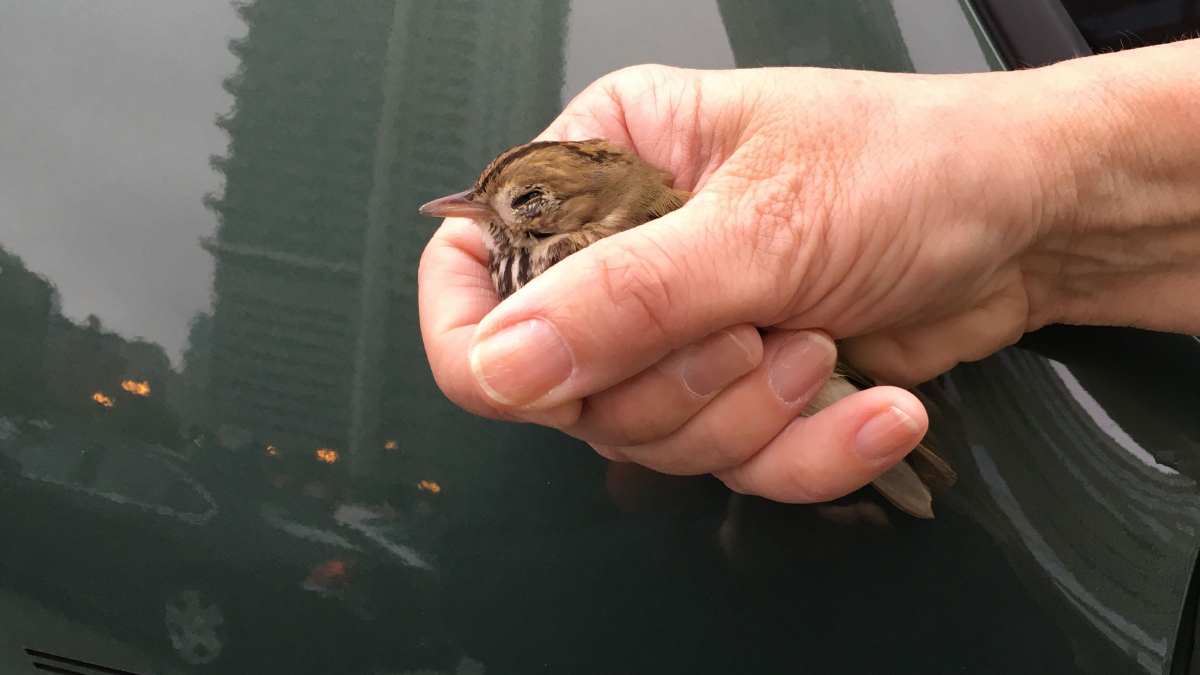 Currently, about 90 downtown buildings participate in Lights Out Chicago, a voluntary program that involves switching off their topmost lights from 11 p.m. to sunrise during spring and fall migrations. Despite the program, Chicago still produces so much bright light that it tops the Cornell Lab of Ornithology’s list of most dangerous U.S. cities for migratory birds.

Another challenge for birds is their difficulty recognizing glass and avoiding flying into it.

“They just don’t understand,” Prince said. “Certainly the more glass a building has in it, the greater the odds ... that a bird strike can occur there."

She said buildings with exteriors that combine glass with other materials, such as Marina City on the Chicago River and Aqua, an 82-story tower in Streeterville, can help reduce bird collisions. But many Chicago skyscrapers aren’t built that way.

That’s why Prince’s group is backing the Bird Friendly Design ordinance, introduced to the Chicago City Council in January by Ald. Brian Hopkins, 2nd Ward. The proposed ordinance would require buildings to join the Lights Out program, and would require future buildings to incorporate bird-safe design elements, including frosting or decorating the glass.

“We, by virtue of where we live, are obligated to be good stewards of our position on the Mississippi Flyway. And that means our buildings have to take this into consideration,” Hopkins said.

The ordinance will go to the Committee on Zoning, Landmarks, and Building Standards.

Meantime, volunteers will continue their early-morning bird recovery efforts through June, when the spring migration ends.

Throughout the year, they take hotline calls (773-988-1867) from people reporting dead and injured birds.

After the spring migration, the monitors will be out in full force again during the fall migration when birds will fly south with their young.

Correction: A photo caption in this story has been revised to give the correct spelling of the last name of Liz Challoner.