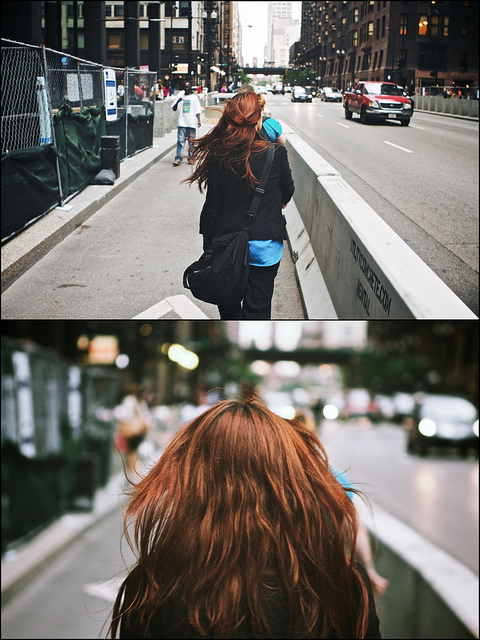 Harassment shows its ugly face in many forms: a bully at school, an abuser at home, an underminer in the workplace, or an army of trolls online.

However, perhaps no form of harassment is more overt or troublingly common than catcalling: the whistles and kiss noises, the staccato beeps of car horns, the whispered or shouted evaluations of someone's physical appearance on the sidewalk, and the many other forms of street harassment (stalking, groping, leering, etc.) that women continually receive in public spaces, often on a daily basis.

I have experienced public objectification—whether it be whistle and a wink, a double tap of a car horn, or an unwelcome comment on my body that sends a tiny shiver down my spine—every single time that I go out walking in Chicago.
It doesn't matter which neighborhood I'm in, whether I have makeup on or not, if I'm wearing a miniskirt or a baggy sweatshirt and jeans.
Without fail, a complete stranger (usually a man or group of men, although women in their company have occasionally joined in) will take the time out of their day to put me in my place as a woman magnified through the lens of rape culture: a female specimen to be ogled, disrespected, and dehumanized as nothing but an object of their gaze.
Most of the time, I ignore them and keep walking; because isn't that what you're supposed to do? Other instances break the straw holding together an already fragile day, and I want to hide or scream or cry. I want to yell back that my body is not theirs to claim, that I'm more than just a piece of meat to be verbally chewed and torn apart for sport.
My look is more skinny nerdgirl than glamazon; but even if I did choose to wear high heels and skintight dresses every day, I still wouldn't deserve the "Hey, sexy" and "Mmm, lookin' good" whispers, smacking of lips, and anonymous shouts from rolled-down windows, often followed by nervous laughter from passersby.

I am not alone in this. When I reached out to others on Twitter, asking if they would be willing to share their stories of street harassment, they responded with tweets of "too many stories!" and "I feel like every woman in a city like Chicago has more than one experience to share."

One particularly frightening story that I received via email, from a woman in Chicago named Hannah, confirmed this for me. With her permission, snippets of one of Hannah's most harrowing experiences—in which a man harassed her outside of a bar in Wrigleyville, then followed her to a friend's apartment—are reposted with ellipses below:

"It wasn't the first time someone had shouted at me from a bar by any means, probably not even the first time that week, so I ignored it like I usually did. But he didn't go away. He kept following me, saying things like 'Come on, don’t be like that,' and walking faster so he was next to me... I kept shrugging him off, and saying I couldn’t join him for drinks because I was meeting a friend. I’d smile, and try to be apologetic about it, but he wouldn’t stop asking, and getting more agitated ... Finally, I got to my friend's building and went into the little vestibule ... that’s when he started screaming at me. Calling me a bitch for lying that I was meeting someone. Saying there was no one waiting for me upstairs, that I was just a lying whore who didn’t know how to have fun.

It was one of the scariest moments of my life, fumbling with the keys ... I tried to think about what I’d do if he did try to get closer to me–at this point, he was still standing inside the doorway to the foyer, not entirely off the street–but thankfully, the key slid into the lock and I was inside the stairwell, slamming the door behind me ... Once I got upstairs and related the story to my friend, all I kept thinking was that all down the four blocks, people were watching him follow me, and NO ONE said anything."

Do we have to stand by and take this kind of harassment from strangers, watch it happen to others without saying a word, or "just ignore it" like many of us have often been told? The answer is no; you shouldn't have to shut up and take it. You deserve to walk down the street without being harassed by strangers. You deserve to stand your ground, and it's okay to ask for help.

Renee Davidson, Communications Director of the grassroots group Collective Action for Safe Spaces (CASS), says that she has received over 600 stories of street harassment in the D.C. metropolitan area.

"Our submissions are overwhelming from women, but men -- particularly LGBT and gender nonconforming men -- experience street harassment as well," says Davidson, " Women and men can take a stand against this by speaking up when they’re harassed, whether that means responding to the harasser, sharing their story with a group like CASS or Hollaback, or starting a conversation about street harassment with their friends and the men in their lives."

"Street harassment is also intensely normalized, such that being told to 'brush it off' has caused many women to accept it as just another part of moving in public. By speaking up about our experiences with street harassment, we are letting it be known that it's a problem."

Yes, men also face sexual harassment from strangers on street corners, and their experiences matter just as much. But when stories of male-on-female aggression pop up again and again, like this piece from the Huffington Post about a man running over a 14-year-old girl for refusing to have sex with him, it's time to dig deeper into what's perpetuating this chronic narrative. And then we should actually do something about it.

Just as we should be educating men to not rape (instead of simply teaching women how to avoid rapey situations), we should also teach boys from a very young age that catcalling is degrading, hurtful, and harmful to the fabric of our society. Street harassment fuels rape culture, "blurring lines" to the point that many women can no longer tell the difference between a compliment and objectification. Leering at women on the street and hollering pointed comments about their bodies is the furthest thing from respectable behavior; it's blatant misogyny and patriarchy incarnate.

"Learning tips on bystander intervention is also a great way to help prevent sexual harassment," adds Davidson, "If you encounter someone street harassing another person, you can tell them to 'respect women' or any other interjection that feels natural for you."

We don't have to keep our mouths shut. We don't have to grin and bear it. No one deserves to be harassed on the way to the grocery store or while walking home at night, and it's time for us to start talking back.

Resources for education, inspiration and support: StopStreetHarassment.org, CollectiveActionDC.org, Catcalled.org, this Atlantic article on a new app to help women and members of the LGBTQ community report street harassment, the "Stop Telling Woman to Smile" project, and HollabackChicago!, an anti-harassment forum for Chicagoans.

If you have a street harassment story to share, please sound off in the comment section below. Let's start talking.

Leah Pickett writes about popular culture for WBEZ. You can find her on Facebook, Twitter and Tumblr.