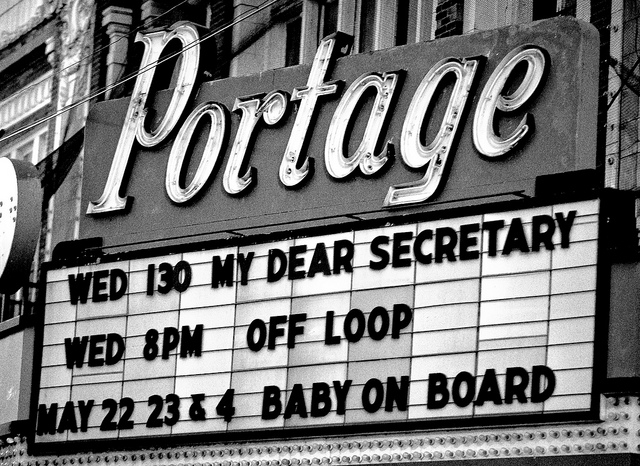 On Thursday, Alderman John Arena announced that the Landmark Commission had voted unanimously to allow preliminary landmark status to the Portage Theater. This was a blow for the Chicago Tabernacle, an Albany Park ministry that had plans to turn the Theater into a church. The Theater could still be sold, but the historic nature of its designs would potentially be protected.

Speaking at The Paper Machete last week, Chicagoist's Steven Pate explains the value of the Portage, which he said had "become a kind-of movie nerd's paradise."

"We grow and we change but preserving continuity with our heritage strengthens our diversity and improves the likelihood of a richer future," he elaborated. "We resist the proposed transformation of the Portage into a church, because it is already a church." Read an excerpt or listen:

You're probably busy. It's probably a packed schedule right now, what with all the demands of being the coolest 70 year old on the planet. Maybe you're doing Tai Chi with Metallica, or curating some European electronic festival that we won't even know exists for several years but maybe you could explain what you meant by this line from your song 'Perfect Day':

Just wondering: have you been to a movie theater in the past 40 years? If so, would you like to revise that agenda? A popcorn and two Cokes will cost you more than a Metal Machine LP in very good plus-plus condition on eBay. You will endure a torturous info-tainment regimine, wherein Channing Tatum wll talk about what GI Joe means to him, and Sprite will convey to you access codes for downloading behind the scenes footage from a 3D Justin Bieber movie. Someone in the seat next to you will be playing Tiny Tower on their iPhone during the movie. Or, let's be real, telling everyone and Facebook that they're sitting next to you?

Is this really an essential component of your perfect day? If not, is it the drugs talking?"