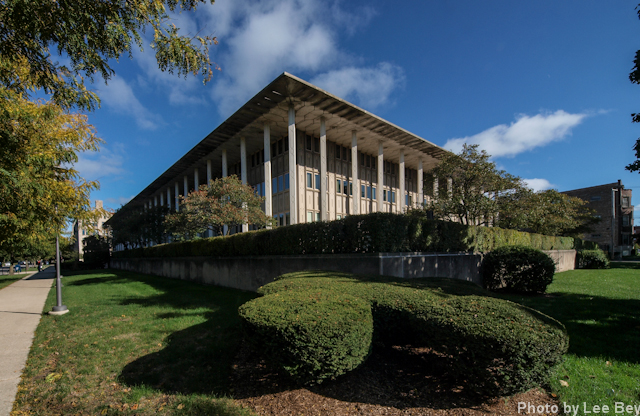 The students will be returning next month to the University of Chicago graduate residents hall — a concrete, flat-roofed pavilion-like building that cuts an unusual figure on the southern edge of the campus.
Built in 1962, the three-story, 122 room complex was originally an on-campus hotel and conference facility called Kellogg Center for Continuing Education. It was converted to dorms in 1983. The building was designed by architect Edward Durell Stone and is part of a triumvirate of modernist structures on campus along 60th Street that includes Eero Saarinen's spectacular law library at University Avenue and Mies van der Rohe's glassy and rational School of Social Service at Ellis Avenue.
But Stone's building is the odd duck of the bunch. With its monumental profile, terrace and overhanging roof supported by a forest of etched columns, the structure looks very much like a JFK-era building that would have been torn down years ago when nobody was looking.
And I guess that's the surprise for me as I saw the building this week: At a time when Stone's buildings are often under threat — two of his major commissions have been demolished since 2005 and a third, his Stanford Medical Center in Palo Alto, CA is being eyed for the wreckers' ball — the University of Chicago kept its Stone building and uses it. Indeed, the university is planning another academic use for the structure. . .but has been relatively mum on what that use might be.
So let's look around. Here, the columns reach up and accent the building's unusual roof: 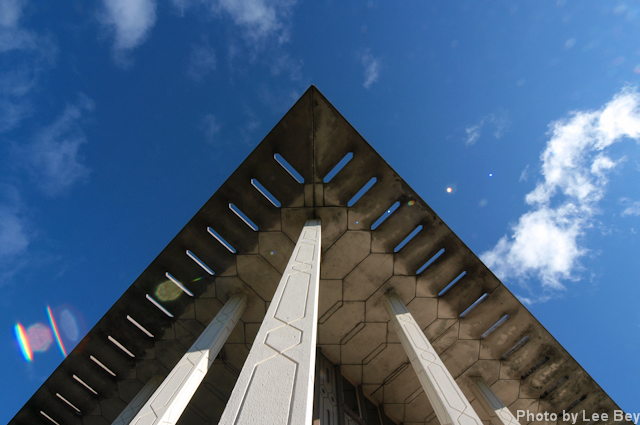 The University of Chicago building has a near twin in India. Stone's United States Embassy in New Delhi, built in 1954: 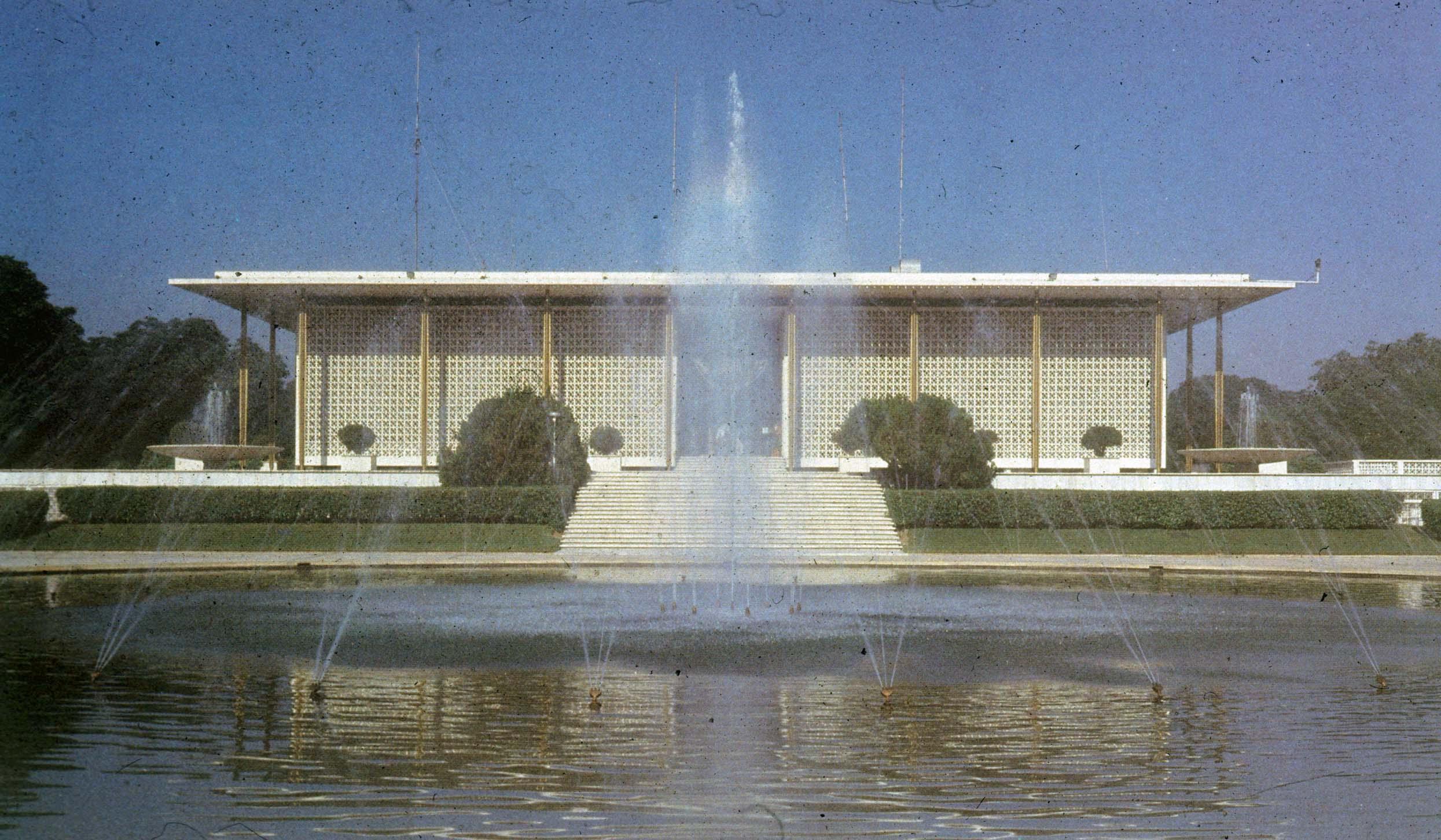 An even closer relation is the aforementioned Stanford Medical Center building. Here is an image of the University of Chicago building. . . . 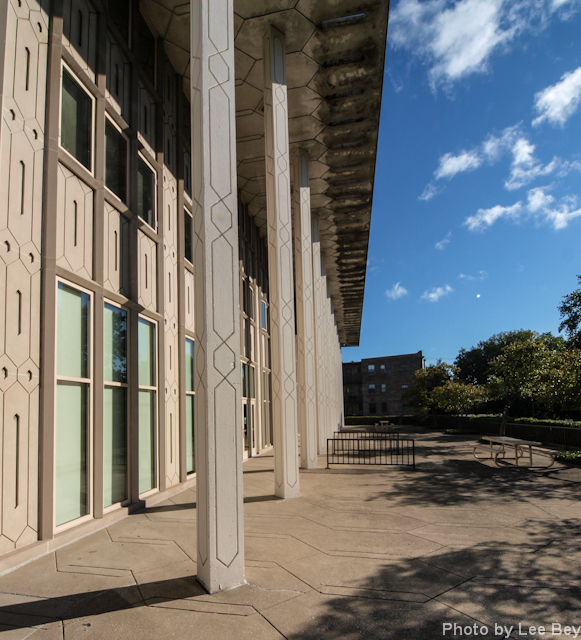 . . .and here's an image of the Palo Alto building which could be demolished in an hospital expansion project: 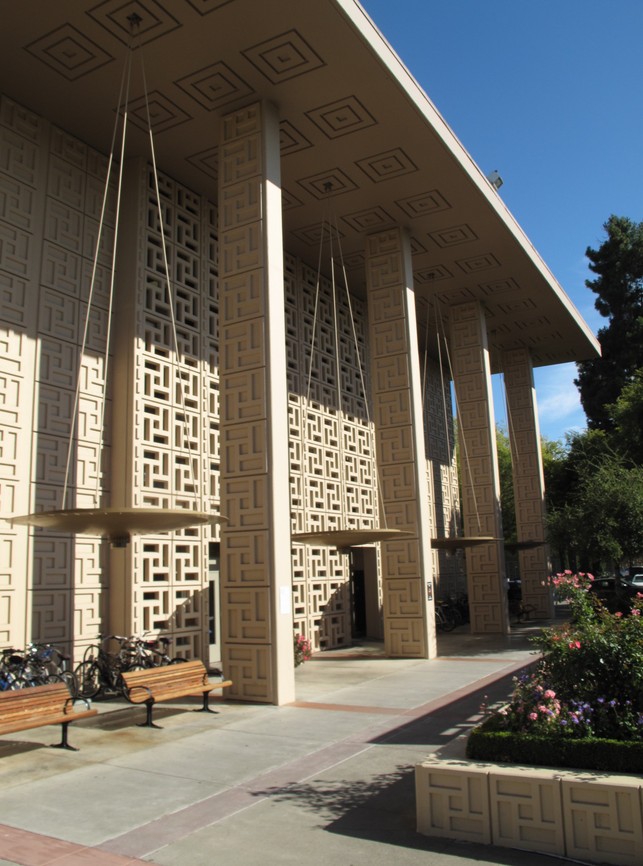 Stone, who died in 1978, is probably best known in Chicago as the architect — along with Perkins & Will — of the Aon Center, formerly the Standard Oil Building, 200 E. Randolph. He designed the first McCormick Place on the Lake — the one that burned down in 1967 and was replaced with what is now Lakeside Center.

The work of modernists such as Mies, the Saarinens and others are enjoying a rebirth now. But what about Stone, who was once one of the most successful architects in the country? Not as much, probably because his buildings, such as the Kennedy Center in Washington D.C., often look very much of their time.

And some of his building are being lost. Stone designed the distinctive arches on St. Louis' Busch Memorial Stadium which was demolished in 2005. His 2 Columbus Circle building in New York City was dramatically —and controversially — altered in 2008.

But for now at least, on 60th Street in Chicago, Stone is getting his due.