There’s one room in his Bridgeport apartment that Tim Johnson likes to make special note of when giving a grand tour. The bright, sunny space used to be the landlord's bedroom, but now it functions as a living room for him and his wife Michelle Skinner.

But that’s not what makes it special.

“I’m really proud of this room because we didn’t pay for anything in it,” Johnson announces. “Everything came from family members or we found it somewhere. Except for the credenza, we had to buy that because nothing else fit.”

It’s easy to see that Johnson prides himself in his penny-pinching skills. He says he even tracks his credit score like some others might track their favorite sports team.

But even with his meticulous financial planning, the newlyweds say that buying a home is out of the question - thanks to their student loan debt.

Johnson, 27, has about $27,000 in student loans from the University of Illinois at Chicago. He says his payments are manageable for now, but as Skinner, 23, continues through her PhD program at the University of Chicago, her $70,000 in undergraduate loans will slowly come out of deferment -- making it almost impossible for them to save enough for things like a downpayment or closing costs, no matter how badly they want more room for a baby one day.

“We try to save Tim’s bonuses for it,” Skinner said. “But the market prices have been increasing - or at least what we need has been increasing at a proportion to which we can’t save.”

“We’ve given up on it for like five years,” Johnson said. “Once Michelle gets out of school and gets a full-time position then we can start to look. And what has me worried is, (whether) we’ll have a down payment by that point.”

You don’t have to look far to find another example of hopeful home-buyers struggling to get out from under their student debt. Just a few blocks away, Martin Gleason and Shannon Glass are also doing the math to see whether they can buy a home with all their student loan debt. 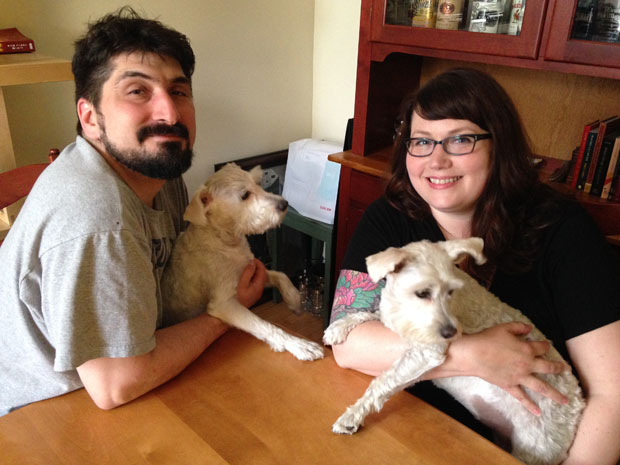 They’ve been married since 2009, and have been living in Bridgeport for the last three years. Gleason has around $96,000 in student debt from both undergrad and graduate school -- he’s currently a Juvenile Court Probation officer, but is making a career switch to IT. Shannon, his wife, is currently going back to school, and even though her job at Time Magazine reimburses about half of her tuition, she’ll still need about $25,000 in loans.

“To be fair, it’s not unbearable,” Gleason said. “But it’s also like we’re treading water.”

It’s hard to know just how many other Chicagoans are in a similar situation, as research or housing data only really keeps track of the people who end up buying a place. For example, the National Association of Realtors found that 54 percent of first-time homebuyers reported that student debt delayed saving for the purchase of a home, but they can’t count how many didn’t buy, or couldn’t buy, because of student debt.

But local realtors and lenders will tell you, they see this all the time.

“The thing that’s really sad about this is that we are, particularly in the Chicago market, at an all-time high of affordability. Interest rates are so low, that you’re able to buy much more of a house,” said David  Zwarycz, broker associate at @properties. "However, if your available funds are being depleted because you’re servicing student debt, you’re losing out on this opportunity.”

But even if wanna-be buyers with student debt can cobble together enough for that down payment, there’s still another hurdle that’s hitting them particularly hard. It’s called the debt-to-income ratio, and it means pretty much just that.

You add up all your monthly debt payments -- like student loans, car loans, credit card debt -- and divide it by your monthly income. Some experts say rent is also included in the calculation, but the Consumer Financial Protection Bureau contends it’s included in a separate equation.

New Consumer Financial Protection Bureau rules that started in January maintain that 43 percent is the highest ratio a borrower can have and still get a qualified mortgage from a lender. So if you’re bringing home $3500 a month, that only gives you about $1500 to pay all of your bills and come in at 43 percent.

And with Illinois graduates carrying an average of $28,000 in student loan debt, 43 percent can be a tough number to avoid, so a lot of hopeful young buyers are getting turned down.

Dan Gjeldum, senior vice president of mortgage lending at Guaranteed Rate, says they deal with this often. They’ve also seen a lot of parents coming in recently to co-sign to try and help the cause.

“There are more and more people who have student debt for sure,” he said. “The increase in cost of college education, as a father with four kids - three in elementary school and one in preschool - I don’t freak out daily about it, but whenever I think about it, I get nervous.”

“I don’t know if the industry could have planned ahead for it, or viewed it any differently because the debt is real, and the debt has to be paid back, I think it’s a problem that’s going to move into the future because of the rising cost of education.”

For those who just squeak in under the debt-to-income-ratio, Zwarycz says their debt still matters, as the more they carry, the weaker their buying power. And he says that’s been causing a slowdown in Chicago’s entry level market.

“There’s this large amount of inventory particularly in the city’s smaller condominiums that are typically first-time homebuyer properties. If an individual can’t sell their first-time home property that they bought five years ago, they can’t move up to the upgrade property. And that has sort of a ripple effect through the entire market,” Zwarycz said.

But there’s a reason these restrictions were put into place in the first place.

“At the end of the day, I’d rather us be complaining about lending being too strict, that it being too loose," said Daren Blomquist, RealtyTrac VP.

Blomquist said he’s worried about all this too, but experiencing another big crash like 2008 is a much bigger concern.

“Too loose lending got us into the housing bubble, so it’s the lesser of two evils, I would say, to have us have tough lending and it is keeping things in check,” he said.

“We can’t wave a magic wand and make that student loan debt not be a factor in loan qualification, and even if we did have that magic wand, we shouldn’t use it because it would have hugely negative impacts on the housing market.”

She says maybe lenders could start dealing with student debt differently in the ratio than say credit card debt from big clothing purchases or an auto loan for a fancy car.

She’s tired of seeing clients like a married couple - both doctors - who have so much student debt that their combined salaries still weren’t enough to get a loan the first time.

Lauren Chooljian is a WBEZ reporter. Follow her @laurenchooljian

This story was edited June 16, 2014, to clarify what factors are included in the debt-to-income ratio.