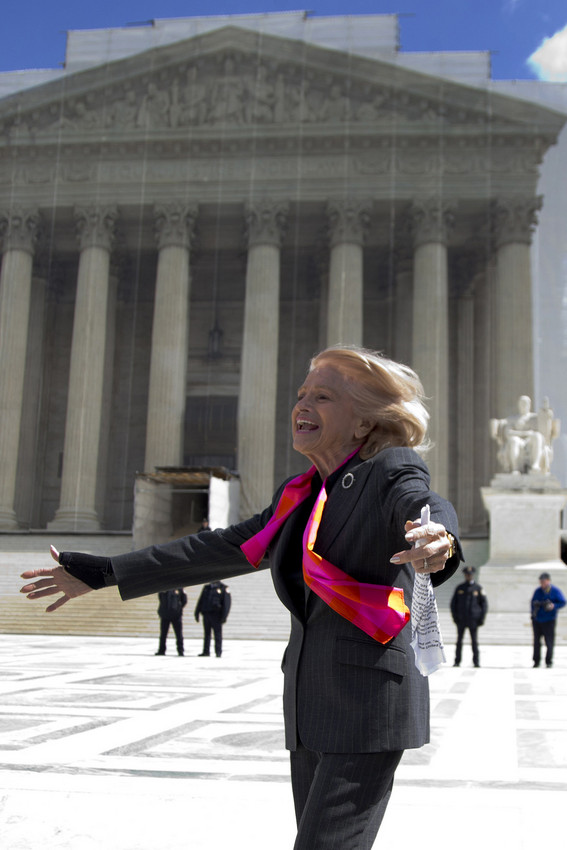 There seems to be a growing consensus that the Supreme Court will strike down the Defense of Marriage Act but step away from Prop 8, ruling that the plaintiffs in the case -- private citizens who led a public referendum to undo California’s same sex marriage legalization -- don’t actually have standing.

If that’s what they do -- and I tend to lean in that direction -- the net effect will mean that, on Prop 8, the ruling of the lower courts will stand: Prop 8 will be thrown out and same sex marriages will be legal in California again. The ruling will affect only California.

Ruling DOMA unconstitutional will mean that same sex couples married in any one of the eight states and the District of Columbia that permit it will be eligible for all the rights and privileges of opposite sex couples -- and as the Justices pointed out, there are more than 1,000 benefits from which same sex married couples are currently excluded, including Social Security survivor benefits, military family housing, tax filing, etc.

But here are a few other things to consider:

* There may be no majority opinion on Prop 8. Justice Anthony Kennedy seemed torn between wanting the case tossed and not wanting to devalue referendum efforts. But some of the Justices may rule the law unconstitutional (probably Justices Sonia Sotomayor, Elena Kagan, Steven Breyer and Ruth Gingsburg), others may argue standing (Samuel Alito, John Roberts), and some may argue that Prop 8 should be upheld (Antonin Scalia and Clarence Thomas). If the majority opinion doesn’t have five Justices signing it, there’s no precedent. If the Justices don’t rule it out on standing, this may be the only way out on Prop 8. Otherwise, the court will be forced into establishing a constitutional precedent: either there’s a right to same sex marriage (which the conservatives don’t want on the books) or there’s not (which the liberals don’t want). Prop 8 is all or nothing -- there's almost no way to narrow it down; ruling on standing avoids both of those conclusions, as does not getting a majority.

* If the Justices strike down California's ban on gay marriage by upholding Prop 8, tossing the case, or not getting a majority, it would trigger marriage ban repeal efforts in other states. Forty-one states now ban same-sex marriage. On the other hand, a verdict to find Prop 8 unconstitutional would render all of those bans illegal without state recourse.

* If the Justices rule that the citizen organizers of Prop 8 don’t have standing, that the interests of the people of California can only be represented in court by elected officials such as the state’s governor, attorney general or solicitor general, they will seriously cripple California’s referendum system (perhaps not the worst thing that could happen, given the state’s history of controversial, and frequently problematic, propositions).

* Standing -- whether there is an actual adversarial relationship between the parties before the court -- may actually be more tentative in DOMA than in the Prop 8 case. In fact, the Justices appointed an attorney to argue there’s no standing in DOMA but not in Prop 8.

In DOMA, the government has already determined the law is unconstitutional but has continued to enforce it in spite of lower rulings that agree. In other words, the Obama administration and Edie Windsor, the plaintiff, are on the same side. In the meantime, the people defending DOMA are with the House of Representatives’ Bipartisan Legal Advisory Group (BLAG). Both Roberts and Scalia made a point of saying it was unprecedented for a case to come to the court in which the law was being defended by a group that had not sustained injury or, basically, had much to do with the original suit. Nancy Pelosi, the Minority Leader in the House, has argued BLAG does not, in fact, represent the House’s interests but only that of the GOP leadership. (BLAG has racked up a a $3 million bill so far.)

If the court decides BLAG doesn’t have standing, it’s less clear what will happen. Most likely, there will be no precedent and DOMA will continue on the books until there’s another case or until Congress repeals it. Windsor would most likely get her tax monies back, as ordered by the lower courts.

* Should there be no decision on DOMA, and if the law gets kicked back to Congress for repeal, the votes would break straight down party lines in the Senate but not quite in the House. There are currently six Republicans who support repealing DOMA, and 19 Democrats who support DOMA, including two in Illinois: Jerry Costello and Dan Lipinsky.

* The National Organization for Marriage has said that, should there be a vote for same sex marriage in either case, it will begin a campaign for a Federal Marriage amendment, banning marriage equality nationwide. “We need a solution in this country, we cannot be, as Lincoln said, half slave, half free,” said Brian Brown, NOM’s president. The FMA has been around since 2002, when former Supreme Court aspirant Robert Bork helped draft it, but it’s never had enough support to even come for a vote. Nothing suggests it would have any better success now.