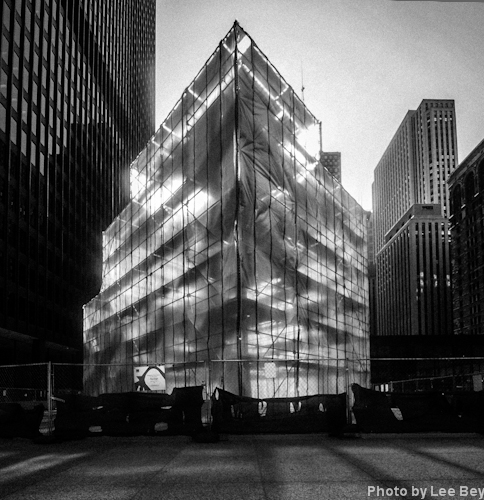 Flamingo, the five-story, vermilion colored steel sculpture that has been perched on the plaza of the Mies van der Rohe-designed Federal Center since 1973, is undergoing a month-long restoration designed to make the famed work of art shine once more.
The 30-ton work is now shrouded in a mysterious-looking opaque scaffold box – providing a bit of a visual punch itself. Inside, workers and conservators will spend the next month applying a zinc primer designed to make the sculpture more durable.
Next will come a topcoat of paint which will bring back the work's visual vibrancy and allow the industrial steel beauty to stand up against the elements, according to the complex's owner, the federal General Services Administration.

It's good to see the federal government doing right by one of the the city's most celebrated works of public art.  Designed by Alexander Calder, Flamingo was a big deal when it was dedicated – Calder himself came – in 1974. In fact, Calder was a fan of circuses and he led a procession of elephants, 40 hours and calliopes up State Street as part of the dedication activities. Calder also dedicated his mobile, Universe, in the new Sears Tower the same day. 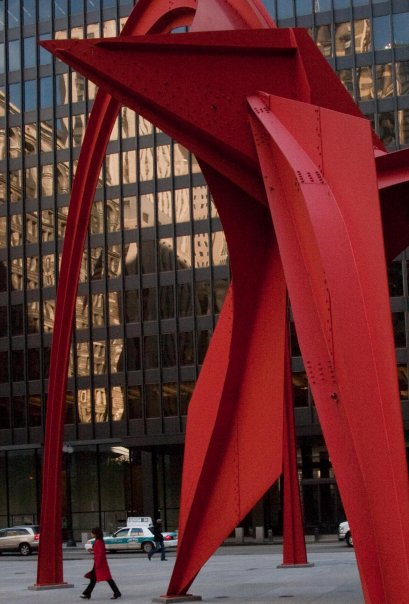 Built for $350,000 in 1973, the sculpture is a colorful counterpoint to the dark-clad buildings of the Federal Center. Calder, in his early 70s, supervised the planning and the construction of the sculpture from his Roxbury, CT studio.

Now back to that circus thing. Calder really liked circuses. And when he wasn't leading them, he was making his own minatures ones, as early as the 1920s. Here's an enjoyable 1961 film clip of Calder doing this thing:

The GSA estimates that the restoration will cost $213,226.