I'm hanging out in Miami this week, where rumor has it that Speaker of the House John Boehner is putting the squeeze on Florida U.S. Rep. David Rivera to drop out of his congressional race. The hope is, of course, that if Florida U.S. Sen. Marco Rubio's best buddy quits now, the party will have a chance to name a new candidate — one who won't be indicted right after the elections. 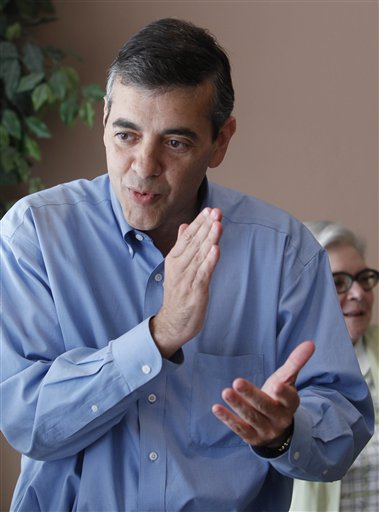 As I mentioned when I wrote about this situation on Monday, Rivera was probably one of the reasons why GOP presidential nominee Mitt Romney had not named Rubio as his running mate. Rivera, whose Wikipedia page reads like a rap sheet, is probably about to go down hard.

* Justin Lamar Sternad, the ringer Rivera allegedly set up to run against his Democratic rival Joe Garcia in the primaries, just flipped on him. Sternad told the FBI that he knew his campaign manager, Ana Alliegro, one of Rivera’s best friends and operators, was the point person for Rivera to orchestrate and finance his upstart campaign. Sternad also said that Alliegro used to refer to River as “D.R.” and “The Gangster.” Last week, the FBI claimed to have the envelopes in which the more than $30,000 in cash was delivered, and said it was testing them for fingerprints and handwriting samples. The Republican Party has pulled all funds from the race, and Romney has explicitly banned Rivera from his Florida appearances — even in Rivera’s own district. AddictingInfo has a fantastic rundown of the whole hilarious mess.

* Alliegro, who went missing September 5 after the FBI raided her apartment and took her computer and cell phone, is still out of sight. The stories swirling around her have her everywhere from out of the country to the Ritz-Carlton in Naples, Fla., where she's supposedly trying to cut yet another deal with the FBI so she doesn't do any time. Bloggers all over Miami have gone nuts speculating about Alliegro's whereabouts.

* Alliegro, self-described as a “Republican bad girl," has proven to be the stuff of telenovelas. She's been all over the news down here latey, with stories detailing: a shoplifting charge; the time she took a shot at an ex-husband while she was buck naked to try to force him to remarry her; and an 83-day marriage to former Miami Mayor Joe Carollo, who presided over the Elián González debacle and was alternately known as “Crazy Joe” or “King of the Crazies." (And to be clear, it was Carollo who filed for a separation because Alliegro was too crazy for him!) The Miami Herald's Fabiola Santiago goes over the highlights in this article, in which she also points out that Karl Rove is among Alliegro's Twitter followers.

While his world comes crashing down, Rivera is keeping as low a profile as a man running for public office can. Both his Facebook page and Twitter page are barely alive. His campaign website hasn't had any activity for more than a month.

In the meantime, new polls this week put President Obama well ahead of Romney in Florida; Democratic Sen. Bill Nelson leads GOP challenger, Rep. Connie Mack, and Rivera is behind Garcia. Conservatives are bitching about polling methodology, but no one is coming to Rivera's defense.

They're also pretty sure Rivera will never, ever, resign.