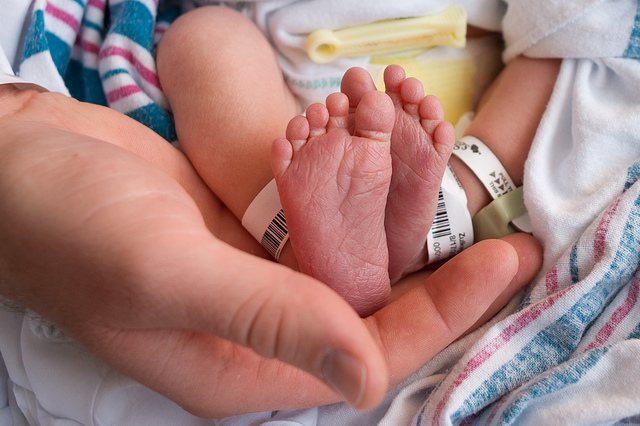 Back when I was pregnant, I blogged about all the things that had triggered my tearducts during that hormonal time. “That’s nothing compared to how much you’ll cry after you have the baby,” my friends told me. I couldn’t really grasp what they were talking about until after I had Paul, and I realized that my eyeballs were basically a leaky faucet. Sometimes there was a cause for the leak, and sometimes not.

I want to clarify that according to what I’ve read, general weepiness post-baby is totally normal, thanks to the crazy cocktail of hormones, emotions and sleep-deprivation that’s coursing through your body. I haven’t had, however, any feelings of utter hopelessness, an inability to cope or desire to hurt the baby (except the occasional humorous discussion of throwing him away when he’s being uncooperative), but I could see, easily, how a new mom could slip from desperate moments to a general feeling of desperation (in which case, if that applies to you, I’d encourage you to talk to people and seek some help).

Here are a few examples of the various types of crying jags I’ve been sent on over the last few weeks.

The Raising Arizona cry. My first morning with the baby, all at once it hit me that I loved this little thing who was otherwise a complete stranger to me for no other reason than I made him, and that it would be a very long time before he knew how much I loved him (if ever) and that someday he would grow up and be a crappy teenager and then a young adult and then an old adult (god willing) and that my parents went through it all with me and their parents with them and it was all too much. This cry looks exactly like this:

I’m not going to lie, I just teared up watching that clip for the 20th time in the last two weeks.

(This cry can also be elicited by people who ask you questions like “Can you believe you made him?” Be prepared for friends and loved ones who seem to elicit a bit of perverse pleasure in pushing your emotional buttons.)

The general eye-leak: This cry is humorous in how cliched and predictable it can be. I cried as I watched the slideshow of the professional photos taken of the baby (set to especially-triggery sweet music) that I had been in the room for just 15 minutes earlier. Then I cried looking at a photo of a random baby crying on the brochure for the photo company. I also often got choked up just singing to the baby, even to “Call Me Maybe,” which I have adapted to “Paul Me Maybe.”

The "I miss my husband" cry: I went into the hospital on a Wednesday morning and was discharged on a Sunday. We didn’t figure out how to get a few hours of sleep in the same bed until I think the next Wednesday or so. Steve force-marched me to bed early one night so I could get a few hours of shut-eye before taking the baby late shift and I cried because I missed sharing a bed with him like normal. “We’ll get back to it soon, stop crying,” I ordered myself, and then thought about how nice my husband was to me during labor and how good he’s been with the baby and then I cried some more, and also cried a bit because he just wanted me to get a few hours of sleep and I couldn’t even do that.

The "I’m so happy" cry: This happened the other night while I was sitting on the couch with Steve, cradling the baby and watching the movie Friends With Kids. I started crying because for a moment, that was all I needed in the world to be happy, and I had it — and I HATED that movie!

The "I can’t do this" cry: I don’t mean “I can’t do this” in terms of raising the baby. It’s “I can’t do this” in terms of maintaining a semblance of my regular life in addition to a new baby, of feeling like everything has changed yet you sort of have to carry on as if everything is the same. This is not something that I was never forewarned of, but still, I succumbed to the temptation to keep on top of the laundry and dishes and tidying of the house and going for walks in addition to having my friends over to see the baby because I love my friends and they wanted to do nice things for me and I wanted to show off my adorable tiny baby.

But having a baby is not like having a tooth taken out: It really does take it out of you for much longer than might feel normal or convenient. The parts that produced the baby are in active recovery, you’re exhausted physically and, as I’ve established, emotionally. I cried the other night after my husband told me for the 100th time that I need to take it easy, and the crying was partially because he was right and I was so tired, partially because he was being so nice to me and I was making him worry and partially because I realized that I can’t be exactly the same girl I was before I had the baby (but did I want to? I don't know). I can’t be as active or social or accommodating or pretend that my life is exactly the same only add one baby. I need to get over the idea that sitting a bit more and asking friends to come by a bit later doesn’t mean I’m lazy or rude or that talking earnestly about the baby doesn’t mean I’m a boring sellout (or if it does, I just can’t worry about the people who feel that way).

Anyway, after that particular cry, I got more sleep than I’d gotten since the baby came home. And since then, I am slowly drying up, eyeball-wise. On Friday we sang “Happy Birthday” to him for his two-week anniversary on the planet, and I didn’t shed a single tear. I'm saving them for when he turns one month old.