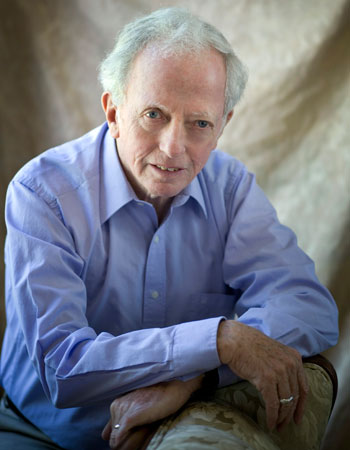 I began running a few years ago and was quickly turned on to the training regimens of today’s interviewee, who has maintained careers in both running and writing that are impressive for their quality, output and longevity.  He has contributed to Runner's World for longer than any other writer, an article by him having appeared in that publication's second issue in 1966.
Author of 36 books, including the best-selling Marathon: The Ultimate Training Guide, now in its 4th edition, Higdon also has written books on many subjects and for different age groups. His children's book, The Horse That Played Center Field, was made into an animated feature by ABC-TV. He ran eight times in the Olympic Trials and won four world masters championships. At the American Society of Journalist and Author's annual meeting in 2003, the Society gave Higdon its Career Achievement Award, the highest honor given to writer members. You can learn much more about him and his programs here.

What have been some of the most beautiful runs you’ve ever been on?
Indiana Dunes State Park remains at the top of my list. There's a bit of everything: flat and fast to steep with scenery, on clear days the Chicago skyline. In second place, maybe the Redwood Forest in Rotarua, New Zealand. Bermuda has probably the most scenic marathon among the 111 I have run.

What do you find are some of the silliest trends in running, either in terms of training or gear?
I'm not sure silly trends exist in running. At least I'm not arrogant enough to brand so-called trends as "silly." As long as you are a runner, and love the sport as much as I do, I'm comfortable with whatever silliness you carry in your running baggage.

What do you do (or did you do, knowing you don’t run quite as much as you used to) when a run is just a slog? Was there a physical or mental way that typically made the run go by faster, or do you just suck it up (or just abort?)
Run being a slog? Does that ever happen? Maybe to mere mortals. If there is a physical reason why any run is a slog, then you need to bail out and hope you are not more than 10 miles from your parked car.

You’ve published so many different kinds of writing; what’s one style  that you never tried that you’d like to (or that you wished you were more proficient at)?
If you had asked me that question 3 or 4 years ago, I would have answered that I would like to write a novel. But since that time, I fulfilled that desire to write a work of fiction. Titled simply Marathon, it describes the 72 hours leading up to a major marathon that strongly resembles Chicago.

What was your reaction to the New York marathon being canceled in the wake of Hurricane Sandy?
I don't want to second-guess Mary Wittenberg, director of the New York City Marathon, or the Mayor who in their earliest pronouncements in the middle of the week immediately after the hurricane wanted the marathon to proceed as planned. I thought then it was a bad decision, but they corrected themselves and cancelled the race. That was the right decision, even if it came at a late hour. It did not make sense to me to have runners frolicking through the streets of New York while people were suffering, their homes destroyed, without power. Many runners decided to run anyway in Central Park without worry about time and distance. Others went to near the starting line in Staten Island to help in the cleanup. I applaud them all. I also applaud all those who told the marathon organizers, no, this is not something we want happening in our back yards during this critical time for New York City.

Running seems so incredibly basic yet it continues to be a topic of much conversation and publication. Why does such a simple activity generate so much discussion, reflection and advice?
It's a self-help topic, certainly. Back when I first got into running, nobody cared much about the sport, except at the Olympic level and, in the case of the marathon, once a year at Boston. But now we have marathons that attract tens of thousands of runners. We are an attractive demographic, so our foibles attract a certain amount of interest.

Related, running is an incredibly intimidating activity for many people. Why do you think it’s so much more daunting to many people than, say, bike riding?
Daunting? I probably put more miles in biking these days than I do running, and whether the word "daunting" should be attached to running, I don't know. I also hate the word "grueling" being attached to our endurance events. I'm going to suggest that biking is a lot more dangerous an activity than running, particularly in areas where we share the roads with four-wheeled or four-legged creatures. Cars can't hit you and dogs can't chase you when you're running cross-country.

What do you typically think about when you run?
Anything and everything. One of the great pleasures of running is to allow your mind to freewheel while you run. Anything can attract my attention from a seagull pitter-pattering on the beach to a sunset to an attractive female runner who says, "Hi" as we pass, even though we may never see each other again.

I had lunch with some friends last year who were in town to run the Chicago Marathon and I said that marathon running/training didn’t seem very fun to me. “It’s not,” they confirmed. Do you agree?
No, but I don't really care whether anyone--particularly non-runners--considers what we do as being "fun." Just please get out of our way, but it would be nice if you kept your dog on the leash and didn't text while driving past us in your overpriced cars. But, hey, hasn't the focus of this interview been rather negative so far. I would rather focus on running as a positive, rather than a negative. If running were that difficult, you wouldn't find so many people doing it these days.

Throughout your life you’ve accomplished so much as both a writer and a runner. In the last couple of decades, which was more difficult to generate, running goals or writing goals?
Running goals were easy. At the start of the year, you simply asked yourself, what do I want to accomplish in the next 12 months? For me, it might have been successful participation in an Olympic Trial. It might have been trying to win a world masters championship. Or it might be simply getting through the year healthy and uninjured. Writing goals? I'm not sure I had any writing goals. Each article assignment, each book contract, provided a goal of some sort. The goal was to finish the assignment, to get paid, then to move onto the next assignment.

You’ve mentioned in other interviews that you’re an incredibly organized writer. What are some of your methods for staying so organized?
Did I use the word "incredibly?" That seems to be a bit of an overreach. If Hemingway had ever used "incredibly" in a first draft, that would have been the first word scratched out in draft two. Organization? It's part of a person's mindset. It's not being afraid of doing what you're good at doing. I've always been able to get up in the morning, go for a run (or more often now a bike ride), have breakfast, then sit down at the typewriter (or more often now a computer) and begin the job of the day. I've never suffered writer's block. I don't know what it is. Starting each assignment, I usually had a clear path down the road to finishing the job. Because I was a good researcher and interviewer, I usually knew the ending before I knew the beginning. One editor once told me that she loved my articles, because they had a beginning, a middle and an end. Made her job much easier. She could concentrate on commas rather than paragraphs. I took whatever time it took to do produce as perfect a product as possible. It might be an hour's worth of work for a 600-word column. It might be a year or more for a 100,000-word book. I've never felt I had a "method" for writing. Nothing that would make the cover of a magazine aimed at embryo writers. I just wrote. Organization enabled me to write swiftly, because I never had to pause to think of what to say next.

You originally got your start as an aspiring comics writer. Do you still enjoy comics? Which do you read?
Actually my aspiration was not to be a comics writer; it was more to be a comics artist. But in creating the art, I also created the words that accompanied the art. My goal in high school was to someday create a comic strip the near equal of Terry and the Pirates by the most accomplished writer/artist of the era when I was in high school, maybe of any era. Milton Caniff, and he was considered the Rembrandt of the Comic Strips. I drew comic strips in high school, but also wrote them. Eventually, I realized I was a much better writer than runner and shifted careers. I rarely read comic books any more. They cost too much vs. the 10 cents I paid when I was a kid. They also drag the stories out too long. Too much fighting and not enough thought. My son has a subscription to The Amazing Spider-Man, so I borrow his copies now and then and read them eight at a time. I more often read the comic strips that come with the papers. Sadly, they are shrunk to such tiny boxes that sometimes it's hard to read the word balloons. You almost need a magnifying glass for Doonesbury. With the shrunken sizes, all the well drawn adventure strips have disappeared. You don't see anything as well drawn or well written as Prince Valiant, Tarzan or Flash Gordon any more. Instead, we're stuck with gag-a-day. Among that genre, I like Frazz, because he's a runner and triathlete and For Better or For Worse, because there's some continuity to the story line. I might add that I collect original comic art and have a lot of it hanging on my office walls. I'm staring at a Daredevil page by John Romita, Jr. right now.

You’ve said that when you were younger, running wasn’t an acceptable activity for anyone over 17. Why do you think that was so, and what, broadly, do you think was the turning point for running becoming a more widespread hobby?
There was no competitive opportunities: no track meets or road races, or at least very few opportunities for out-of-school athletes. When I first ran Boston in 1959, only about 100 others participated. Very few track or cross-country runners continued beyond high school and college, and most of them were fairly accomplished, capable of sub-3 marathon times. But the focus had begun to shift toward a fitness-based sport, prompted by best-selling books by Bill Bowerman (Jogging) and Dr. Ken Cooper (Aerobics), but also an article about the Boston Marathon titled "On the Run from Dogs and People" that I wrote for Sports Illustrated in 1963. By the end of the 1960s, a thousand runners entered Boston, and running was en route to becoming a mainstream sport, helped by Frank Shorter's gold medal in the Olympic Marathon in 1972.

What do you like most about using social media as a tool for coaching?
I can do it at home.

How does it feel to be the 339th person interviewed for Zulkey.com?
It depends on who you pick for # 340.