Ask a couple how they met and many can jump into a well-practiced story. Chris Dempsey and Heather Krueger don’t have to say anything — they can just turn the TV to the Hallmark Channel.

Dempsey met Krueger when he offered to donate a part of his liver to her a few years ago. The transplant saved her life, and the couple fell in love. They’re now happily married and living in south suburban Orland Hills. Their story is the basis for Once Upon a Christmas Miracle, a film that, since its premier earlier this month, has become the highest-rated Hallmark Christmas movie of all time.

“I was surprised, but at the same time I wasn’t, because so many people had said, ‘They’ve got to make this into a movie,’” Krueger said. “Still, to have my life a movie? It blows my mind.”

The film takes many details from Krueger and Dempsey’s real story, but it unfolds in classic Hallmark fashion. The couple is played by very attractive actors, cast in soft light, whom the viewer knows are destined to be happily married by the final scene. Hallmark movies follow a formula so precise it's the subject of parodies, but the film’s fans like it that way — it's comforting. Some even use spreadsheets to keep track of Hallmarks’ many offerings.

In reality, Krueger said, she was far from certain things would work out. Krueger, now 29, was diagnosed with stage 4 liver disease in March of 2014. By June, her situation was dire.

“Based off my bloodwork, they said I had less than a 50 percent chance of living another two months. It had gotten so bad, so fast,” Krueger said.

Krueger was placed on a liver donor list — her sister even made a flyer with information on how to be a donor that they put up around the south suburbs. Dempsey, now 40, was working for the south suburban village of Frankfurt at the time when he overheard a coworker in the breakroom who happened to be Krueger’s cousin talking about her need for a liver donor.

“I thought to myself, you know, what if I was in that situation?” Dempsey said. “And I said I was going to go get tested.” 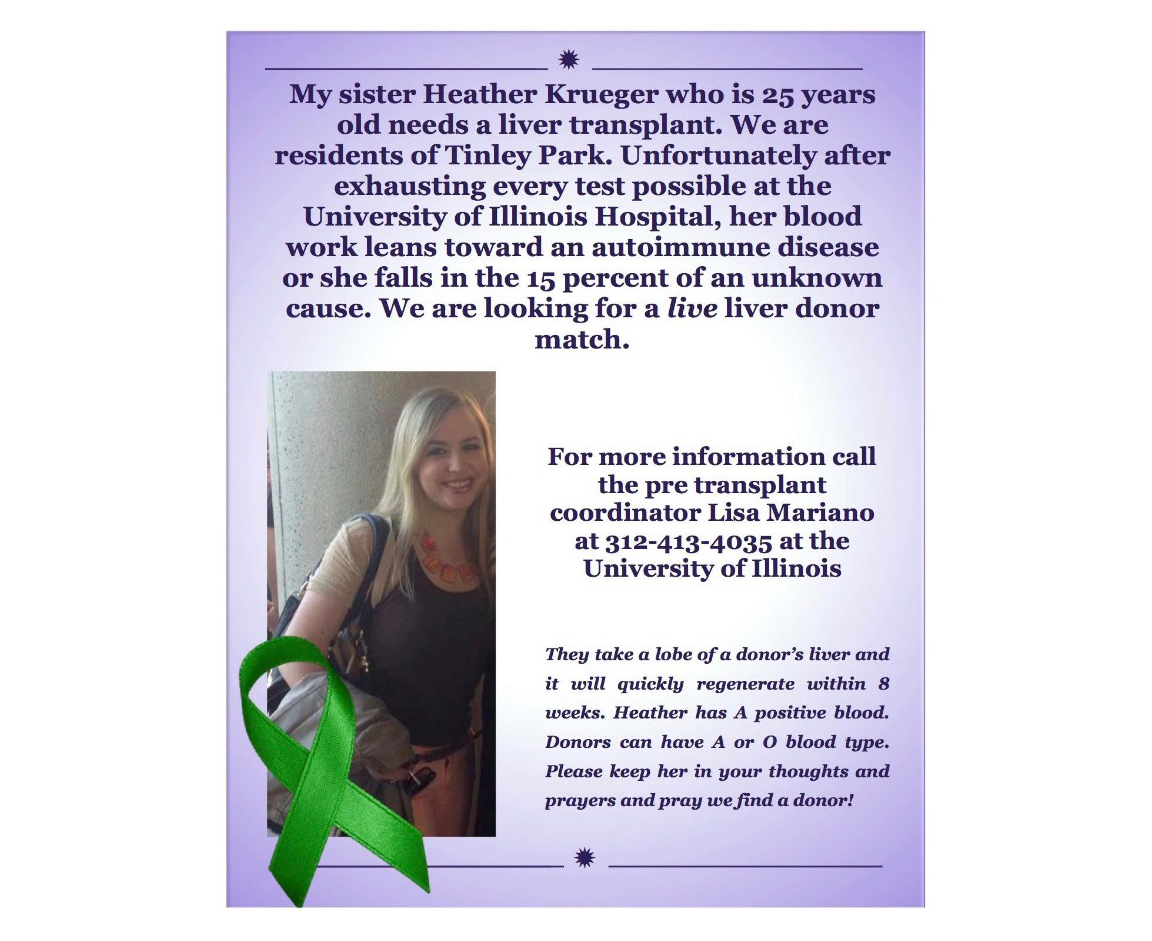 Dempsey was a match. Pretty soon he and Krueger were spending a lot of time together, sharing meals and going to movies in the runup to the transplant operation. One night, before the surgery, Krueger took the leap and gave Dempsey a kiss, which he said made him nervous.

“I immediately told her, ‘You owe me nothing for [the transplant],” Dempsey said.

The film borrows the line, but ups the drama. Dempsey delivers it as he and Krueger lay in hospital gurneys, moments before they’re wheeled into their operating rooms.

Dempsey said that most of the feedback he’s gotten on the film has been positive, but it has caused him a little trouble, at least with his male coworkers, at his job as a manager at an Amazon warehouse in Monee. “They tease me, ‘Oh, thanks, Chris. [My wife saw the movie], and I have to live up to this now,’”” Dempsey said.

The Hallmark version of Krueger and Dempsey’s love story does take a few liberties. Krueger gets a little taller; Dempsey gets a full head of hair. And the film compresses this entire saga into the first few weeks of December. But although she may not consider her story a Christmas miracle, Krueger said the holiday has new meaning now. 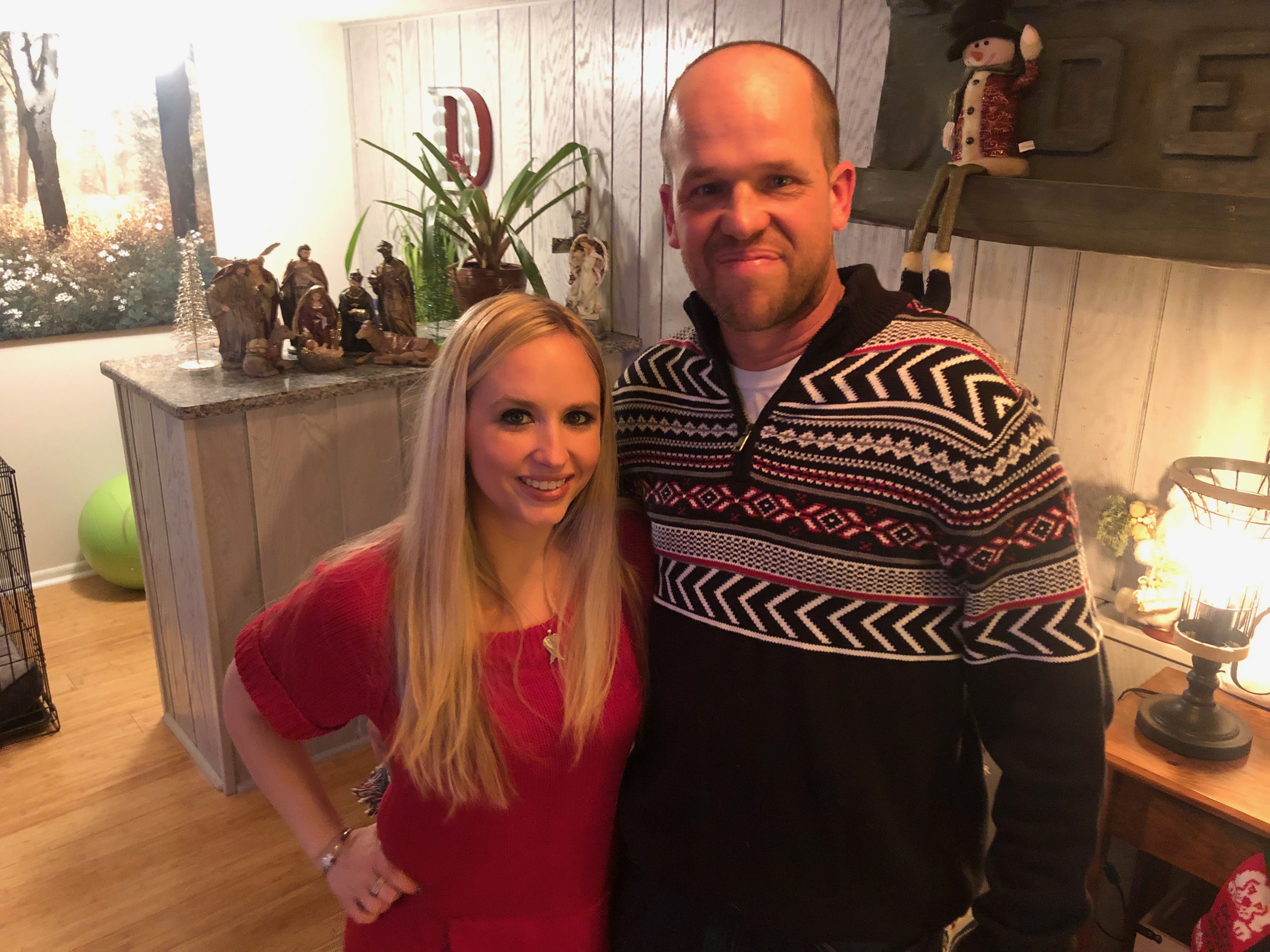 “The Christmas right before the transplant, I was at my worst,” Krueger said. “ So Christmas means so much more to me now than it did before, because I thought that was going to be my last Christmas.”

Ultimately, Krueger and Dempsey said that the best part of having their story turned into a Hallmark movie is the hope it's brought for others in need: they said hundreds of people have reached out in the last few weeks to say it inspired them to become organ donors.