A strange new vehicle appeared on the streets of Chicago for the first time on March 25, 1917. It was called a “bus.”

Since 1859 public transit in Chicago had been–literally–street railways. The first railcars had been pulled by teams of horses. Then came cable cars, and finally electric streetcars. For moving large numbers of people, streetcars seemed to be the ultimate form of surface transportation. 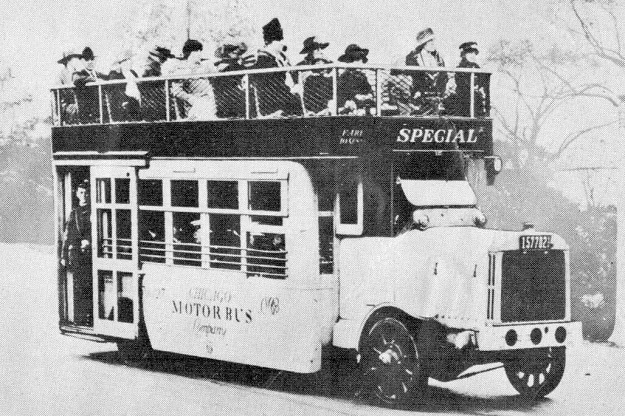 Meanwhile, the automobile had been invented, and was evolving. Though early gasoline engines were small, they soon became bigger and more powerful. By 1910 full-size gasoline buses were a reality. Since buses weren’t tied to rails, they had more flexibility than streetcars.

The City of Chicago had granted a transit franchise to the Chicago Surface Lines company. But the boulevards and parks were controlled by three separate park district boards. In 1916 the new Chicago Motor Bus Company was awarded a franchise by the Lincolon Park District. Now, on March 25, 1917, their new vehicles were ready to roll.

Mayor William Hale Thompson and a collection of dignitaries boarded the first bus at Sheridan and Devon. The ceremonial trip moved off over the regular route, down Sheridan to Lincoln Park, through the park and over various streets, until reaching its south terminal at Adams and State. Then, while the invited guests were brought back to the Edgewater Beach Hotel for a luncheon, revenue service began.

The buses operated from 6 in the morning until 1:30 a.m. Each double-deck vehicle had a two-man crew, with a conductor to collect fares and a “chauffeur” to drive. Passengers could board at any intersection. Though only 11 buses ran the first day, another 39 were on order. 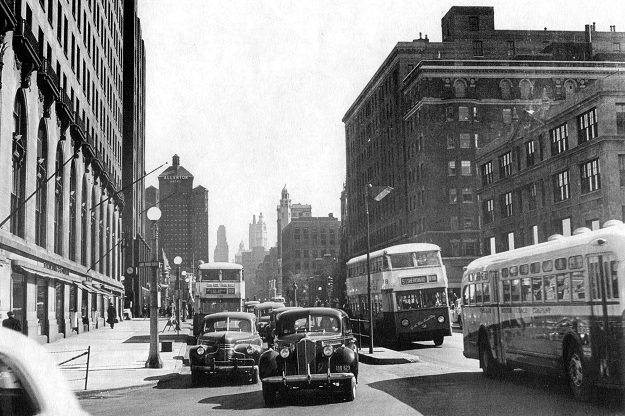 The buses were popular from the start. True, the 10-cent fare was higher than the 7 cents paid on the streetcars. But the ride was usually faster–and prettier, too.

During the next few years, the three park districts gave franchises to other companies. As the advantages of buses became more apparent, even Chicago Surface Lines began replacing their streetcars with the rubber-tire vehicles.

All the different park district bus operators were later combined into the Chicago Motor Coach. That company continued in business until 1952, when it was bought out by the CTA.