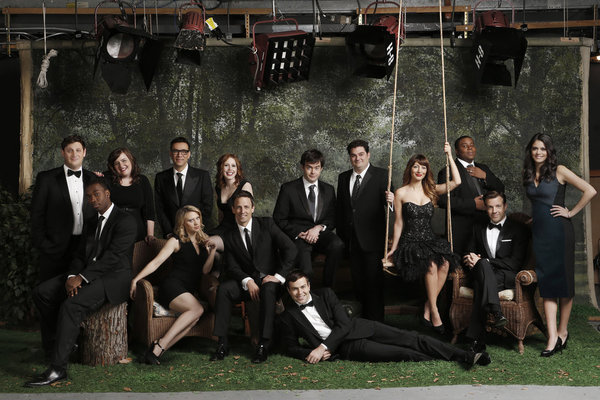 You know those cool photos that sandwich the commercials on Saturday Night Live? Today I'm speaking with the woman behind them. A native of New Jersey, she began her career in film production and music publicity. She joined the staff of SNL in 1993 as an assistant to photographer Edie Baskin. In 1999 she took over from Baskin, becoming responsible the celebrity portraits used as commercial bumpers on the show.

Tell me about shooting the opening credits of the show. I was always curious to know how sincere and spontaneous those shots of the cast members were.
I came up with this concept of asking them individually what part of New York means something to you, where do you hang out? What is your New York? And that’s kind of how we went about it. So that was kinda fun—like Jason Sudeikis was playing basketball and things like that. So... I kind of approached it in a more personal level for them.

Was that very time intensive? To go all around the city for each of the cast members?
It was, but you know we have a producer, and we had to keep it at a certain amount of time. The thinking about it and the pre-production—the location scouting and getting it right, was the big time-consuming thing bit of it. But obviously the shooting had to happen really quickly,which is very exciting.

I read that you shoot the bumpers during the rehearsals, is that true?
The show has been run on a traditional schedule for 38 years now. It’s always kind of been the same, it doesn’t really stray too much from a week-by-week kinda thing. So I shoot on Tuesdays the host, and the band on Thursdays. On Thursdays there are rehearsals going on but on Tuesdays the building is closed so I have the whole place to myself. And sometimes we shoot both on Thursday which is fun for me because, say it’s like Paul Rudd [hosting] or whoever, the band is playing, Paul McCartney’s playing so [Paul Rudd] gets all giddy about that. It’s kind of fun, to be shooting when someone’s rehearsing.

What were some of your favorite rehearsals you’ve overheard?
That, there you go. That was just so incredible, I’ll never forget that, it was just amazing. Everybody in the studio was just feeling this sort of like LOVE of music. He just was so giving, Paul was. You know they only had to do two songs but they rehearsed about 15. Beatles songs, whatever. He’d just start playing. There was a lot of love in the room for sure.

Do you attend the live shows each week?
Yeah.

That must be a lot of fun. Do you go to after parties?
Eh, you know I’ve been there for years now so not as much as I used to. But, every week feels like the first week. It just always does. There’s always that excitement and adrenaline, you want to kind of hang out and just talk to people.

Why did you choose that kind?
It has the key ability of doing bursts, which gives me the option to do these animated bumpers I sometimes do.

How do you decide when to use those?
Just when the idea strikes, and if we have time. They’re always fun to do and I try to do one every week.

Sometimes you use props in the photos. How do you decide whether to use them, and do they come from the prop department?
Yeah we got a prop department, we got a costume department. I’m very lucky to have all this stuff at my disposal. It’s just like a lot of ideas, brainstorming each week. Since I’ve been doing it so long, trying to come up with new ideas, kind of fit them with the right person. So, it’s a great problem to have. I love prop-y stuff like that, in redoing old scenes that we’re familiar with, putting somebody in a scene you wouldn’t normally see them in, to look at it different, week by week.

I love that Elvis Costello-themed photo you took of Justin Timberlake.
Yes, I’m so glad you caught that!

In the case of that, do you tell Justin Timberlake what you're creating?
Yeah. And you know he just makes it his own. I’m not telling him what to do, I’m like, this is the reference, so he’ll just take it and run, obviously. He looked at all kinds of different things, but I kind of wanted to stick with what it was, I wanted to stick to the recognizable image because he was jumping around or whatever in the same costume. That’s [the image] I chose, but there’s a lot of great outtakes.

What happens with all those outtakes?
Um, you’ll see them one day!

How often do the subjects turn down a concept that you’ve given them?
Not too frequently. For the show they’re pretty free and easy, and willing to do things. You know I have to say I have a lot of good ideas, so sometimes we have an embarrassment of riches really, there’s too much and we can’t really fit it in. So that’s not too often, Of course a few times, but nothing too dramatic.

Do you ever re-use an idea that someone might have turned down?
No, because our wardrobe people won’t let me. I’ll say something that’s already been used and they’ll be like no they did that back in 2004, remember? They have such a memory of it and I’m like are you kidding, no one’s going to remember! So no I can’t do that.

Who are some hosts or musical guests that proposed their own ideas?
Will Ferrell came up with an idea of him in a family portrait with a Chinese family. That was really funny. That’s the one that sticks out most in my head.

Who have been some of your favorite hosts or musical guests to work with?
They are all great. I of course get that question a lot. The ones who come back again and again are always wonderful, you feel like family--you know, like Alec [Baldwin] and Justin. But you know, everybody brings their own thing, and the ones that do it for the first time bring that extra jolt of excitement and newness.

For the first time hosts, do you get a sense of what kind of host they’ll be in your time working with them?
Not really. On Tuesday it’s early, they’re pretty fresh to the week. There’s so much that happens after that: meeting with all the writers and deciding what sketches to do, then a read-through with Lorne [Michaels] and the whole cast, and then there’s rehearsals and cuts. I know they’re always excited and thrilled to be a part of it, and it’s so wonderful to be around that kind of energy.

Typically most SNL hosts tend to be actors or comedians, but they also have athletes and musicians come and host. Is there a type of host, career-wise, who tends to be the easiest to work with?
It’s really fun to have like a Peyton Manning or something like that. Well, he does commercials so that’s not so true. But the ones that you don’t [normally] see in this arena are really fun. Who would that be? Like Derek Jeter, when he did it, was great fun. Well, like a Mick Jagger, of course. For them to take the piss out of themselves: what a gift!

Who was the first high-profile subject that you ever shot, before SNL?
You take me so far back. Well, I remember Aerosmith being the first show I did. Before SNL, I don’t remember.

Well for that Aerosmith show, what was that experience like and what did you learn from it?
To throw them props. Do things like... I handed Steven Tyler a hairdryer, and it was the funniest picture. Like he actually blew dry his hair, that kind of stuff. I was like ah, that’s something! There’s something fun to do.

So, you don’t just shoot SNL. What are some shoots from your career that you’re most proud of?
I was actually on a tour with Aerosmith for a while, and I was proud of the archive I put together for them. I did Kate Hudson’s wedding, I did Liv Tyler’s wedding. The people I’ve met that asked me to be part of their personal lives—and a lot of them have—that makes me really proud.

How does it feel to be the 344th person interviewed for Zulkey.com?
I’m exhilarated by it! I’m inspired to keep doing what I do.