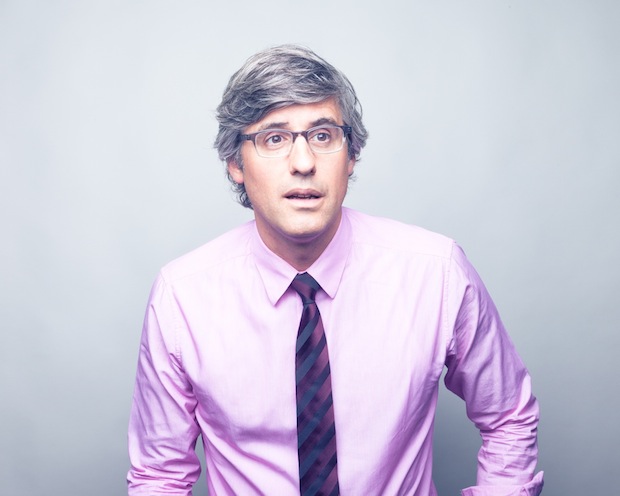 Today I chat with a man whose voice you’re probably familiar with if you’re a regular NPR listener, as he’s a frequent panelist on Wait, Wait...Don’t Tell Me!

Also a former Daily Show correspondent, he’s now contributing his corresponding talents to CBS News Sunday Morning. Recently, he starred in the documentary Electoral Dysfunction, which looks at how much there is to know and not-know about the Electoral College. If that weren’t enough, he’s also got a Cooking Channel show called My Grandmother's Ravioli, as he learns to cook from this country’s fine crop of grandparents.

Who have been some of the guests to call in for “Not My Job” on WWDTM that you felt starstruck by?
Well Dick Van Dyke was just the best.  When he sang the lyrics to The Dick Van Dyke Show theme (who knew there were words?!), we were all beyond thrilled.  Those 45 seconds were maybe the most exciting 45 seconds of my career -- and I was just listening.

If your grandchildren cooked with you one day, what recipe do you think would be most pleasant or meaningful to make with them?
Probably my own grandmother's ravioli -- and that's not just a plug for my show (Cooking Channel, Wednesdays at 8:30 p.m. ET).  My grandmother was an amazing lady.  She worked full-time at a downtown DC department store (in the china and crystal dept) until she was 87.  She would often walk to and from work, about 3 miles. No kidding.  And she insisted on making these gargantuan holiday meals for us.  (My own mother worked hard and cooked for us all week so she needed a break.)  Making the ravioli (big handmade pasta envelopes filled with ground beef, spinach and garlic -- really pretty simple), with a light tomato sauce, would be a great way to keep her memory alive.  And they're delicious.

What are some of the Rocca family holiday-time culinary traditions?
Lots of pies.  Lemon meringue, apple, cherry, pumpkin.

What’s the best thing you’ve eaten recently?
My romantic life has been scandalously quiet recently.  The duck poutine I had at Bistro Six-One in Niagara-on-the-Lake, Ontario (I was there doing a story on the Canadian perspective on the War of 1812) made up for that.  It was so good, it sent me to another place.  Honestly I didn't know what was happening to me.  Every one of my chakras was in overdrive. (Please note, I do not know what chakras are.)  I only wish Rob Reiner's mother had been there to witness the scene.

What are some of the most surprising things you learned during the making of Electoral Dysfunction?
We don't have a constitutionally enshrined affirmative right to vote.  And that's not just some quirky factoid.  It's the root of the very confusing and costly and chaotic way that elections are run in this country.  And it continues to corrode our confidence in democracy.

Also, people who make documentaries are people of deep faith in the value of content over flash.  They have to believe in what they're making to see their projects through years of struggle.  I am lucky to have worked with Bennett Singer (from Chicago!), David DesChamps and Leslie Farrell.

You have a background in musical theater; what’s a favorite old show of yours you think is underrated that you’d love to see revived on a major stage?
Gee whiz, everything has been revived at least a couple times by now.  I don't know the book of Anyone Can Whistle (and maybe that's the problem) but the score is so great.  I'd like to see that.  I'm also curious to see if they can ever get Funny Girl back to Broadway.  Streisand was so outsized by the time she did it at the ripe old age of 21.  I think it would be great to see it with revived with someone who's equally larger than life (if that's possible).  Maybe Lady Gaga as Fanny Brice?  (She could also play lead in Bells Are Ringing - what a score! - in the Judy Holliday role.  I'm stealing that idea from my good friend Gerard Alessandrini, creator of Forbidden Broadway.)

Typically, what’s the first step you take when researching your interview subjects?
Read anything I can about them.  If I'm doing a profile, I don't shy away from watching interviews of them on YouTube.  I hate to resort to this, but if they're giving me nothing I'll go to stories I know they've told before, if only to loosen them up.

Do you have any tricks on how to improve the situation when a subject is being unfriendly, taciturn or just plain boring?
Change the subject abruptly.  Philip Seymour Hoffman is a difficult interview.  (If I ever meet him again, I'll tell him -- and I mean this in a totally non-snarky way -- that he should not be giving interviews.  He's one of the few actors who doesn't need to.  He's that good at acting.  The work speaks for itself.  Giving an interview is apparently painful for him ... and it's ain't a picnic for the interviewer.)  Anyway, out of the blue, I said "You know who's terrific? Laura Linney!"  Of course she is terrific.  And Hoffman smiled and really loosened up for a bit.  I think he was happy to talk about someone else and he appreciated the spontaneity.  Or maybe it just surprised him.

Who are some dream interview subjects of yours?
Oh heck, why deny it, Streisand.  But I wouldn't let her know it's a dream.  That would irritate her.  Of course I wouldn't act like it's a chore.  I'd find a balance.  (Yes, I've rehearsed the interview 50 times.  Just me and a chair a la Clint at the RNC.)

What’s the most difficult part about writing for children’s television?
Keeping everything moving.  You can't mark time or tread water, like you can in grown-up entertainment. Kids are too smart.  They'll get instantly distracted if the story isn't moving forward.  Writing for them is the best exercise in learning how to write dynamically.

If you wrote a new book, what do you think it would be about? Would you return to humor/satire or do something a little more straightforward?
I want to do more history.  I want it to be funny.  Maybe more naturally funny.  Less high-concept.  (Helen Thomas as a turkey buzzard who had an affair with Millard Fillmore qualifies as high-concept, yes?)

How does it feel to be the 336th person interviewed for Zulkey.com/WBEZ?
That's the area code for Winston-Salem, NC where I spent two of the best summers of my life, studying acting at the North Carolina School of the Arts.  I'll always be grateful to my parents for sending me there and the teachers who taught me (sorry I never lost my lisp!) and the friends I made, including Lisa Anderson (who lives in Greensboro, also 336!) and Parker Posey, who has gone on to have a spectacular career!