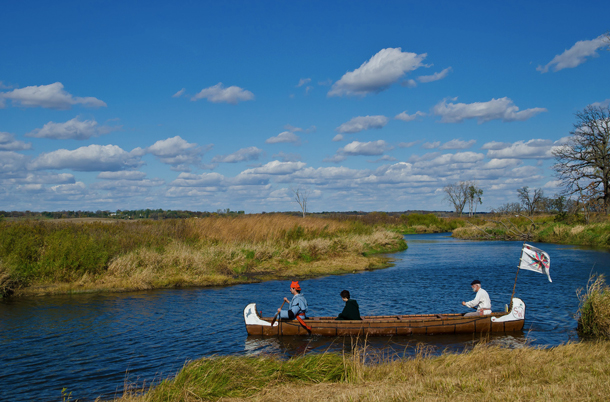 Before European settlement, Illinois was at the fountainhead of a great Midwestern oak savanna that stretched west through Iowa and south to the Gulf of Mexico. Less than one percent of that remains today.

In 19th century McHenry County, like much of Northeastern Illinois, oaks dominated the forest canopy, making up 98 percent of trees in the area. Efforts to restore oak savannas in the suburban ring around Chicago are growing, but ecologists are encountering some unexpected issues.

“Ecological restoration spent its first 20 years just trying to control invasive species, and that’s still the biggest job we have to do,” said Tom Simpson, a field station ecologist with the McHenry County Conservation District. “But more restorationists are turning their attention to oaks.”

Oaks are a keystone species in the region’s savannas and woodlands — they structure the ecosystem, nourishing the food chain and encouraging insect diversity. But they don’t make many seedlings, even when other elements of the oak savanna are restored.

At first most ecologists chalked the oak reproduction problem up to light availability. Oaks in many of the region’s natural areas are shaded out by invasive species like buckthorn. Simpson’s research over the past four years, however, showed light availability didn’t tell the whole story. Despite producing plenty of acorns near grassy areas cleared of invasives, oaks weren’t taking off.

Holding back the mighty oak could be lowly rodents. Simpson looked at squirrels, white-footed mice and meadow voles — major acorn-consumers — in McHenry County’s Glacial Park. Unlike the other two species, squirrels are critical to the lifecycle of oaks because of their tendency to bury acorns. Squirrels avoid certain open, grassy landscapes where mice populations are high, which could explain why oak seedlings aren’t expanding into prairies and grassy savannas as expected.

“It’s a question you wouldn’t ask until you try to restore the ecosystem,” Simpson said. Exactly why mice and voles have apparently edged out squirrels, a species they have shared the ecosystem with for thousands of years, is unclear. As ecologists like Simpson continue to research that question, he said, it underscores the challenges restorationists face.

“Restoration brings us face-to-face with problems that we otherwise would never have seen," he said. "But, it also gives us the opportunity to find a solution.”