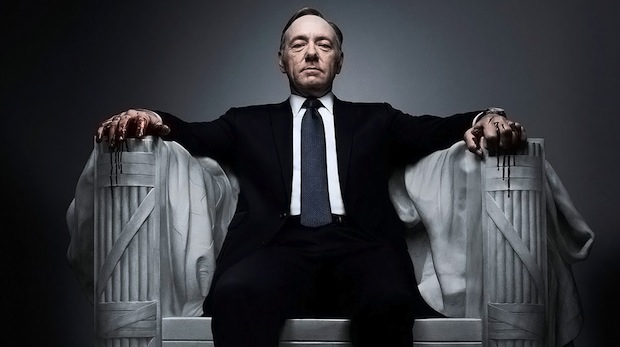 In the future – 20 years from now – we may look back on House of Cards as the show that changed television.
Instead of airing on an established cable network like HBO or AMC, the American political drama series (executive produced by David Fincher and starring Kevin Spacey, Robin Wright and Kate Mara) premiered its entire first season on February 1, 2013 via the streaming service Netflix. Subscribers could watch all 13 episodes in a row if they wanted, and many of them did.
Self-producing on Netflix turned out to a brilliant move for House of Cards, prompting popular media to wonder: will this novel experiment soon become the norm?
The idea of "binge-watching" a series is nothing new (see Portlandia's Battlestar Galactica sketch) but we used to have to wait until the DVD boxsets of our favorite shows came out before we could devour a season (or ten) in one sitting. Releasing an entire new season at once, however, allows the viewer to watch episodes at their own pace, without having to wait for the next one to arrive. According to House of Cards showrunner Beau Willimon, this bundled style of distribution is the way of the future:

"It's fully in the audiences hands to decide what their own experience is," Willimon says, "The same way that you read a novel. You can read Anna Karenina in two days, or you can read it over a year. And I think that's better because it personalizes the experience."

In a culture that wants everything fast and right now, this strategy of "personalized viewing" has caught on like wildfire. Netflix, once struggling from the loss of subscribers after much-maligned fee hikes, doubled its stock this year and sailed its way back into patrons' good graces. In addition to House of Cards and the Eli Roth werewolf saga Hemlock premiering in April, Netflix has acquired a much-hyped reboot of Arrested Development, the quirky family sitcom cancelled by Fox in 2006 and now prepping for a brand new season. Netflix will release all 14 episodes simultaneously in May, with a possible big-screen adaptation to follow.
Not to be outdone by Netflix revolutionizing television, other streaming sites like YouTube and HuluPlus have developed their own self-produced programming to draw TV viewers online. Hulu has three original series lined up for this summer (The Awesomes, The Wrong Mans and Behind the Mask), YouTube will soon begin charging $1 to $5 per month for premium content and DirectTV is banking on a House of Cards-like hit with its new original series Rogue, which stars Thandie Newton and debuts April 3.
Meanwhile, ratings continue to plummet for traditionally broadcast network and cable series, including zeitgest-y fan favorites like Girls, Breaking Bad and Parks and Recreation. But when most of these shows are available to stream on HBOGo, Hulu and other less-legal (but oft-frequented) bit torrent sites, one can see why so many people are cutting off their cable providers and turning to their computer screens instead.
Viewers will continue syncing their laptops to their HD screens in order to best absorb the gore of The Walking Dead and the glamour of Mad Men, but television channels as we know them may become obselete in the next few years. Instead, audiences will clamor for more instantly-accessible content, and TV providers will go online to keep them satisfied.
How do you watch your favorite shows? Do you think that web series are the way of the future? Leave a comment below, send me a tweet @leahkpickett or join the conversation on Facebook.