Skip to main content
Craig Scanlon from Chicago's Ravenswood neighborhood noticed something odd about a couple of the city's sports teams. One: The Bears and the Cubs are awfully similar mascots. Two: Are there even any bears in Chicago? Seeking some clarity, he asked Curious City this question:
What are the origins of Chicago’s professional sports mascots?
In the true spirit of sportsmanship, we asked a team of WBEZ producers to take on Craig's question. And we start with Benny the Bull.
Bulls mascot - Benny the Bull 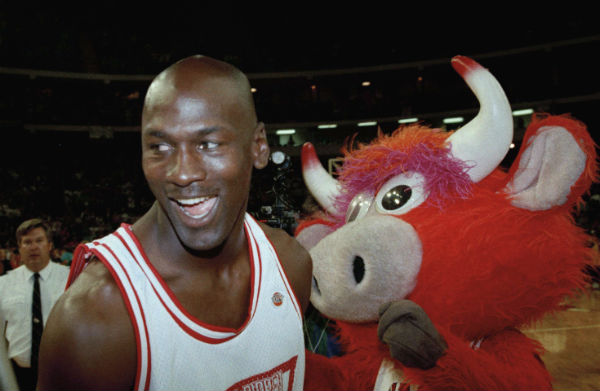 Despite becoming one of the league’s most successful franchises, the Chicago Bulls took some time—and some sweet talk—to get running.

The Bulls were the fourth attempt to establish an NBA team in Chicago. First there was the Stags…then, if you can believe it, the Chicago Packers and lastly, and ever-so-briefly, the Chicago Zephyrs. According to Bulls lore (and The Chicago Bulls Encyclopedia), the club’s first owner, Richard Klein, wanted the team’s name to reflect strength and power and the city’s reputation as Hog Butcher for the World.

“At first,” Klein explained at the time, “I was thinking of names like Matadors or Toreadors, but if you think about it, no team with as many as three syllables in its nickname has ever had much success except for the Canadians. I was sitting around the house, kicking these names around with my wife and three sons, when my little son Mark said, ‘Dad, that’s a bunch of bull!’ I said, ‘That’s it! We’ll call them the Bulls!’ And that’s how the team got its nickname.”

The team’s mascot required more hot air than that. After the few other failed attempts to bring pro basketball to Chicago, the city’s sports fans—and writers—weren’t interested. So the Bulls brought on a former big-time fight announcer to be the team’s public relations man. Ben Bentley, affectionately known to the boxing world and beyond as “Benny,” said he used to struggle to give tickets away in the early days; he used to turn up daily at Chicago’s four newspapers to talk up the team and hand out tickets. His thought was, if he got them in the seats, he’d make sure they had a reason to come back for more. One time, he wrestled a bear at half time to get people talking!

And so, the team’s original hype man lives on in its luv-a-bull mascot, Benny the Bull.
-Katie O'Brien
Blackhawks mascot - Tommy Hawk 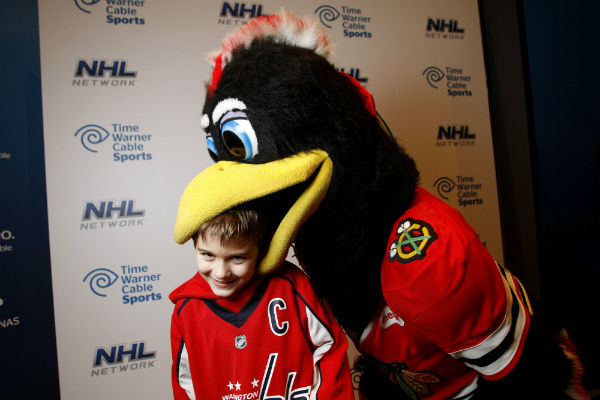 The Blackhawks are named so in honor of a the 19th-century Sauk Indian warrior, Black Hawk. His tribe made their home along Illinois’s Rock River. He began his quest to keep that land for his people as a teenager—and did so well into his 60s. After tribes in the region signed over lands east of the Mississippi River to the federal government, Black Hawk led a rebellion. He and some 1,500 followers—500 warriors and 1,000 women and children—on a 15-week campaign which caused panic in the area. Ultimately, Black Hawk was captured and most of his followers were killed.
It was his captors that turned him into a mascot of sorts. He was taken to Washington, where he met with President Andrew Jackson. Black Hawk became a media sensation, the symbol of resistance and rebellion, strength and resilience.

When the team’s founder, Major Frederic McLaughlin, he drew inspiration from his time serving as an Army commander in WWI. His division called themselves the Black Hawks in honor of the warrior.

Beth Carvey, directs the museum at Black Hawk State Historic Site in Rock Island. She said Black Hawk believed in fighting for his people and doing what was right by his people, even if it was a lost cause.
The Blackhawks introduced Tommy Hawk, a hawk clad in a Blackhawk's jersey and pants and sporting the four feathers of the logo on his head, in the 2001-2002 season.
-Katie O'Brien
Bears mascot - Staley 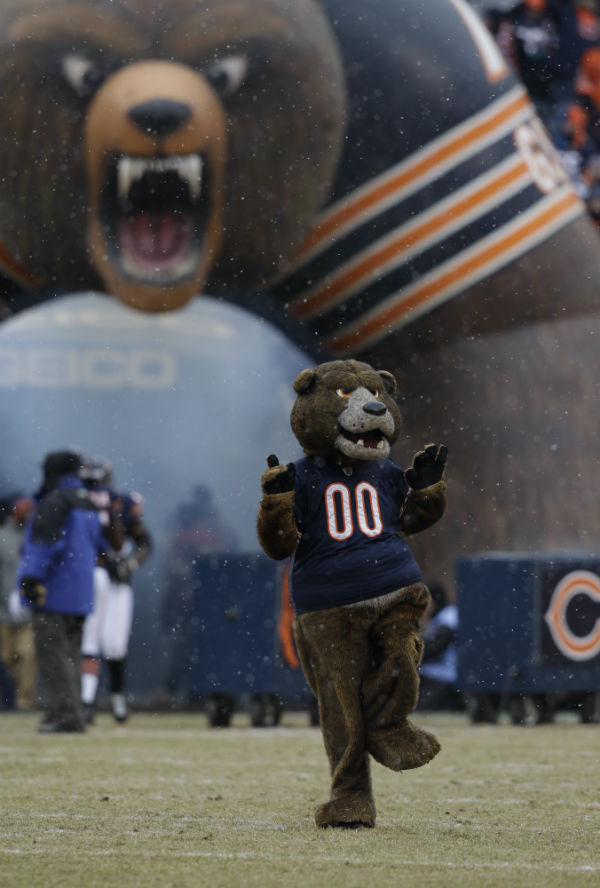 George Halas, one of the founding fathers of the NFL, didn’t first start with the name Bears for his original franchise. The team began playing in 1919 in Decatur, Illinois and was known as the Decatur Staleys since it was a owned by the A.E. Staley food starch company.

Halas took over the club in 1920 and moved the team to Chicago in 1921. According to the present team chairman, George McCaskey (and Halas grandson), the team had to keep the name Staleys for one year after they moved to Chicago, while they played at Wrigley Field.  Halas thought about naming his Chicago team, the Cubs, but thought football players were tougher and decided to anoint them as the Chicago Bears.

The team in recent years has had a kid-friendly team mascot that is a huge, almost cuddly bear, named Staley. His name was to honor the original team's name and also the hope that the name may inspire children to seek the history.

The Chicago White Sox installed “Southpaw” as their U.S. Cellular Field mascot in 2002. The green, lizard-like character’s name references left-handed pitchers and the ball club's location on Chicago’s South Side. But you have to go back decades to get a taste of some of the mascot controversy that has embroiled the White Sox over the years . Andy the Clown was Andy Rozdilsky dressed in clown makeup, a bowler hat, glasses and a ruffled collared polka-dotted costume. For over 20 year he would run around the park inciting shouts of “Gooooo yooooouuuuu White Sox” from children and adults alike as the unofficial mascot of the Chicago White Sox. Rozdilsky clowned around Comiskey Park from 1961-1981, until Jerry Reinsdorf’s ownership group bought the team. 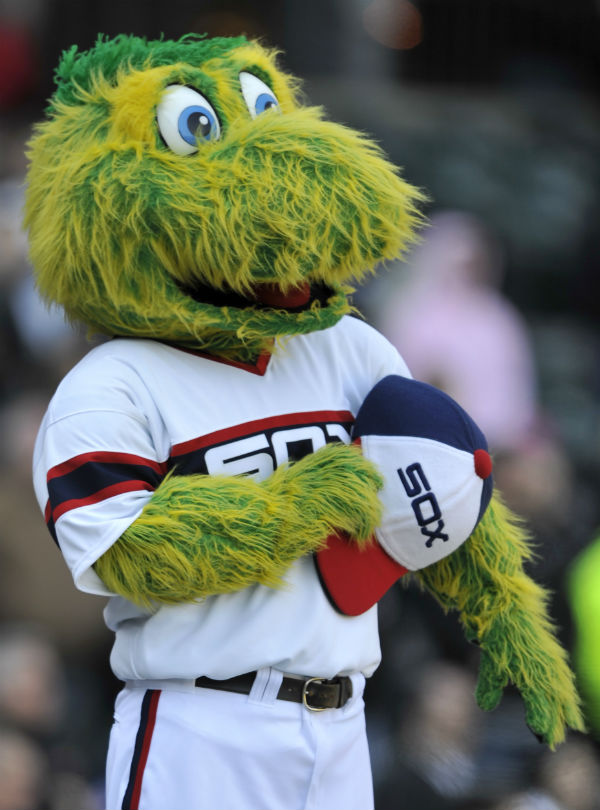 Reinsdorf hired a design firm to come up with a new mascot for the White Sox in an effort to keep up with the times, and plushy dinosaurs, chickens and other assorted abstract animals were all the rage.

White Sox management introduced Ribbie and Roobarb, two almost inexplicably strange characters in 1981, but they were instantly unpopular as fans overwhelmingly rebelled against them, hurling insults, mock fighting and spitting on the duo. Fans waged a phone-in campaign to have the White Sox reinstate Andy, who had been banned from the park (while wearing his costume). Eventually the club compromised, saying Rozdilsky could continue to perform in the upper decks only, but fans would go out of their way to sneak Andy into the lower grandstands.

When the Sox moved to the new Comiskey Park, the White Sox officially retired Andy the Clown, and Rozdilsky retired from clowning (in costume) a few short years before he passed away in 1995. 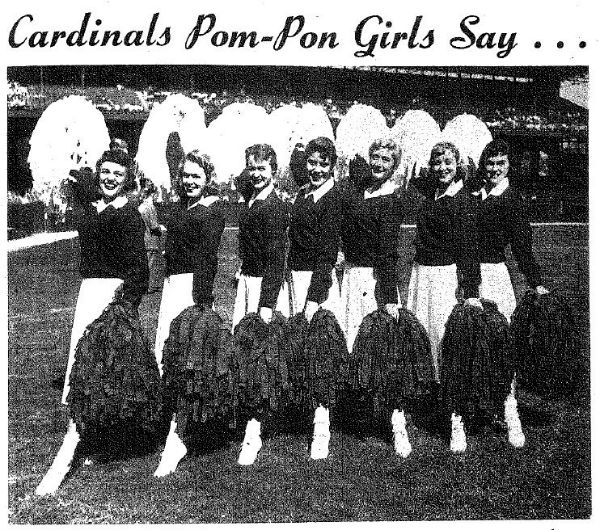 Chicago’s pro-football stepchild, the Chicago Cardinals, which became the St. Louis Cardinals, which became the Arizona Cardinals, didn’t have an official mascot, according to sources with the team as well as at the Pro Football Hall of Fame and the Chicago History Museum, but in the 1940s & 50s they had the "Pom-Pon Girls,” the team’s "official vocalist, Gary Mann" who sang the National Anthem, and the Cardettes, a " 30-girl twirling and precision group."

The Cardinals played in Chicago until 1960, when for the sake of its financial survival, the team moved to St. Louis.

The team’s origins go back to 1898 when owner Chris O'Brien formed the Morgan Athletic Club. Some years later, he bought used jerseys from the University of Chicago. Because the jerseys were old and used, they lacked the University’s deep maroon color and were a strange faded red. O’Brien decided the jerseys were “Cardinal Red”. The new “Cardinals” started playing their games on Chicago’s South Side at 61st and Racine. They were known then as the “Racine Street Cardinals”.

Special thanks to Jon Kendle of the Pro Football Hall of Fame, Lesley Martin of the Chicago History Museum and Allison LeClair of the NFL's Arizona Cardinals.

The Chicago Cubs are one of four teams (Angels, Cubs, Yankees and Dodgers) with no official mascot. However, with the new 5-year, $300 million expansion plan for Wrigley Field, the club has reportedly partnered with Northwestern University to conduct a poll about what kid-friendly experiences to add to the ballpark. Among those items discussed, an official mascot, according to the Chicago Tribune. 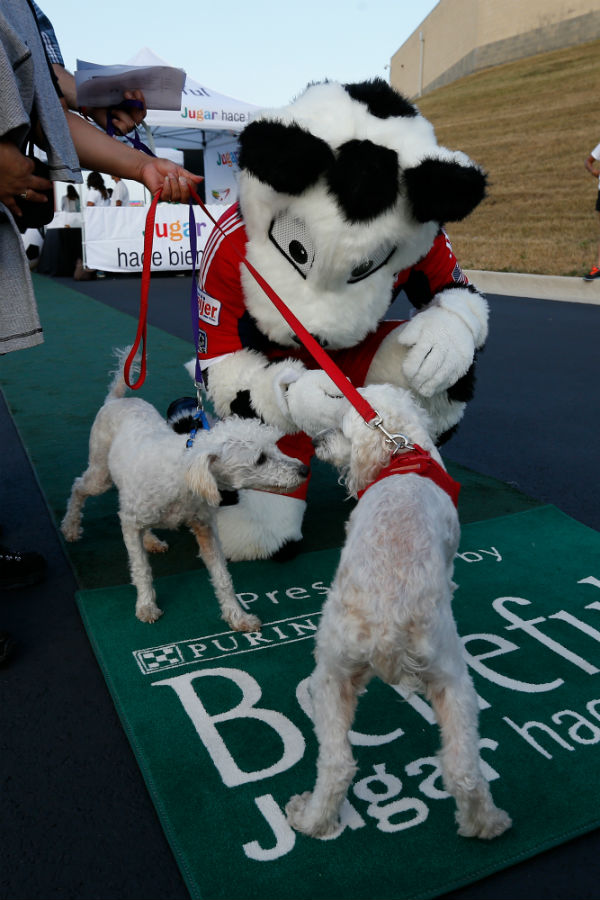 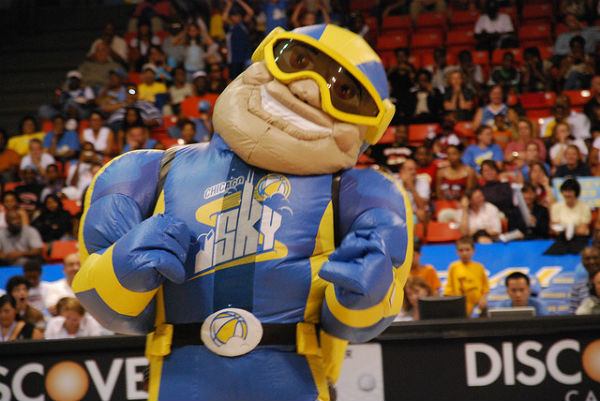 Sky Guy is a yellow and blue-suited sky diver with a jet pack. Sky Guy has been the official mascot since the Chicago Sky became an offiicial WNBA team in 2006.