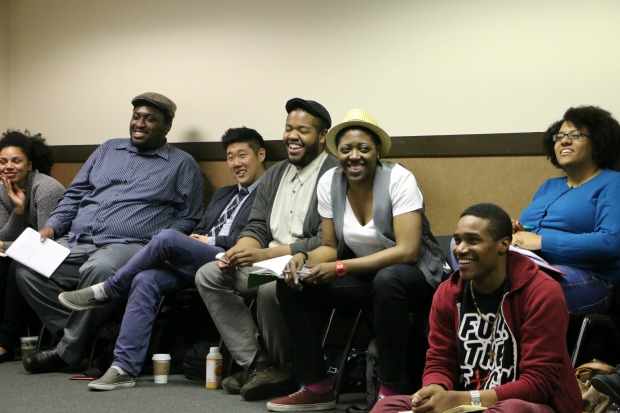 Craig Ferguson of The Late Late Show is expected to sign off at the end of the year.

This news comes just after the network announced Stephen Colbert will replace the retiring David Letterman.

The announcement raised questions again about why all the networks' late night comics are white males.

Part of the answer takes us to Chicago, where many of the comedy stars of the last few decades learned their trade – including Stephen Colbert who studied improv at The Second City.

While some inroads have been made, comedy is still seen as a predominantly white male art form. Particularly when it comes to the art of improvisation and sketch comedy.

Improvisation was founded in 1955 at the University of Chicago and since then it has been slow to transition to an art form that is available to the masses.

While efforts have been made to be more inclusive of women, the LGBT community, and actors of color, there is still a lot of work to do.

Diversity is an issue that big improv institutions are keenly aware of.

Andrew Alexander, CEO, of the Second City has been grappling with this for the last 20 years.

He said he noticed the problem back in 1992.

“I was in Los Angeles during the L.A. riots and I happened to fly back one of those evenings and I came to Chicago and I went straight to the theater," Alexander said. "And our actors were 6 or 7 white actors who were struggling to figure out how to sort of deal with the riots in L.A. and it became quite apparent to me that the point of view just wasn’t strong. And from that moment on I made a decision to really embrace how can we improve our diversity.”

But, more than two decades later, there is only one person of color on the main stage at Second City.

Anne Libera, director of Comedy Studies at Columbia College and an instructor at the Second City Training Center said it’s difficult to cultivate diversity in general.

For the first time in the history of the Second City, a special fellowship was created this year named after Bob Curry, the first African American to perform on The Second City’s mainstage in 1966.

The fellowship is an intense training program that has accepted only 16 minority students who already have some experience on stage.

The goal is to mold them into exactly what the Second City is looking for.

Matt Hovde, the artistic director at the Second City Training Center, said he’s confident this program will open the door for more voices.

“It’s the first time in a long time that I feel like it will directly translate into a bigger pool of diverse talent at Second City that are working and can work," Hovde said. "So to me it’s a great leap forward.”

One of the Bob Curry Fellows, Patrick Rowland, is also a member of 3Peat, an all black improv team that plays weekly at iO, another comedy institution.

Rowland said when he took classes back in 2006 he was always the odd man out.

“Every class I was in I was the only black person or person of color," Rowland said. "There was a tall lanky white guy, a chubby white guy, a white girl who thought she was Tina Fey and then there was me.”

Rowland said that since then, he has seen some changes.

“Nowadays...it’s not a lot but to me it’s like an explosion of black people," Rowland said. "And by explosion I mean that you you can count them on two hands.”

“The dominant voices you see in the media, if you’re like a black actor in movies or television, you’re gonna be the guy who’s always the black guy and not just the guy. You don’t see a lot of black protagonists in movies. And that’s something that can be really inspiring to people coming up. Because I know I don’t personally see a lot of people who look like me in the media, telling a story similar to mine. And that’s why I like especially playing with this group because when you walk into a scene you know you’re not going to be just a black guy. You’re just going to be another improviser on stage which is refreshing.”

Thibodeaux and the other members of 3Peat agree that in order for more minorities to get involved, they have to pave the way.

Which is something I’m also now aware of.

I wrote a blackout sketch for my conservatory graduation show at the Second City Training Center that satirized being a Muslim woman and a person’s fear that I was going to blow them up.

I was playing off a stereotype and people laughed.

But it’s not always funny.

I was once in a class where the instructor thought it would be amazing if I came out on stage with an American flag and Indian music playing in the background.

I was confused, because I’m not Indian.

Stereotypes are often another challenge for diverse performers.

3Peat member Nnamdi Ngwe is all too familiar with this and said he experienced it during an improv class.

“I was actually told, in one of my classes, can you blacken it up," Ngwe said. "He didn’t use exactly those words, but he did want me to essentially blacken it up. I was like no thank you. I wanna do me.”

The process of diversification is complex. But there have been some gains.

The Second City’s smaller stage is now made up of half white and half minority actors.

But true diversity on the bigger stages promises to be a long term project made more difficult by the fact that it’s so competitive.

The Second City for example may have only one or two positions open in any given year.

Mariam Sobh is Midday Host and reporter at WBEZ. Follow her @mariamsobh