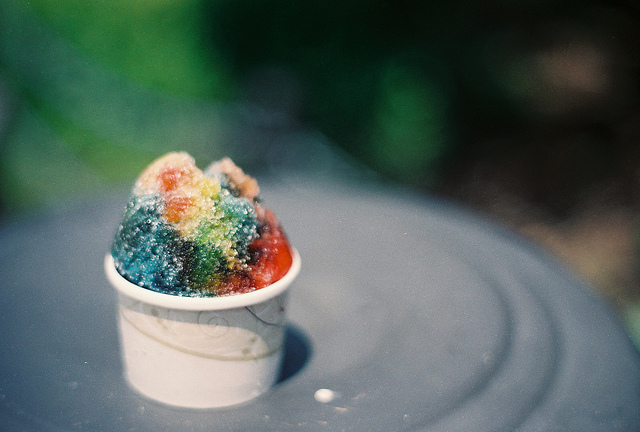 Summer was easy in childhood. For one, everything could be contained to one block. I spent many summers at my grandparents’ home in the Austin neighborhood while my parents worked during the day. As I got older, I began to spend more and more time inside, not because there was little to do outside, but because the containment of the block was no longer satisfactory. But as a child, it was easy to acquire as much of the goodness of summer in one block as it was to spend time moving from neighborhood to neighborhood and activity to activity.

I’m thinking about the women who put up snow cone stands. I can’t remember how much they cost (probably not a lot). What I do remember is how sticky and messy they were and how that seemed unique to summer as well. Summer is a time of cold, meltable treats. A sweet relief comes in the form of sticky fingers and a messiness that was more or less acceptable. As an adult, I still face that: the sloppiness of summer, the ways in which we are subject to the heat in all of its glory and frustration. We wait all winter and spring for the heat and then, when it arrives, we forget everything else that comes with it.

I’m thinking about barbecues as well. We are nearing the Fourth of July. Although Summer has technically just started, in our minds, it truly hits around Memorial Day. That is when the laziness of extra-long days feels acceptable. Barbecues are a means of indulgence in a manner that feels in opposition to the indulgence of winter holidays. For one, in summer, it feels easy to “keep going.” Once I stop eating during a holiday dinner, my relatives rarely question my actions. But in the summer, another plate can be found just waiting.

Summer is a time of being young. And if that is out of grasp, it is a time of feeling young, too. When I think about my favorite songs of summer, I remember my favorite films nd television shows about youth. These films might not have taken place in summer, but they successfully invoked the best feelings of being young, and so songs like Space’s “Female of the Species” (as heard in My Mad Fat Diary) or Supergrass’ “Alright” (as heard in Clueless), feel especially right for the right now.

And waiting too feels inherent to the spirit of the season. I sometimes forget that fall is quietly waiting. And so I too wait – in lines, in stores, at parties, for transportation – all for the chance to experience the things that were taken from us the other nine months of the year. What are those things? Maybe the sticky sweetness (like mentioned above) of gelato. A Sunday evening is sometimes spent waiting for a scoop or three of Black Dog Gelato, but it all feels worth it. Treats are available throughout the year, but warmth trumps deliciousness.

Maybe too I’ll wait for a party or performance in a way that seems unfeasible in the winter.

“I do NOT wait in lines,” I used to say to friends, not because I thought I deserved better treatment, but because the cold was too much to bear for a good time.

But in the summer evenings, when the breeze is just right, I can wait in line longer than expected, all for the sort of magic that only brews when the days and nights are equally enjoyable.