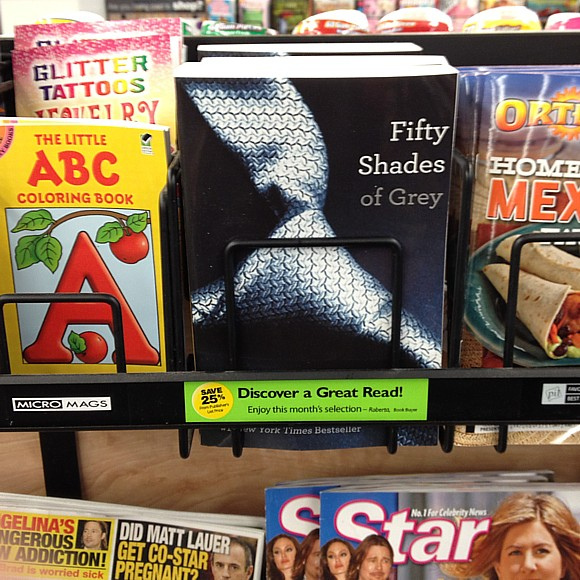 What is left to be said about Fifty Shades of Grey? So much has already been written about the romance novel that you'd think it had reinvented the ancient genre of erotica.

The novel centers around a submissive relationship, which would be fine, argues comedian Mel Evans, if it wasn't being taken by others as a metaphor for the way women should be perceived in society at large.

"It may hurt for a moment, but ultimately, men know better what we want. They know better than we know ourselves," said Evans, facetiously, at The Paper Machete. Read an excerpt below or listen above:

The Republicans are using a secret weapon in the war on women–which exists–and this one has infiltrated every home, and the life of almost every woman you know. I’m talking, of course, about Fifty Shades of Grey.

In case your mom hasn’t already gotten you up to speed, Fifty Shades of Grey is a “book,” and I’m using the term loosely, originally written as Twilight fan fiction. It follows the dramatically named billionaire Christian Grey and college student/virgin Anastasia Steele as they enter into a business agreement where she will become his submissive in his–and I’m using this term loosely too–BDSM extracurricular activities. And maybe, just maybe, they’ll fall in love along the way.

We are told repeatedly that Steele is beautiful and intriguing, but also clumsy, so she’s relatable to real women. And we’re told that Grey is beautiful in practically every sentence but also hates being touched, so he’s relatable to real men. These two beautiful people have vaguely kinky sex until they break up. The book’s enormous popularity is tied to the rise of the eReader, which allows women to read smut on the "L" in anonymity, and the rise of desperately unsatisfied wives and mothers, who have turned to this repetitive, unimaginative and poorly written “mommy porn” to revitalize their marriages.

This isn’t about saying domination is wrong, because if that’s your kink, go for it, especially if – SPOILER ALERT–that’s your cut and dry coping method with your control issues after a childhood of abuse and neglect, as is the case with Christian Grey. And this further isn’t to say that it’s wrong for middle-aged women to be getting their kicks reading erotica, because romance novels were the biggest share of the bookselling market in 2011, so this is nothing new. The issue here is that the domination in this case doesn’t stop in the boudoir–Christian Grey wants to dictate what his 22-year-old virgin conquest eats, how much she sleeps, what she wears, completely controlling her life.