Hundreds of people marched through the streets of El Cajon, Calif., on Wednesday night, protesting the police shooting of an unarmed black man on Tuesday.

A 911 caller had reported that her brother was acting erratically and walking into traffic. She told police that he was mentally ill and unarmed, Andrew Bowen of member station KPBS reports.

It took nearly an hour for police to arrive on the scene. About a minute after they arrived, one of them shot Alfred Olango, The Associated Press reports.

Police say Olango did not have a weapon, but was in a “shooting stance” pointing a vape at officers, an account witnesses dispute.

El Cajon police have been criticized for not sending a team specifically trained to deal with psychiatric emergencies; the department says they had a clinician in the field dealing with another call related to mental illness, and that that team was “not immediately available” for the call about Olango.

Cell phone footage of the shooting exists, but has not been made public. El Cajon Mayor Bill Wells, who has seen the video, said Wednesday it was “not tremendously complicated to figure out what happened” from the footage, the AP reports.

Asked how he would feel if it were his own child in the video, Wells said, “I saw a man who was distraught, and a man acting like he was in great pain. And I saw him get gunned down and killed. If he was my son, I would be devastated.”

The police department, the FBI and the district attorney are investigating the shooting, the AP reports, and the two officers involved are on administrative leave.

As the Two-Way previously reported, police say that after Olango pointed the object, one officer opted for nonlethal force, while another used a gun:

“After police arrived on the scene, Davis said, the man drew an ‘object’ from his pocket, ‘placed both hands together on it and extended it rapidly toward the officer, taking what appeared to be a shooting stance.’

“One officer on the scene discharged a Taser. Another officer — the one who ‘had the object pointed at him,’ Davis says — ‘simultaneously’ fired a gun, shooting the man several times.”

Police now say the object that alarmed officers was a “vape smoking device” with a 3-inch-long silver cylinder and a 4-inch-long box. 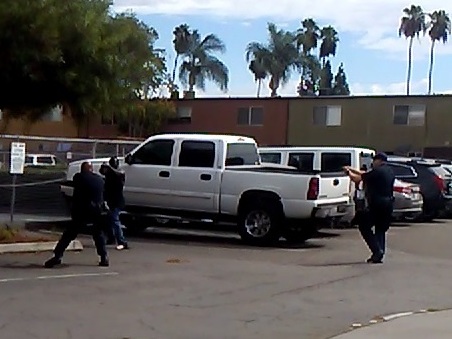 Police in El Cajon, Calif., provided this image, which they say is a still from a bystander’s cellphone video of the shooting of Alfred Olango on Tuesday. Police say the man was pointing an object — which turned out not to be a weapon — at an officer. El Cajon Police Department

Reuters reports that one of the officers on the scene had extensive mental health training. It was the other officer who shot and killed Olango, the wire service says.

Witnesses said they saw Olango’s hands in the air when he was shot, but police say the cellphone footage from a bystander corroborates the officers’ account of a “shooting stance.” They have released a still image from the video, but not the footage, which they say the bystander voluntarily turned over to police.

Several of the protesters on Wednesday called for the release of the full video. A lawyer for Olango’s family said police are “cherry-picking” from the video, the AP reports.

Videos of the immediate aftermath of the shooting, which don’t show the incident itself, were streamed online. One showed a woman who says she is Olango’s sister, mourning and distraught.

Protesters sit in front of a police line in El Cajon, a suburb of San Diego, Calif., on Wednesday night. Bill Wechter/AFP/Getty Images

At protests on Wednesday night, an El Cajon businessman told member station KPBS that the shooting goes past questions of justice. “This goes into the morality of humanity. Everybody ought to be conflicted about this,” he said. “Imagine if this was you.”

Another protester, local civil rights activist Estella Del Rios, said that El Cajon’s district attorney has never determined a police shooting was unjustified. She called for an outside investigation.

“This is a life,” Del Rios told KPBS. “A life that matters. And I just want to say we demand, as a community, a federal prosecution. We know there’s a photo out there that tells just one story, one side of the story. The family needs answers. They need it now.”

The AP has more on Wednesday night’s protests:

“After dark, scores of people gathered quietly around candles lining a curb in front of bloodstained pavement at the strip mall where Olango was shot.

“The spot in front of fast-food restaurant has become a makeshift altar with a mound of flowers.

“More than 200 people marched in the streets near the site, yelling ‘no justice, no peace, no racist police!’

“Police in riot gear, some of them with dogs, faced off with protesters occasionally, bringing some tense moments, but mostly kept their distance.

“There were no reports of any violence or arrests.”

Olango was a refugee from Uganda, the AP reports, who had a part-time job in a furniture store. He had a history of run-ins with the police, with convictions for selling cocaine, receiving stolen property and drunken driving. He had served time in federal prison for possessing a gun as a felon.

The lawyer representing Olango’s family told the AP that Olango was a loving father who was having an emotional breakdown after his best friend’s death.

The wire service also spoke to a woman named Agnes Hassan, originally from Sudan, who says she and Olango spent time in a refugee camp together. She described him as an educated man with mental problems, saying that both of them suffered in order to get to the U.S.

“This is not right,” she told the AP, wiping away tears. “My heart has just broken.”

The Washington Post reports that so far this year, 172 people experiencing a mental health crisis were shot and killed by police.

CorrectionSept. 29, 2016An earlier version of this post misidentified Alfred Olango as Andrew Olango.