A few weeks ago I wrote a thing about how my husband and I were yelling at our infant son out of frustration and exhaustion. And wouldn’t you know, after I published that piece calling him out for being a pain in the neck, he straightened up (somewhat). As much as I’d like to think that we scared him into being a better baby, however, it may just be time. 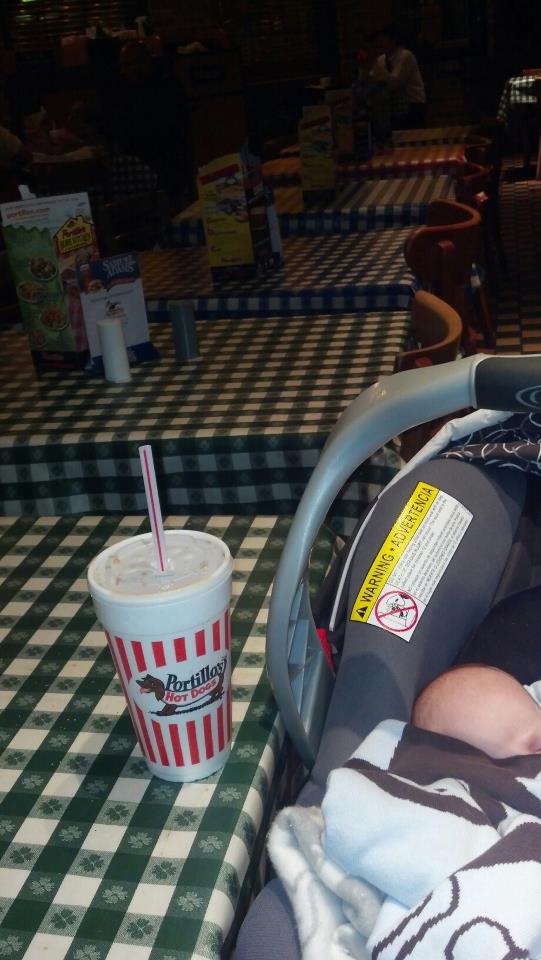 So if you’re a person who is doing the yelling-at-the-baby-thing right now, all I can say is that it gets better. That doesn’t make it any easier in the moment, because the moment can really suck, but it does happen. Once we hit that six week mark, the baby started sleeping a bit more predictably, opening his eyes more during daylight hours, at least doing a decent impression of a smile and just being a bit more like a human baby and not a screaming ol’ blob (describing a newborn baby as a “blob” may be the best thing that Angelina Jolie ever did, in my opinion).

Dealing with more of a proto-person and not a howling abyss of poo has helped me, anyway, enjoy maternity leave more. I was sure I must have been doing something wrong if maternity leave felt more simultaneously boring and overwhelming than enjoyable and special. How could I yearn to trade places with my working-like-a-dog husband if all I could say I did all day was take care of the baby, do laundry and dishes? With everything I had going for me — healthy baby, healthy self, nearby parents, bills paid (in Internet commentary speak this all adds up to “privilege,” I know) — how come I felt so exhausted and not at all like I was soaking up once-in-a-lifetime memories that I should cherish forever? Many of my friends with older children had told me that I should remember these moments because they missed them. So not only was I run-down, depressed and confused, I beat myself up for feeling that way.

I think now those friends didn’t actually miss the first month at all. I think they confused the later months of infancy (I hear that three months is the real sweet spot where babies are more interactive but not running around either breaking your stuff or getting broken by your stuff) with those first few weeks. Those first few weeks, it’s true, you are just surviving. And if you’re like me, you’re right that a lot of other people have it worse than you do. However, that doesn’t mean you’re obligated to feel great. Even under the best of circumstances, between taking care of a being that doesn’t know how to express what it needs and a body that requires some serious recovery (and a modern-gal mindset that can’t really accept this), it will be rough. Less rough than some is still rough.

There was a day a few weeks ago when I broke down because it all caught up with me: the exhaustion and boredom and guilt and doubt. “You should go out and do something for yourself,” a friend told me, and I panicked because I couldn’t think of what possibly that would be that would be practical and cost-effective that wouldn’t involve the baby. This seemed to encapsulate my problems (or lack thereof).

Eventually my body was my guide: later that day I cried and took a nap and cried some more and washed my face and talked to my husband and cried and washed my face again. I canceled my plans for the next day (when in doubt, parents of a newborn: CANCEL YOUR PLANS). The next day we took a long walk in the forest preserve and brought the baby along to Portillo’s for some Italian beef and I felt better.

Everyone needs that moment, I think, with a new baby: the crying-’til-you-get-a-sandwich moment. (Maybe for you it’s not a sandwich, but here the sandwich is a metaphor. I like my metaphor dry, personally, because I like to enjoy the bread.) I think once you find that moment, things start to turn a corner and you realize that you maybe can kind of do this. And the best part is, I know that a few weeks from now there’s another corner, maybe this time one that comes with a cookie or a soft cheese.