Marlon Frausto is in pursuit of the new American dream. Just a few weeks ago he left his job, in Hispanic marketing for the legal industry, and moved to San Francisco.

Every day he wakes at 5:30 a.m., commutes 45 minutes by train, and studies until 9 or 10 at night. He's spending down his savings and says he's getting help from "my loving family."

At age 26, Frausto has gone back to school. Sort of. He's enrolled in a brand-new kind of trade school: the immersive web-development program, also known as a "coder boot camp." These programs promise, for several thousand dollars, to take people like Frausto and, in a manner of weeks, turn them into job-ready web developers.

Virtually unknown just four years ago, today at least 50 of these programs have sprung up around the country and overseas. Collectively, the sector has taken in an estimated $73 million in tuition since 2011.

And the top programs say they are placing the vast majority of their graduates into jobs earning just under six figures in a rapidly expanding field — filling a need for practical, hands-on skills that traditional college programs, in many cases, don't.

"The main portion [that attracted me] was the empowerment — being able to create something in terms of technology," says Frausto, a slight man in a baseball cap with a mustache waxed straight out to sharp points. "That, and obtaining a trade."

Coder boot camps are poised to get much, much bigger. This past summer, Kaplan, one of the largest education companies, acquired Dev Bootcamp, where Frausto is enrolled. These programs constitute nothing less than a new business model for for-profit vocational education. But their creators believe their greatest innovation may actually be in the realm of learning itself.

"This was a chance to think about education in a very different way, and the way I think education should be," says Anne Spalding, the director of Dev Bootcamp in San Francisco.

Spalding left a tenured position as a computer science professor at Colorado Mesa University to take this job just under two years ago. Her new "campus" is a well-worn floor of offices in the South of Market neighborhood in San Francisco's central business district.

There's a space for daily yoga sessions for the 75-odd students, as required by the California vibe police. (Life coaches are also available, as are weekly sessions on social and emotional skills like empathy and giving and receiving feedback). There are rows of Macs everywhere and a kitchen where students keep bins of groceries — they're usually working straight through breakfast, lunch and dinner.

Spalding originally came to the city on sabbatical. She wound up helping with the very first cohort of Dev Bootcamp.

"The primary difference [from a university] is the intensity of the program," she says. That and the changed role of teachers, from being the "sole source of knowledge," she explains, "to creating a guided learning environment where knowledge comes from everyone and is shared by everyone."

So, how do these programs work? I spent an afternoon at the San Francisco site to find out.

Students have two quick lectures or Q&A sessions, one in the morning and one in the afternoon, that focus on teaching them how to teach themselves. I heard one lecturer explain to brand-new students how to debug a program by Googling for help.

Each lecture is followed by a coding challenge. Usually this is completed through a method called "pair programming", a common industry practice where two programmers share duplicate screens, correcting each others' mistakes as they go. In the final weeks, students propose and build a project. Then they spend a career week" working on their portfolios and interviewing skills.

Frausto is in the third three-week module of the program. On the day that I visit he is paired with Murat Gocmen, 35, originally from Turkey. The two of them are tasked with building a "clone" of a web site called Stack Overflow — a question-and-answer site where users can submit answers and vote them up or down.

The two students put a yellow Post-it note atop their monitor, signaling that they're stuck. A teacher, another student or a paid alumni mentor may come around to assist.

"Practice and theory are one and the same here," Frausto says. "I just thought it was a very integrated approach to education that isn't available anywhere else."

Coder boot camps arose as an elegant solution to a problem of supply and demand.

This is one of the fastest-growing areas of the job market, and average salaries are high: from $62,500 for a web developer to $93,350 for a software developer, and even higher in competitive cities like San Francisco. Outside the traditional tech fields, a basic familiarity with code is helpful in design, journalism, education, marketing, business, finance, scientific research, and many more.

At the same time, in just the past five years, the nature of coding itself has changed. Programming languages like JavaScript and Ruby, essential for websites and web browser-based applications, are evolving to be increasingly powerful, even for novices.

When you compare today's toolkits, frameworks, and scripts to the earlier days of programming, it's like the difference between hand-carving a set of wooden blocks to build a model house, and snapping together some Legos.

It's that technological progress that makes it plausible, just barely, for these programs to advertise that, in just 10 to 19 weeks: "We are teaching them enough to be able to get a job and get paid to keep learning," in Spalding's words.

Patrick Sarnacke has hired many Dev Bootcamp and other "boot camp" graduates at ThoughtWorks. It's a global software consultancy headquartered in Chicago and Sarnacke is head of the associate consultant program.

"Just because someone has a four-year computer science degree doesn't mean they're going to be great coders in the business world," he says. "A lot of traditional programs aren't teaching the skills people need."

On the other hand, Sarnacke says, "The boot camps cut right to the chase." While graduates generally have some weaknesses in the area of computer-science theory, "They have experience. They know the engineering practices and the software methodologies that we use." 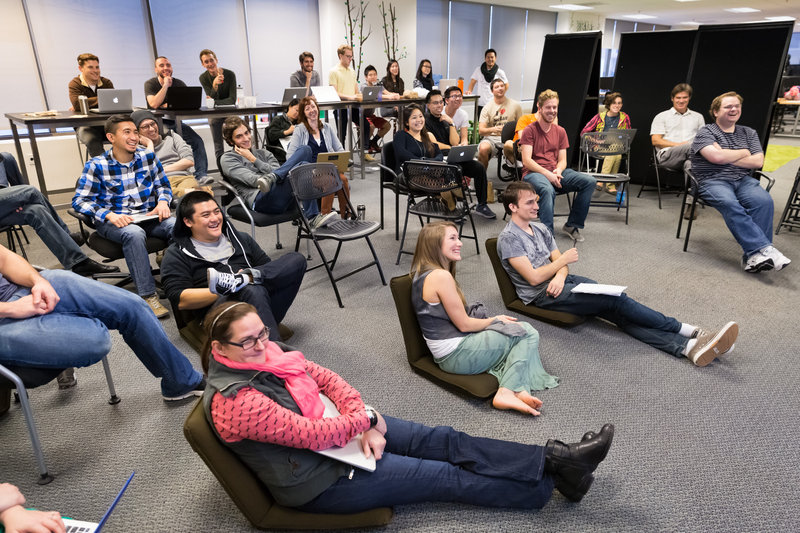 There are as many different ways to learn coding today as there are people who want to study it: free online tutorials like Codecademy; paid online communities like Treehouse; nonprofit, in-person mentoring groups like Black Girls Code; and of course traditional and online university programs.

The coder boot camp is a hybrid of all of these that sprang up almost by accident. In the beginning of 2011, entrepreneur Shereef Bishay was teaching one of his best friends how to code. He thought it would be more fun in a group, so he posted on an online community called HackerNews that he was thinking of holding a 10-week intensive training to share what he knew about programming.

In the first week he had over 200 applications, and Dev Bootcamp was off and running in San Francisco. They've since expanded to Chicago and New York. At about the same time, General Assembly, a co-working space in downtown Manhattan founded in 2010, began adding evening classes and workshops in design, technology, and entrepreneurship. In response to requests, they introduced their own full-time immersive web development program, which now has locations in Sydney, Melbourne and Hong Kong.

These programs tend to claim that nine out of 10 of their graduates get hired, with starting salaries between $75,000 and $110,000. It's difficult to independently verify these numbers.

In exchange, Dev Bootcamp charges $12,200. General Assembly's Web Development Immersive is $11,500. And don't go looking for a Pell Grant or even a student loan. Coder boot camps are not accredited by any federal or state education agency, and they're not interested in doing so. They will vouch that you've successfully completed the program, but that's it.

"We're not selling a degree. We're selling an experience, a job, and access to our community," says Jake Schwartz, co-founder of General Assembly. (General Assembly has begun work on a set of alternative credentials that it hopes will be recognized by industry partners like GE.)

In January, a division of the California Office of Consumer Affairs that regulates trade schools warned General Assembly and several other boot camps that they could face fines up of to $50,000 and a shutdown if they didn't come into compliance with the regulations that govern such schools.

But Schwartz says the state was asking for little more than basic measures, like an enrollment agreement that clearly discloses all terms of the program. "At the end of the day their goal is not regulating what we teach, it's consumer protection, which we are very much in favor of."

Somewhat paradoxically, Schwartz argues that this lack of regulation is part of what keeps his business honest, and sets it apart from the bulk of the for-profit education industry.

"The problem with for-profits has been that they evolved to become machines for gobs of Title IV funding," he says, referring to the category that covers federal higher-education aid. Indeed, for-profit technical schools get as much as 90 percent of their money from these sources. In response to increased regulatory pressure and bad publicity, enrollment across the sector has fallen sharply in recent years.

By contrast, at a coder boot camp, students are paying out of pocket, which should in theory make them more attentive to the question of return on investment. "Our students are taking on a significant risk here," says Spalding. "They're looking to change their lives."

Boot camps demand a full-time, if short, commitment, and offer few scholarships (Dev Bootcamp has a $500 discount for veterans, minorities and women). That makes them more elite than, say, a community college or typical online program.

Participants tend to have resources, and at least some college and work experience. They are not much more diverse than the predominantly white, male tech workforce in general.

The application process for Dev Bootcamp is similar to a job application, and people complete a 9-week, part-time introduction online before they come to campus. And, Dev Bootcamp says, about 95 percent complete the program — that includes those who repeat the first six weeks, which you can do for free.

All this helps explain their stellar reported job-placement rates. But it also would seem to place a limit on growth.

Thumbs Up / Thumbs Down

"I quit my job, emptied my bank account and essentially abandoned my family for almost three months pursuing my education at Dev Bootcamp. All of this for training which was far less effective than the website made it out to be, and a promised career as a developer which has yet to materialize, and I don't expect will ever materialize," wrote a user named "ingbird" on a site called techendo.com.

"It's really the Wild Wild West of education," says Dan Gailey. He started techendo to collect independent reviews of boot camps after being unable to get verifiable information on job-placement rates from the schools themselves. "Some people really loved [their experience], and learned a lot. Some people don't. They feel like they were taken."

The top coder boot camps have lots of happy graduates too.

Laura Mead graduated from UCLA in June 2013 as an English major and went to Dev Bootcamp that fall. As she was completing the program, she was recruited by the sales software company Salesforce; and a few weeks ago, Twitter hired her away from there, into a six-figure engineering position.

"I'm not afraid to say I can learn whatever you need me to learn," says the 23-year-old. "That's the way a lot of DBC people get hired."