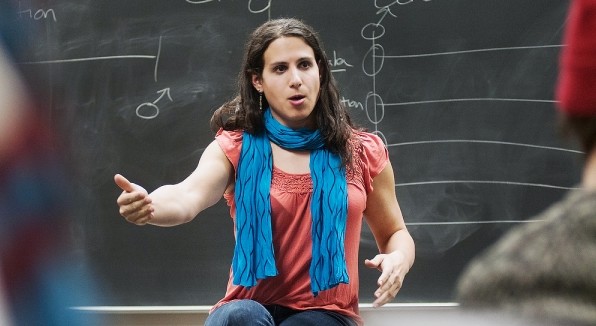 This month marked a historic first for the trans* community. March boasted the inaugural National Month of Action for Transgender Healthcare, a campaign co-sponsored by groups as diverse as Pride at Work, the Transgender Law Center, Basic Rights Oregon and the National Center for Transgender Equality. Our first “Trans* Month of Action” has seen events in San Francisco, Oregon and now Chicago, as trans* community organizer Rebecca Kling has worked with Erica Mott, Paul Escriva, Dion Walton and Hale Thompson to bring conversations on LGBT community health to the University of Illinois at Chicago.

Held at the UIC Division of Community Health Sciences, the Open Forum on “Health, Healthcare and the Trans* Community” focuses on two central questions: “What issues do trans people face in navigating their health care? And how can the health of the trans community, as broadly defined, be improved?”

A 2011 survey from the National Gay and Lesbian Task Force outlined the problems facing the trans* community in regards to obtaining health care services. Their statistics stated that 19 percent of gender non-conforming and trans* people are denied access to health care outright, whereas another 28 percent “postpone medical care because of fear of discrimination.” According to In Our Words,

“Key findings also reveal that respondents experienced double the rate of unemployment as the general population; near universal harassment on the job; significant losses of jobs and careers; and higher rates of poverty. Not surprisingly, the economic inequality experienced by so many transgender people often leads to a lack of quality health care options.”

I grabbed a cup of coffee over the weekend with trans* forum organizer Rebecca Kling. Kling, a writer and performer, says these health issues were a major concern during her recent gallbladder surgery. In 2010, Kling was rushed to the ER for emergency surgery, and she was worried that the doctor wouldn’t handle her case because of her gender identity. Kling stated, “Going to the ER at 2 in the morning is scary enough without having to worry that my identity won’t be respected. It’s tiring to live in a world where you think everyone is out to get you.”

However, Kling was lucky. When she was in the hospital, Rebcca Kling's mother stayed with her “all day and night” out of fear for her safety. Her mother remembered Rebecca telling her a story about a woman on the East Coast that medics refused to treat when they saw that she was trans*. She died on the side of the road. Her mother couldn't to let the same thing happen to her.

“These issues don’t just affect trans* people," Kling said. "They affect the people who care about us.”

Kling said “the distrust [toward the medical community] fosters a hesitancy toward these structures that are supposed to be there to help us. Even when doctors are caring for trans* people in a positive way, individual compassion only goes so far. We need the right systems in place.” 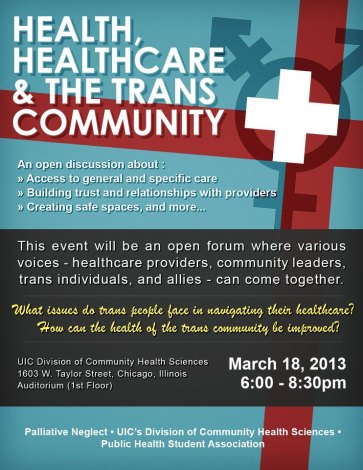 Kling detailed her own struggles with her gender reassignment surgery (or “Vagification,” as she very cleverly puts it) and getting her medical insurance to cover the costs.

“My insurance has a specific exclusion for gender reassignment surgery, and I’m trying to fight that because it’s discriminatory,” Kling said.

Kling explained trasition doesn’t come cheap. For trans* women, there are a litany of options, including hormones, hair removal, trach shaves and reassignment surgery, all of which cost money. Similarly for trans* men, there’s breast removal, hysterectomy and hormones. According to Kling, “even the most inclusive coverage often only covers hormones and assignment surgery. That leaves out a lot."

“This creates an economic barrier to transition,” Kling said. “My ability to transition is a result of having awesome parents, jobs that didn’t fire me and being able to scrape together the money to do these things. Access to medical care is an economic class issue. Being trans is no different.”

A major focal point of the Open Forum’s discussion will be the Affordable Care Act, which, in its essence, bans medical discrimination against LGBT people.

Commenting on an anecdote from Mara Kiesling of the National Center for Transgender Equality, whose friend was denied treatment for anemia because of her “transsexual blood,” The Nation writes,“The Affordable Care Act will end many of these absurd exclusions. In 2014, the Patient’s Bill of Rights will prevent insurance companies from denying coverage based on pre-existing conditions. What’s more, the ACA will bring Title VII federal nondiscrimination protections to the health care field."

However, Kling said that the bill’s implementation and purview is far from perfect. It doesn’t include gender reassignment surgery.

“The Affordable Care Act says that we shouldn’t exclude LGBT people from insurance coverage, but the Department of Health and Human Services says that coverage doesn’t include transitioning,” Kling stated. “That’s a contradiction.”

As part of the national conversation on health care, the queer community is too seldom included in the discourse, and Kling hopes that dialogues like the Trans* Month of Action and the Open Forum will help change that.

“We need to open this conversation up further, because no one person has the same health care needs as any other,” Kling said.

Monday’s forum will include panelists such as Jen Richards of We Happy Trans, Alexis Martinez of the Trans Oral History Project, Channyn Park of the Chicago House and Trans Life Project and Dr. Margo Bell of Stroger Hospital.

As a forum, Kling said they are trying to be mindful of the inherent power dynamics in the discussion and to create a space for discourse, rather than “imparting wisdom onto the audience.” Kling assured me, “We don’t want to tell you what the community needs.”

For Kling, the most exciting part is the variety of perspectives being offered. Although she feels one panel could never be reflective of the breadth of the community, the forum has solicited questions from attendees to further include a diversity of experiences. Many respondents have come up with topics she wouldn’t have thought of.

“Someone asked, ‘How can health care be supportive of non-traditional paths?’ Kling said. "That didn’t even occur to me. It’s not my experience, but it’s valid and important.”

Kling says she’s most excited to see the energy behind the forum.

“This is a conversation that it seems like people are eager for and that they needed to happen," Kling said. "I hope we live up to their expectations.”

The Open Forum on Transgender Health, Healthcare and the Trans* Community will take place at UIC’s Division of Community Health Sciences at 1603 W. Taylor Street on March 18 from 6 to 8:30 p.m. The event will be held in the first floor auditorium and is free and open to the public. More information can be obtained on their Facebook page or by emailing Rebecca Kling at rebecca@rebeccakling.com.