In mid-December I returned from vacation to find a handmade Christmas tree and card inviting me to dinner in a private suburban home hosted by “a crazy hair stylist, a crazy dancer and crazy French Cuisine cooker.”

It was from a man named David Cho, whom I interviewed more than 15 years ago about his nascent karaoke booth business.  My first thought was, “no way.” But I figured I should at least call and decline. By the end of the call with Mr Cho, however, I told him I would go as long as my bosses OK’d it, and I could pay for the meal.

When I told my friends on Facebook that I’d been dining in the in the Northwest suburbs, Tribune restaurant critic Phil Vettel wrote back, “10 minutes from the airport. You'll be over international waters before we know you're missing.”

Sure, it was a risk but one I felt we are all too ready to avoid when it comes to meeting new people and checking out the workd of unknown culinary artists. Right? I invited my mom and 11-year-old daughter, to make sure I wasn’t captured alone.

When we finally arrived, Mr. Cho met us in the parking lot of the very old condo complex. He led us up some stairs to a guy who looked like a Korean Harpo Marx dressed as a chef.  As we entered the dining room/living room of his tiny place we found an elaborately decorated table, pink placemats, crystal. Loud French bistro music poured from the giant TV all night.

I joined the other guests at the table and Hahn disappeared into the kitchen.

Within minutes, the first course was on the table. It was a purplish salad that Hahn said reflected his time in Nice, France.

Cho explained that Hahn was in Paris studying hairdressing when he first became fascinated with cooking. He said Hahn learned as much as he could about French food before returning to Korea to become a famous hairstylist. It has only been since his arrival in the States that he’s started cooking for groups.

Hahn has hosted about 10 of these dinners, spending weeks planning and preparing the meals. Guests are invited from the from the ranks of Hahn's favorite customers at Gloria Hair Art beauty salon in Niles. They often donate money at the end of the meal to help cover food expenses. Hahn works completely alone, as prep cook, chef and server.

“This is his secondary job or like a hobby,” Cho said. “So I don’t know how many times he’s going to do this in the future, making a 10-course meal by himself. He needs a lot of energy. So maybe he’ll do two or three times more. As far as I know he’s more than 40-years-old. I don’t know how much more energy he’s got left. Last time I was here he was even sweating a lot.”

Even though I knew the meal would be a multi-course affair, I hadn’t expected it to be so elaborate. By the 6th course of fried lobster in an apple garlic sauce I was ready to pop. But there was still steak, abalone, sashimi and dessert to come. (see full course list below)

As the meal progressed, I started to understand Hahn’s prominence in the Korean community--if not exactly why I was called here tonight.

It seems that he had become a sort of dancing, hairdresser celebrity in Korea, appearing on talk shows and styling the hair of the stars.

“He’s recognized as No. 1 hairstylist in the Korean community,” Cho said, “And he wants to be known for all of the United States. He is especially known for giving crazy haircuts in 10 minutes.”

“Can he give me a crazy haircut?” I asked.

“He can do whatever you want in 10 minutes,” Cho said. “He doesn’t take long hours.”

We finally finished the meal with a refreshing dragon fruit salad, and Cho announced that it was time to watch videos. These included Hahn's appearances on Korean talk shows, his dance performances and dancing haircutting acts. During some, his clients are even upside down. The final video showed him dancing and styling a red-haired client on stage at Chicago’s Korean Festival on Bryn Mawr Avenue this past summer.

The clips from Korea showed elaborate headdresses that Hahn had created from his clients' hair trimmings.  Some took a year to produce. They have to be seen to be believed.

It was nearing midnight and my daughter was getting sleepy. So we left our donation, offered our deep thanks and we said our goodbyes. Despite my initial apprehension, it turned out that all Cho and Hahn wanted was to share their passion for food with a fellow foodie. And everyone left the experience alive.

As I told my daughter on the way out: this may have been a slightly risky move, but if you pass up every crazy invitation you get, you just may miss out on some magical experiences. 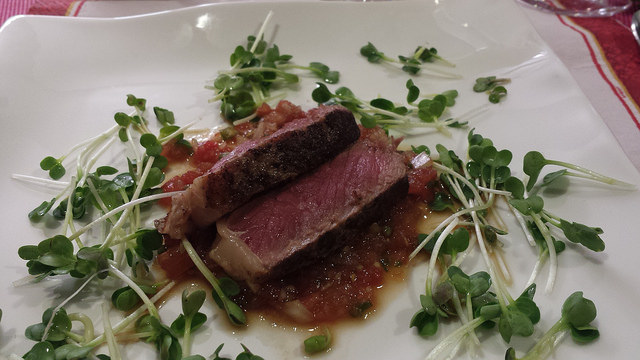