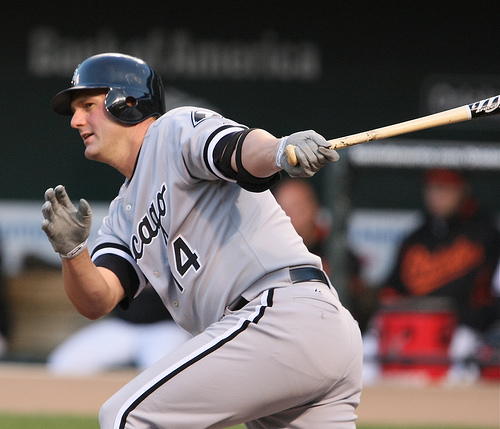 About a month ago, Drew Magary published an astounding little post on Deadspin about some of the most unusual names in 2012. My favorite is “Donathan,” just because it kind of makes sense, yet doesn’t, sort of like “Denjamin” or “Staniel” or “Misterpher.”

Anyway, this got me thinking on the ways people name their kids. Our son is named “Paul” which is a pretty straightforward name, except my underlying rationale for doing so is maybe a little weird. He’s named for a baseball player.

My affection for Paul Konerko has been documented online before, although what used to be a crush has leveled off to a rational appreciation for his hard work, good attitude and odd ability to have a successful yet scandal-free athletic career. So the name “Paul” to me became imbued with those good qualities (incidentally, while the White Sox did lose the night my Paul was born, Paulie K. homered.)

The more I thought about it, I was able to come up with even more good famous Pauls who have brought me happiness throughout my life: Paul McCartney, Paul F. Tompkins, Paul Scheer, Paul Rudd, RuPaul. So why not a Paul for me? A good precedent had been set by the Pauls who had come before him.

I’m not completely alone. A friend of mine named Stephanie was nicknamed “Stevie” at birth due to her parents’ affection for the Fleetwood Mac singer Ms. Nicks. I know a child of some Bears fans who is named Keller because that’s Mike Ditka’s middle name.

I must know other kids out there who were named after athletes and various other famous people, but my coffee intake is low and so I can’t summon them at this time. So please share with me: who were your (or your friends’ or family’s) kids named for that’s in the pop culture realm, and why? Feel free to be totally judgmental of your peer’s decisions.