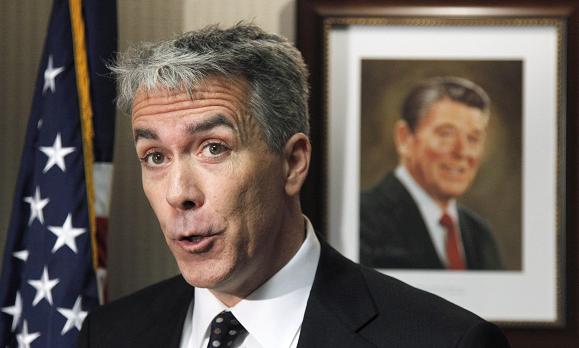 Lead Story: There comes a point when you have to throw your hands up and give credit where it's due. So today, I give credit to Illinois’ Crazy Uncle™, U.S. Rep. Joe Walsh. Sure, I’ve gotten riled up about the outlandish things Crazy Uncle Joe has said in the past, but with his latest volley? Telling Sandra Fluke to “get a job”? Taking another potshot at his opponent, Iraq War veteran Tammy Duckworth, by saying she only cares about her outfit? You, sir, are nothing if not the most consistent candidate out there. You know when to say when and not simply stoop to, “Women love shopping, am I right, fellas? That and staying barefoot and pregnant in the kitchen!” You may be misogynistic and racist, but don’t let anyone ever tell you you’re a flip-flopper.

Also: Hey, it’s Illinois’ other Crazy Uncle Joe, Cook County Assessor Joe Berrios, and this time he’s got a huge tax bill for his constituents because he’s above ethics laws. Back in 2010 after he won re-election for his spot, Berrios added his sister and his son to his payroll and has since claimed it’s totally OK because ethics laws don’t apply to some elected officials like him. Like with Walsh, I have to give Berrios credit for having the balls to say, “Yeah, I did it, but it’s totally OK!” Berrios, who is also the Cook County Democratic Party chairman, hired a private lawyer to fight the charges and, you guessed it, that bill is being footed by taxpayers, according to the Sun-Times. Berrios also has a daughter on his payroll (who hasn’t come under scrutiny yet), and another daughter who just barely won her state rep seat primary this spring. Illinois: The Clout State.

And then: In the wake of the teachers’ strike, many local media outlets dug up a story from over the summer that seems all the more appropriate now: Mayor Rahm Emanuel’s decision to send his own kids to the private University of Chicago Lab Schools. That action by itself shouldn’t stir much trouble for the mayor. But the tenor of that decision has changed dramatically, at least in the eyes of the media, now that the public school strike and Emanuel’s attitude towards the CTU are making national headlines.

RIP: Ron Taylor, renowned Australian marine conservationist who helped with the filming of Jaws, at the age of 78. Taylor and his wife shot some footage of great white sharks later used by director Steven Spielberg in his legendary film. According to family members, Taylor and other shark-lovers often felt conflicted about their role in the film which terrified swimmers and beachgoers and portrayed the sharks as monsters.

The first teaser for Steven Spielberg’s film Lincoln, starring Daniel Day-Lewis as the titular president, is out… and advertises the premiere of the film’s first full trailer on Thursday. Weird. But whatever. This film is going to win all the awards.