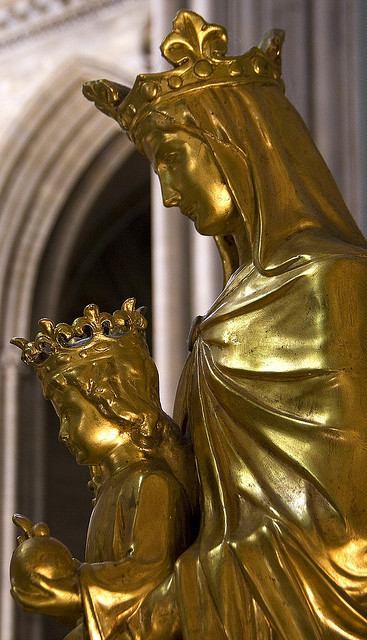 This internet exploded last week when it became potentially possible that Jesus was not the saint you might think, as a scrap of paper revealed he had potentially been married.

But "The idea that Jesus was married does more than make the New Testament more saleable as a Lifetime mini-series," said James Finn Garner at The Paper Machete. "(You know somewhere the concept has been pitched, and a producer has said, 'I like the story, but this guy Jesus, he needs to be sexed up.') If the scrap proves to be accurate, it might shake the foundations of the Christian church as we know it, at least until the church as we know it squelches it." Read an excerpt below or listen above:

The scrap, cut from a larger scroll, contained seven lines of sentence fragments. Among these were the words: “Jesus said, My wife.”

Now, I’d like to get address the elephant in the room right now and head straight for the Borscht Belt treatment:  Jesus said, “My wife wants to take a vacation, spark up our LOVE life. Wants to go to the Dead Sea. I say, Why the Dead Sea? She says, it reminds me of our love life.”

And also:  How can you tell that Jesus was married? He brings 5000 people over and then asks, “Hey, we got any food?” I like that one better.

The headlines screamed the predictably sensational question,“Was Jesus married?” The expert from Harvard answered strongly that she had no idea. The sentence wasn’t complete, it had no context, the scrap had been cut from a larger papyrus we don’t have. It was written 150 years after the death of Jesus, who as you remember, was someone prone to speak a little cryptically. It could have been the start of a parable, analogy, mystical figurative allusion, or something else.

But I ask you, what’s more fun, scholarship or baseless conjecture?  Then let’s get to it.