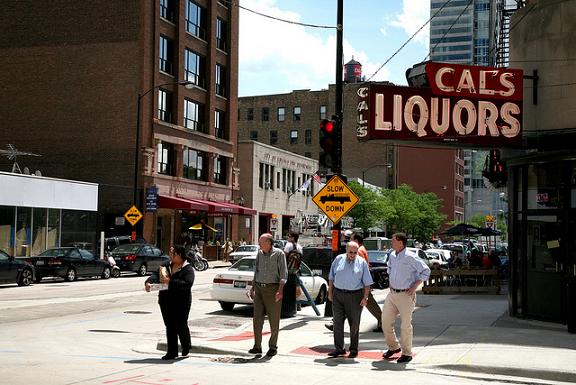 Lead Story: On Friday, federal agents arrested a suburban teen on terrorism charges after he allegedly tried to set off a bomb outside a downtown bar. The bomb was planted by undercover agents who had been in contact with the teen - who had bragged about his plans online – for several months. While officials haven’t said which bar was the target, the owner of Cal’s Liquors at Wells and Van Buren told the Sun-Times he believes his bar was the target. (Not to make light of the situation, but having visited both Cal’s and Cactus, the much more popular bar next door, something tells me Cal’s probably wasn’t the main target.) While there are certainly echoes of the 2010 arrest of a man who attempted to plant a bomb in a Wrigleyville trash can and the Liberty City six who plotted to bomb the Sears Tower, there are also echoes of the trial of Tahawwur Rana, a local man who, along with David Headley, another local man, were charged in being minor accomplices in planning the 2008 Mumbai terror attacks as well as plotting attacks in Denmark in response to the controversial cartoon portraying the prophet Muhammad. Which brings us back full circle to the recent Innocence of Muslims controversy and ensuing attacks on U.S. embassies overseas.

Also: Things are getting interesting around here with the ongoing teachers strike and its overlap with the union situation in Wisconsin, which itself is now a battleground state in the presidential election. With Mayor Emanuel’s claim that he’ll get a court injunction to force teachers back into class, he’s taking a hard anti-union stance that probably feels familiar to pro-union supporters from Wisconsin. In fact, a large group of Wisconsin teachers joined this weekend’s CTU rally to show support even as a judge struck down parts of Wisconsin governor Scott Walker’s controversial union busting law. The Wisconsin state attorney general has already promised to continue to fight the ruling through appeals. So as Emanuel’s fight against the CTU gets notice north of the state line, his ties to Obama could prove a negative influence on Obama’s fight to keep Wisconsin in the blue.

And then: The city’s violent year continued this weekend with several more wounded and at least four dead from weekend shootings. Yet it was actually overshadowed by another violent incident that, while sensational, didn’t prove deadly when an argument outside the State Street Macy’s culminated in one man throwing another through one of the store’s windows. Aside from the shootings and the State Street incident, an incident in the Hermosa neighborhood left two men stabbed and two women beaten. If there’s any silver lining – and that term is obviously used loosely – at the halfway point, this month is still behind September 2011’s murder rate.

RIP: New Orleans blues musician James “Sugar Boy” Crawford at the age of 77. No city weaves its music into its cultural tapestry quite like New Orleans and Crawford will forever be a part of it, namely for his song “Jock-A-Mo.” The song was later recorded by The Dixie Cups as “Iko Iko” and other variations of the song have been covered by a legion of legendary artists. But Crawford’s career was deeper than just one song and also notable for the way it came to a tragic, premature end: he was pistol-whipped by police in a 1963 incident which resulted in brain injuries. In recent years, though, he had been making more and more public appearances, including taping a scene for an episode of the upcoming season of HBO’s Treme.

Finally
It’s Monday so start the week with some amazing facts to blow your mind. [via The Daily What]