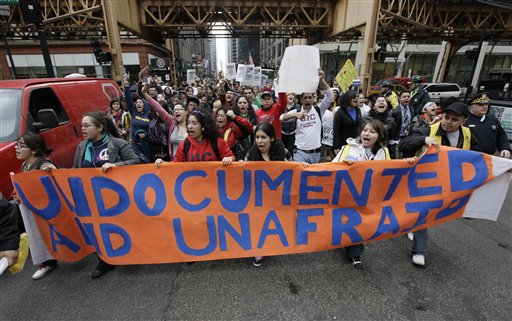 Lead Story: On Wednesday the Chicago City Council passed an ordinance designed to protect undocumented immigrants. Dubbed the “Welcoming City” law, the bill means local authorities won’t cooperate with federal officials when the only reason for issuing a warrant is the suspicion the resident is an illegal immigrant. The city hopes undocumented immigrants will now report crimes without fear of retribution, but as the Tribune noted, the law is largely symbolic. Nonetheless, the bill's sponsor, Ald. Joe Moore (49th), told CBS 2, “It sends a strong message. It codifies what’s been part of city policy and executive order for some time, that if you go to the police; if you have an encounter with the Chicago Police Department, you don’t have to fear that you are going to be turned over to the federal immigration authorities.”

Also: Amtrak ridership has increased each of the last 11 months and by the end of the fiscal year in September the agency will set a new record of riders in a year. The ridership increase is also evident in Illinois, where U.S. Sen. Dick Durbin heralded the increase as good news. But as the presidential election draws closer, the agency may still find itself in the line of fire. The GOP platform adopted at the party’s recent convention includes cutting out over a billion dollars in federal funding to the agency, which operates at a loss and relies on the government funding to stay afloat. So the old argument over the role of government is resurrected anew, as the GOP tries to privatize what it can and Dems want to keep pouring money into Amtrak’s bucket.

And then: Speaking of transit, yesterday the CTA listened to more impassioned pleas from residents not to cut bus service on 12 routes as part of its “de-crowding” plan — and once again dismissed everything it heard and voted to enact the cuts anyway. I’ve gone on at length about why the CTA’s plan is a giant plate of polished poop so I won’t go over that same territory again. But how frustrating it must be to voice your complaints time and again, only to know you’re doomed anyway.

RIP: Sharon McGhee, former host and news director of WVON, at the age of 55 after a battle with ovarian cancer. Besides her broadcasting accomplishments both here and in her hometown of St. Louis, McGhee was a veteran of the U.S. Army and a playwright; she was the author of The PocketBook Monologues, which was performed at Steppenwolf.

Because you always wanted to know where that iconic ESPN SportsCenter theme came from.