The blocks around 47th Street and California Avenue in Brighton Park are filled with a pretty typical Chicago mix of structures: workers’ cottages, two-flats, old warehouses and a sprinkling of gas stations and fast-food restaurants. Then there’s a building on the southwest corner — bright orange, angular and futuristic.

What’s That Building? This Chicago Industrial Park Was The Nation’s First

The building is a health care facility built by the nonprofit Esperanza Health Centers in partnership with social service nonprofit Mujeres Latinas en Acción. The $17 million project finished in May, according to Esperanza Chief Operations Officer Carmen Vergara.

Esperanza provides health care services to underserved communities in mostly Latino parts of the city, including Little Village, Marquette Park and Brighton Park. Vergara said they currently operate three clinics out of leased space in vintage buildings and in 2017, set out to build their own facility in Brighton Park.

Esperanza “wanted patients to have a Lincoln Park experience of medical care on the Southwest Side,” Vergara said.

“We wanted to project warmth,” she said. “Nothing sterile.”

What they got, thanks to the Chicago architect Juan Moreno, is anything but sterile. Here’s a look inside the building, other colorful projects by Moreno and the future of the Brighton Park corner.

The first floor includes a pharmacy, medical testing lab, demonstration kitchen and rooms for meetings, yoga and Zumba classes. The lobby space is paneled in wood that’s set at an angle which sends seams dashing across the wall. It’s a low-cost way to make a standard material fit Moreno’s design concept, which centers on motion and activity.

“The site had been vacant for so long, it was a bit of a painful reminder of the lack of investment in the community,” said Moreno. “We immediately knew wanted it to be a celebration of wellness.”

The second floor houses 30 exam rooms, all fitted out with brand new furnishings and equipment, according to Vergara.

The spray of windows that decorate the building on the outside prove functional inside these exam rooms. Relatively small and high up, the windows let in natural light without compromising patient privacy.

“What we tried to achieve was that the clinical spaces … still get daylight,” Moreno said. “Although they preserve privacy, there’s a physical connection to daylight through that punch in the wall.”

The biggest cluster of windows, in the middle of the 47th Street façade, illuminates waiting areas where privacy isn’t as much of an issue.

Other colorful Chicago buildings designed by this architect

The architectural firm behind the project, Juan Gabriel Moreno Architects (JGMA), are responsible for other Chicago buildings with out-of-the-ordinary shapes and vivid colors, including the Northeastern Illinois University El Centro, visible east of the Kennedy Expressway between Belmont and Addison Avenues.

The group has also designed Jovita Idár Elementary School, a Gage Park charter school that looks like a dismantled jet liner made of chrome and green glass, and Cristo Rey St. Martin College Prep, a bright blue and green high school in Waukegan that was once a former big-box retail store. 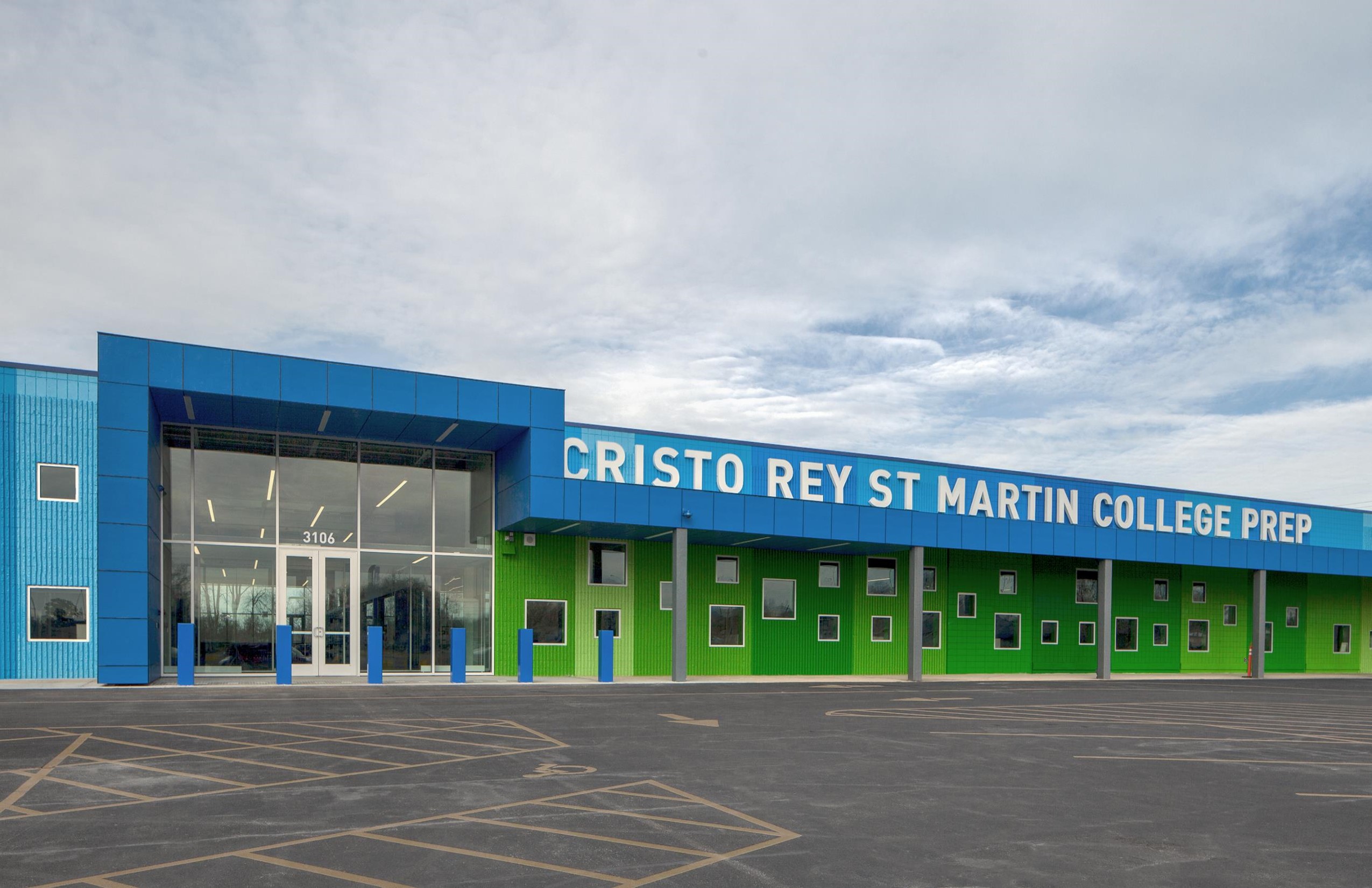 Esperanza’s space in Brighton Park is about three acres — the eastern part of an eight-acre site where a 300,000-square-foot RC Cola bottling plant stood from 1917 until about 2008.

Esperanza originally hoped to build a larger building, V-shaped with legs along both California and 47th, but scaled back on its plans after Sinai Health System, which operates hospitals and health facilities on the West and Southwest sides, dropped out of the project. So the constructed building has only one leg along 47th, but Vergara said it may still expand in the future.